Concrete Jungle Where Loans Are Made: NYC Lenders Talk Relationships 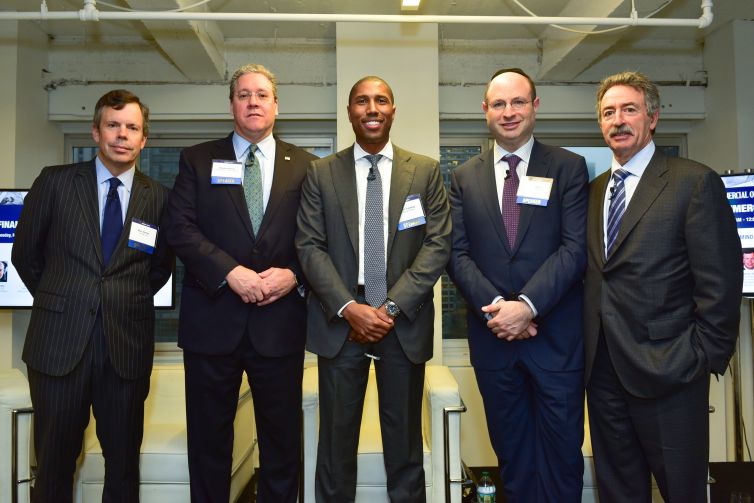 Jay-Z sang about it, and Commercial Observer’s panelists talked about it. While the former was likely onstage at Barclays Center, the latter were discussing lending hotspots in CO’s ‘Empire State of Mind’ panel at 666 Fifth Avenue.

Ralph Herzka, the chairman and chief executive officer at brokerage Meridian Capital Group, said that while the world may believe that banks will come out on top with Trump as president, “We’re in the middle of the storm. We just need to let the dust settle and we’ll figure it out.”

Interest rates were a hot topic. Benjamin Stacks, the New York City area market manager of commercial real estate at Capital One, said that while a huge spike in rates would be problematic, a little rate increase never hurt anyone. “In a measured way, it’s a good thing. A little more inflation is a good thing for real estate.”

Chad Tredway, the head of commercial term lending east and head of real estate banking sales and strategy at J.P. Morgan Chase noted “how quickly Treasury rates can move, and how macroeconomic events can really affect that.”

When the chatter turned away from the president-elect and instead to construction lending, the panelists agreed that a conservative approach is key, with sponsorship and experience paramount in their consideration of projects to lend on.

Steven Kenny, the senior vice president at Bank of America Merrill Lynch, described a good sponsor as being a firm with “time-tested character.” When considering the sponsor’s balance sheet, Kenny said he asks whether there is liquidity and scale, and whether the firm has the ability to weather certain events. Afterall, the risk profile of a construction project can make or break a loan.

“We really believe that banks don’t get paid enough for the risk their clients want them to take,” Herzka chimed in.

For newer or unestablished developers, reputation can help, agreed panelists. The same holds true for other industry participants, including banks, said Stacks. “A lot of what we do is reputation-based,” Stacks said. “Coming out of the recession, we weren’t on the map. We developed a reputation and showed that we could stand shoulder to shoulder with other banks.”

When all else fails and a borrower has to hand back the keys to a property, panelists agreed that while it’s not an ideal history to have on record, it needn’t necessarily prevent future deals being done. “It’s less about what occurs and more about the borrower’s conduct and integrity,” said Kenny, who noted that bankruptcy, however, is a “no-no.”