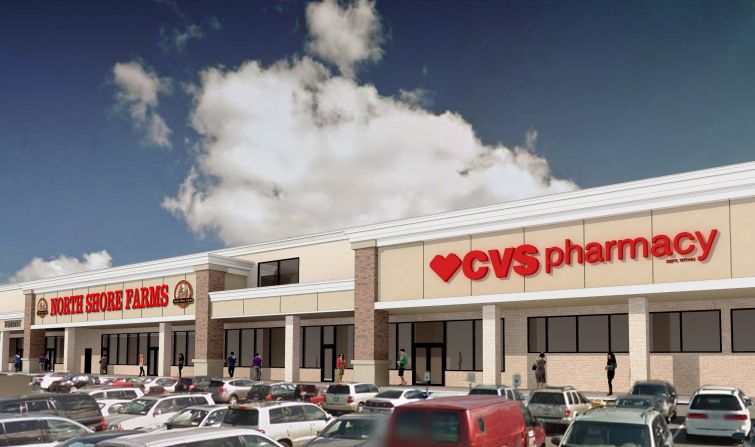 A rendering of North Shore Farms and CVS/pharmacy at 153-01 10th Avenue.

The Feil Organization has signed two leases totalling 36,000 square feet in a Queens shopping center it acquired three years ago, according to a press release from the landlord.

Long Island-based grocery store North Shore Farms signed a 23,818-square-foot lease at 153-01 10th Avenue in the Whitestone section of the easternmost borough. The supermarket will occupy a portion of a former Waldbaum’s space in the two-story 62,000-square-foot building at the corner of 154th Street and 10th Avenue. The landlord declined to provide the asking rent in the 20-year deal.

“We are proud to serve the community of Whitestone and bring quality services and products that will fulfill the needs of local residents,” Nicholas Forelli, the director of leasing at Feil, said in a prepared remarks. “Our goal is to revitalize, maintain and operate a viable shopping center that will enhance the community and local economy, making Whitestone residents proud.”

Forelli and Randy Briskin represented Feil in the deal in-house, while North Shore Farms did not have a broker in the deal.

The Whitestone location will be North Shore Farms’ first outlet in New York City. Construction has already commenced on the store, which will open in summer 2017, as the Queens Courier reported. It has six locations on Long Island. It sells prepared foods, gourmet items and locally sourced meats and produce.

“This is our first store in Queens, and we’re extremely humbled by the encouragement of the community,” George Tsiatis, a spokesperson for North Shore Farms, said in a statement. “We look forward to serving them and being an active participant in the neighborhood.”

In addition to the grocery store, CVS/pharmacy has inked a 15-year deal for 12,000-square-feet at the shopping center. The landlord declined to provide the asking rent in this deal as well. Esther Bukai of Ripco Real Estate represented the pharmacy in negotiations. Bukai did not immediately respond to a request for comment. The drugstore will have a drive-thru at the location.

“CVS has been seeking locations in the area for quite some time, and the ability for this location to accommodate their drive-thru prototype brings a level of convenience to the shopper that CVS could not achieve in other locations,” Forelli said.

Feil purchased the Whitestone building in December 2013 for $23.9 million from Onyx Equities, according to property records. Feil has since made upgrades to the center, including refurbishing the exterior and interiors, renovating windows and brickwork, and installing new insulation systems and lighting.

At the time when Feil acquired it, the shopping center was anchored by a 40,000-square-foot Waldbaum’s, which closed in November 2015 following the second bankruptcy of the Great Atlantic & Pacific Tea Company.