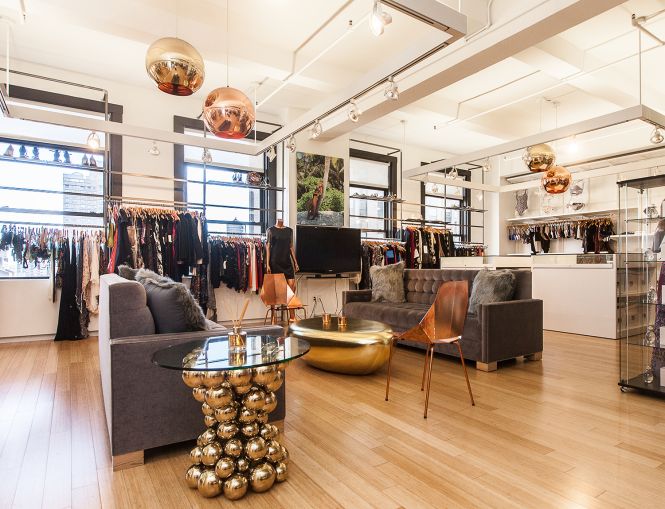 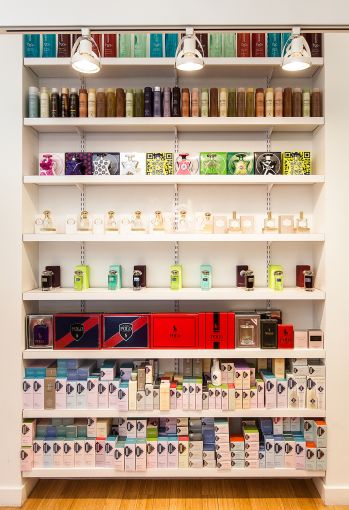 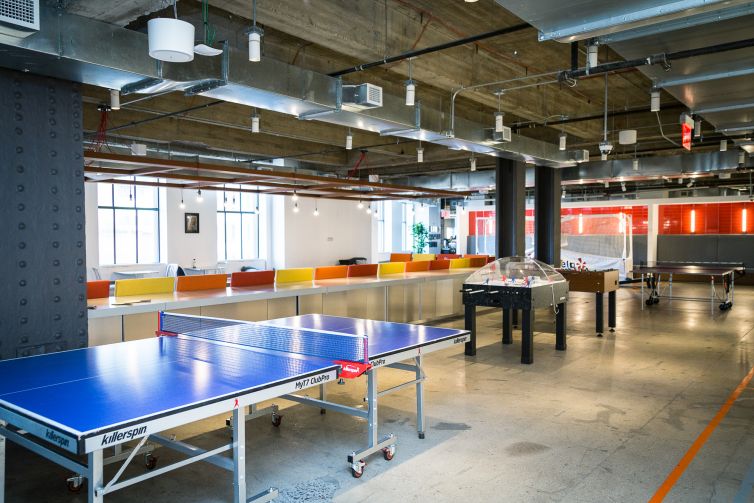 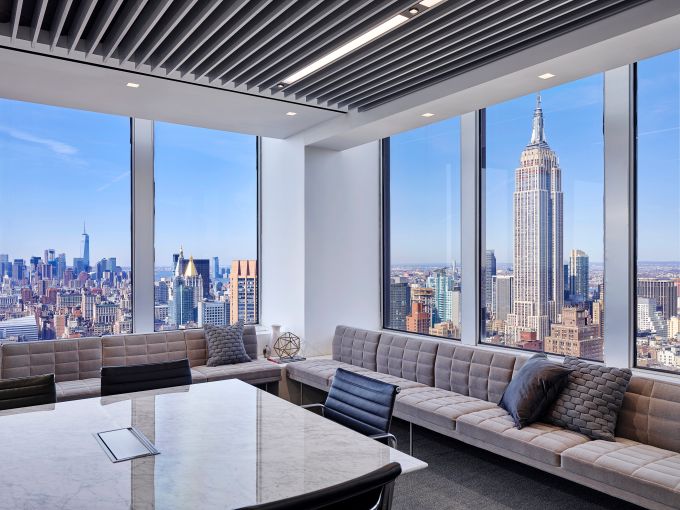 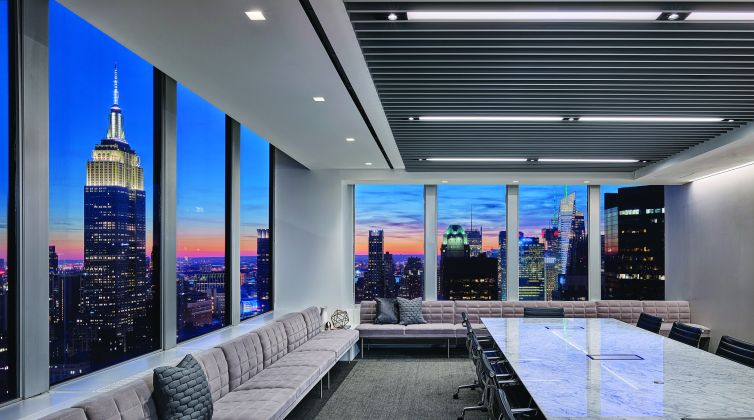 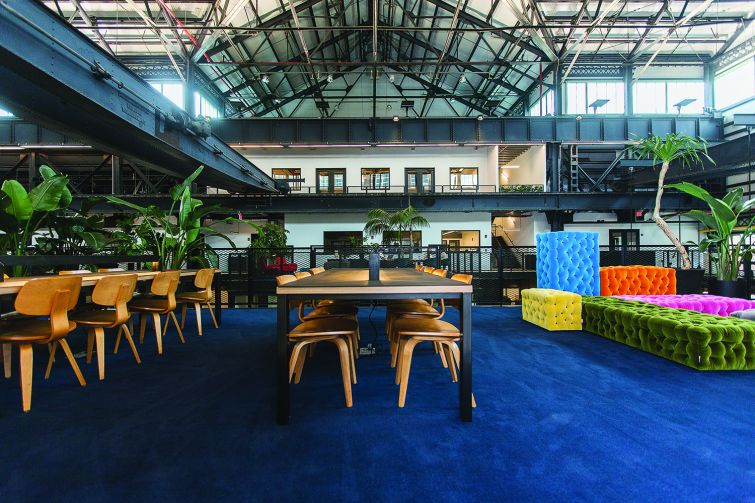 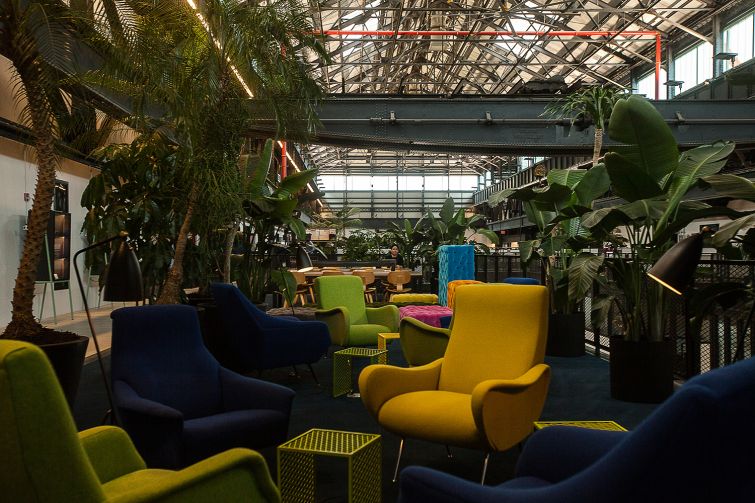 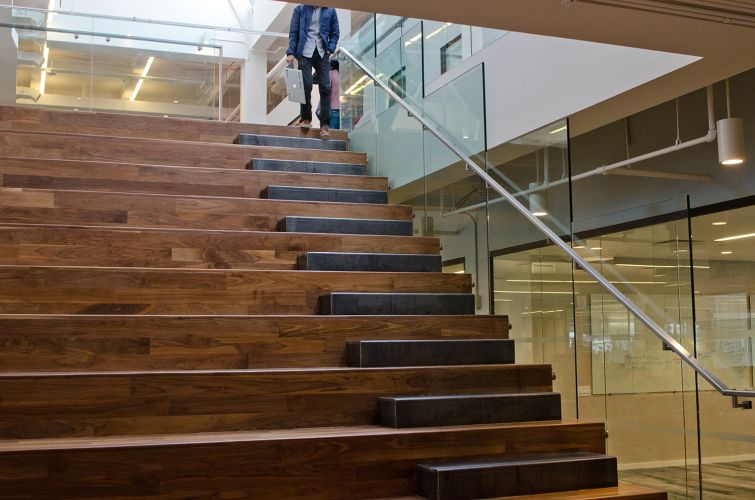 Yodle's interconnected staircase is part of a modern, open office, which features desks with treadmills in its latest expansion. Photo: Molly Stromoski For Commercial Observer. Liam La Guerre
Previous Next

Never has “the office” been more synonymous with home than today.

No longer does one miss the pleasures of comfy furniture or ready snacks because of long hours at work, as the modern office itself has been converted into amenity-laden stations, for today’s workforce to feel at ease—like home, with your work family.

So we’ve put together our list of some of the best offices, most unique offerings and greatest aesthetics, which should make employees of other firms a bit jealous.

Take Alison Brod Marketing + Communications’ 10,000-square-foot office on the 12th floor at 440 Park Avenue South. The space features an entire fashion showroom with clothes, shoes, cosmetics and fragrances by top brands like Ralph Lauren and L’Oreal, available for use by its 65 employees.

And as one would expect, Yelp has vast food offerings. The company (a user-based restaurant reviewing website, for those of you living under a rock) has two cafeterias, a coffee shop, a bar and a snack area, which has an array of cereals, chips, health bars, fruit and nuts at its 11 Madison Avenue digs.

Alison Brod Marketing + Communications Besides its fashion showroom for employees, Alison Brod’s offices also feature a small salon with a hair washing station and two salon chairs, and weekly visits from manicurists and celebrity stylists. And of course a wall of fragrances.
Yelp Along with its array of food choices we mentioned, Yelp has a game room, which offers two table tennis boards, a foosball table, table hockey, shuffleboard, corn hole and two basketball shootout games.
Polsinelli It’s a serious challenge to get a full New York City skyline, when one happens to be located in the middle of the city. But the view from law firm Polsinelli’s 42nd floor conference room at 600 Third Avenue manages to include the iconic obelisk-like 1 World Trade Center Downtown, the classic Art Deco Empire State Building in Midtown South and even One Bryant Park in Midtown.
New Lab New Lab in Brooklyn has one of the coolest pieces of furniture ever: a sofa made of materials derived from mushrooms. But the innovation doesn’t stop there. There are couches that are fashioned like Tetris blocks (right) and Herman Miller Eames-style chairs that are dotted along communal desks.
A another view of New Lab's funky office furniture.
Web.com Marketing firm Web.com (which purchased Yodle) gets top efficiency marks for its interconnected staircase that joins floors 17 and 18 at 330 West 34th Street. That staircase doubles as bleacher seating for employees to use while eating lunch, doing tech demos, meetings or presentations. But it also has an 11-foot screen above with a projector system, which has been used for movies, sporting events and video games.
11 Madison Avenue, 330 West 34th Street, 600 Third Avenue, Alison Brod Marketing + Communications, Brooklyn Navy Yard, L’Oreal, New Lab, polsinelli, Ralph Lauren, slideshow, yelp, Yodle
Finance  ·  Construction
Florida