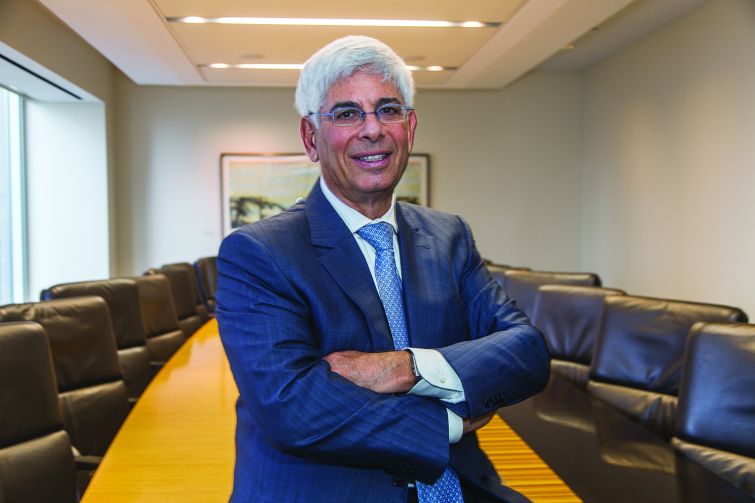 Jay Neveloff, a partner and the chair of Kramer Levin Naftalis & Frankel’s Real Estate Practice, is working on some of New York City’s hottest real estate transactions. He’s representing Related Companies in the transformation of Hudson Yards, the Nederlander Organization in the Palace Theatre’s elevation and renovation and Anbang Insurance Group’s investors in the sale and conversion of the iconic Waldorf Astoria New York hotel. Oh, and he’s also Donald Trump’s go-to attorney for all real estate-related activity.

Neveloff spoke with Commercial Observer about some of his projects, how additional value is being found in real estate through adaptive reuse of space and why the Big Apple will always be a Mecca for investment.

Commercial Observer: Are you a New Yorker, born and bred?

Neveloff: Yes. I was born and raised in Bensonhurst, Brooklyn, and have lived in New York City my whole life. I joined Kramer Levin in 1988, so I’ve been with the firm for 28 years now.

What is your main focus at Kramer Levin?

Transactionally speaking, it’s a lot of buying and selling. We do a lot of development work, and right now I have a very active foreclosure/ bankruptcy that I have been spending a fair amount of time on. I’m also working on some joint ventures. The market has cooled a little in speaking with some people, but you could never tell it by my office. We’re extraordinarily active.

Tell us about the foreclosure bankruptcy case that you’re working on.

It’s on the development side at [428-432 East 58th Street], off Sutton Place. We are representing the lender.

I understand that Gamma Real Estate lent $147 million on the project and that the debtor—Bauhouse Group—defaulted in January and filed for bankruptcy in February, delaying the foreclosure sale that Gamma is now seeking. What’s the latest status?

It’s proceeding. There is a hearing [this week] in bankruptcy court—our client’s motion to end exclusivity. I believe there will be a sale in bankruptcy court this year. The judge hasn’t set the date but has been clear that he wants the sale to occur within this calendar year, so we expect it will be in November.

It’s going to end up being a textbook case on how the debtor and the people supporting the debtor can exploit the bankruptcy laws solely for the purpose of delaying foreclosure. What’s apparent is that they have done nothing to advance the project or protect the property, nor any stakeholders’ interests other than their own. They are using the resources of the unsecured creditors to fund the extensive legal fees the debtor is running up pursuing pointless litigation simply to stall. The debtor has done nothing constructive to help the project.

Does the general lack of restructurings in New York City speak to the health of the market?

Absolutely. New York is a Mecca for investment, and it’s not only domestic investment; it’s foreign investment. We see a lot of factors driving this investment in the New York market, including currency and the safety and track record of New York compared to the rest of the world. I think Brexit was overplayed, but I think that the issue it caused was another reason for foreign investors to recognize the stability of New York. Brexit has come and gone—it was an isolated incident that got overplayed in the press. I think the fundamental outcome is how strong and vibrant the New York market is.

Do you see the upcoming presidential election affecting the New York City real estate market at all?

Everyone is talking about the election but in the context of affecting the real estate market? No, not at all.

I do, so I’m biased. It’s a terrific relationship—I’ve worked with him for over 30 years on virtually every real estate project he’s done in New York. And that’s a lot of projects. We did the Trump Building at 40 Wall Street, the Plaza Hotel, the General Motors Building—there are so many. We continuously work on small maintenance projects, servicing existing deals. Donald hasn’t developed a building in New York for a number of years, but I’ve done just about all of [his real estate projects].

Who are some of your other clients?

Our client base is across the board. From private equity firms—Westbrook Partners, DLJ Real Estate Capital Partners, CIM Group, Fortress Investment Group—to foreign investors who are representing Anbang Insurance Group in numerous aspects of the Waldorf Astoria hotel transaction. We also represent a lot of developers—Related Companies in Hudson Yards and the Nederlander Organization in the Palace Theatre deal. We also represent the capital source as a lender in that deal [Fortress].

The Palace Theatre renovation—lifting the theater up 30 feet to allow for a retail component underneath—is pretty incredible, what are your thoughts on it?

It’s emblematic of what’s happening in New York and where the real estate market is, because people are choosing far more complex projects and readapting space to get more value out of it. That is exactly what the Palace project represents. Part of the deal is aggregating signage, and signage in Times Square is like gold.

I love the ingenuity of it, and I think it foretells what we’re going to see happening, that very creative, brilliant people are going to start looking at real estate and say, “O.K., how can I better use this real estate and adapt it in a way that is cost-efficient but reflects changes in the market?” I’m very excited as it won’t change Broadway, but it will enhance it, and the theater district. A lot of this is Paul’s [Paul Boardman, the New York development principal at Maefield Development, developer of the Palace Theatre renovation] vision, and he’s brilliant.

How are your developer clients finding the construction financing market right now?

The stronger, better-capitalized developers are finding the financing in the marketplace. The less-capitalized, newer developers—who we tend not to represent—are having some difficulty. On the other hand, there are more sources of financing because you see that a lot of the private equity firms who were making equity investments are more willing to provide construction financing. It may not fill the void, but it may fill a part of the void.

What are the trends you are seeing?

Geographically, I’m seeing a lot of emphasis on Long Island City in terms of development, and I actually think that is the new gold coast. It was Williamsburg, but Williamsburg is very pricey right now, and Long Island City is gentrifying with neighborhoods being created along with the transportation.

I also see the trend that I mentioned in talking about the Palace Theatre, in the adaptive reuse of space in creating value and being imaginative and looking at a piece of real estate and saying, “How can I make this more valuable?” We have the biggest condominium practice in the state; we have people looking at office buildings in the Times Square district and trying to better capture revenue from signage, so we have buildings that we’re creating condo regimes for so that you can segregate the signage revenues and finance it or sell it, or do anything—much like we saw over the past several years with the real estate component.

Which projects will be keeping you busiest as the year-end draws near?

The Waldorf Astoria hotel, the foreclosure bankruptcy by Sutton Place and Hudson Yards. There is so much going on. Between what Related is doing with Hudson Yards and what Brookfield [Property Partners] is doing [with Manhattan West], the center of the city is moving west. People are thinking about it as only office development, but there is an immense amount of residential that will be built around it.

We are also representing some owners of medium extended-stay hotels who are looking at selling some of the units to individuals as condos. It’s an interesting niche in the market. You have people who travel to the city for business or pleasure and they want to know that they have their toiletries, their pillow, a change of clothes there. They use [the condo] enough that it makes more sense for them to own here, and then when they are not in town, it is rented out.