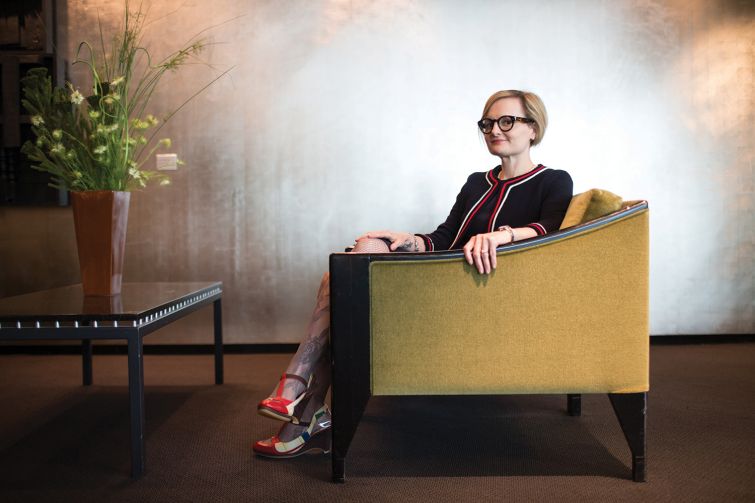 You could say that Erica Buckley has a pretty strong connection to Lower Manhattan.

The native of a Saratoga, N.Y., suburb lives with her husband and six-year-old son on the Lower East Side. She attends Trinity Church on Broadway. And has had an office Downtown since at least 2007.

This January, Buckley closed out a major case as a state regulator against a prominent landlord in New York City who was redeveloping two Financial District properties. But by February, she packed up her office at 120 Broadway, where she had spent eight and a half years working in the New York State Attorney General’s office—her last several years running the real estate finance bureau.

Then, in March, she moved to a new office at 180 Maiden Lane, where she now works as special counsel in the real estate and government relations practice at Stroock & Stroock & Lavan. However, moving from a government law office to a private firm with a national presence is not simple. Buckley, 42, has spent the last few months adjusting from being a prosecutor to a lawyer representing real estate developers.

“I’m figuring out really everything about the real estate landscape from a different angle,” Buckley told Commercial Observer at the firm’s offices in June. “I’m also working very closely with my colleagues to figure out the business development side of things, which is very exciting for me.”

A graduate of the City University of New York Law School, Buckley said she’s now focused on transactional work. She specifically works in the cooperatives and condominium group, advising the firm’s clients on building in New York City. Because the general nature of most Big Apple development work involves affordable housing these days, it’s also an issue she plans to discuss on panels and in legal articles as she cuts out a new niche for herself.

After all, the 421a tax abatement that has provided so much affordable housing has expired, and the city has pushed for new zoning policies to create more below-market-rate apartments.

“You have to announce to the world that you’re no longer on the regulatory side,” said Ross Moskowitz, a partner at Stroock, who brought Buckley to the firm. “You’re actually on the private side now.”

Indeed, it’s been some time since Buckley has not collected a paycheck from the State of New York. She joined the attorney general’s office in 2007, just as Andrew Cuomo took office as the Empire State’s top prosecutor. Cuomo, the former secretary of the United States Department of Housing and Urban Development, came into office with an emphasis on affordable housing and providing additional funding to the real estate finance group.

Having communicated some with the attorney general’s office, Buckley expressed interest in the real estate group because of the role government could play in the building industry.

“My whole push was that I would like to bring my knowledge and expertise in affordable housing to the real estate finance bureau,” she said, “because I think this is an area of law that the government should be more focused on.”

Buckley had served as general counsel to the Urban Homesteading Assistance Board, a citywide nonprofit that assists groups of residents to become limited equity co-ops and also organizes tenant associations in rental buildings so they can resolve problems with their owners. She started at the firm as a project manager, eventually establishing the organization’s legal department.

Andrew Reicher, the executive director at UHAB, said that Buckley was a great asset to the organization, helping it establish a legal department when it began doing actual development. Rather than use outside counsel, UHAB realized it needed an in-house attorney, to handle all of the transactions related to the conversion and financing of projects.

Once UHAB lost Buckley to the attorney general’s office, they still worked together, but on opposite sides of the table; Buckley worked with the city to create an expedited offering, which “standardized the process of the co-op conversion for anyone doing limited equity co-op conversions,” Reicher said, noting, “That was a big help.”

That experience made her a specialist in mediation at the attorney general’s office, focusing mostly on construction defects.

“It actually was a lot of fun,” she said. “I learned how to really hone in on my negotiation skills. I also developed a real appreciation for what is involved in building a building in New York City. I think mistakes happen.”

A year in, the real estate market plummeted thanks to the Great Recession. The department dealt with hundreds of cases in which condo buyers were trying to get out of contracts, and financially damaged developers were trying to hold onto properties.

“It was insane,” Buckley said. “We tried to look out for purchasers but at the same time knew that developers were really being harmed by the financial crash as well.”

By 2011, she became a section chief within the bureau. That was the same year Cuomo became governor and Eric Schneiderman replaced him.

“He is incredible proactive,” she said of Schneiderman. “He is so thoughtful, he is very innovative.”

Schneiderman promoted Buckley to the group’s bureau chief in 2013—making her responsible for a 45-person team including lawyers and staff. Buckley, who describes herself both as progressive and pro-development, said leading the organization required constantly striking a balance.

“Tenants are not always right, but many times they are being mistreated,” she said. “Developers, most of the time, they want to do their thing: get a profit, nothing wrong with that. It’s only a few that are doing things that are really not okay. We’re all human, we all are different.”

One of her last cases at the attorney general’s office involved a major settlement with Africa Israel Investments over allegations that it did not properly convert two Lower Manhattan properties and one in Brooklyn into condo—leaving them with poor amenities, questionable electrical wiring, risks to safety and hazardous mold.

Africa Israel agreed in January to fix problems at 15 Broad Street, 20 Pine Street as well as 85 Adams Street in Downtown Brooklyn, hand control of the buildings over to the respective condo boards and pay $2 million for benefiting from a since-defunct property tax.

“Erica made tremendous contributions to our real estate finance bureau throughout her tenure at the attorney general’s office,” Schneiderman said in a statement via a spokesman. “At a time when families in New York City are scrambling to find affordable housing, our office was able to preserve and restore thousands of affordable units thanks to Erica’s leadership and dedication. Erica worked to modernize our bureau so it is ready for new challenges in the coming years as we work to address the critical housing issues facing New Yorkers.”

Buckley had extremely tender feelings about the attorney general’s office. “I got married there and had my son there,” she said. “I really became an adult at the AG’s office.” But she began to wonder about the private sector.

She met Moskowitz through the New York City Bar Association where they both led committees: Buckley chaired housing and urban development, while Moskowitz chaired zoning and land use. They decided to have lunch to discuss her options. Moskowitz said upon their first meeting, Buckley was “high energy, smart, very focused” and “very thoughtful in what she wanted to do with her career.”

Of course, when people in leadership positions put themselves on the market, the phones are likely to be off the hook.

Buckley recalled a conversation with a fellow CUNY alum who works in public interest law on whether she would join Moskowitz’s firm.

“He said, ‘Are you going to be working with Ross?’ I said, ‘Yes.’ And he said, ‘Erica, he is one of us. They do really top-notch interesting work and they really care about the clients and the city,’ ” she recalled. “So I chose Stroock because of that. Also in terms of real estate, which is my passion and my interest, it just provides an amazing platform for me.”

It also helped that, in a way, she would  be working at the same place as an attorney general—Robert Abrams, a partner at the firm who served as top prosecutor from 1979 to 1994. Buckley said Abrams’ tenure and cases as attorney general were constantly referenced when she worked in the bureau. “He was a tremendous inspiration for me and the work that I did at the attorney general’s office,” she said.

Going back and forth between government work and real estate law is actually common practice. Moskowitz, who started at Strook in 1987, served in the Giuliani administration. Then there are those who have made the leap several times. Take Oliver Koppell, who succeeded Abrams as attorney general and does not know Buckley. He has bounced back and forth between the public and private sectors—serving in the New York City Council from 2002 to 2014.

Koppell said the two sides aren’t all that different because you’re representing a client either way. The only departure, he said, was that you’re typically in agreement with the public because you believe in what you’re representing. As a private attorney, you’ll fully defend your client but might not necessarily agree with him or her.

“You’re serving a different client, but I don’t see it as being a wrenching departure,” Koppell said. “It’s a little different, because when you represent the public, you usually are sympathetic.”

Buckley’s experience in the real estate finance bureau will end up helping her when she has to represent developers in co-op projects, having already worked on the other side of the table, said Koppell, who served as attorney general from 1994 to 1995 . Whereas she would have to pick a side as a regulator, she can now stay compliant to all the needs of the state while getting the best deal for her client, Koppell added.

“Her posture is not that different,” he said. “In both cases, she’s trying to put the plan through.”

But there’s still the matter of Buckley’s career in that she’s known to most clients as a regulator with the state.

“Whenever you bring in someone new, especially someone who has had a managerial background, they can bring best practices, some protocols,” Moskowitz said. “There’s also some administrative things she’s taken on within our condo group, which is helpful because she’s seen so much from the other side.”

Buckley said one of her objectives in government was to run her bureau as close to a Fortune 500 company as possible. Now that she’s in the private sector, she wants to transfer that skill over and bring it to the next level.

“Now, coming to Strook, I’m getting closer to running a Fortune 500 company,” she said. “I feel like I’m really learning how to run a business, which is really exciting for me because there is a whole new aspect of practicing law that I’m really learning about.”