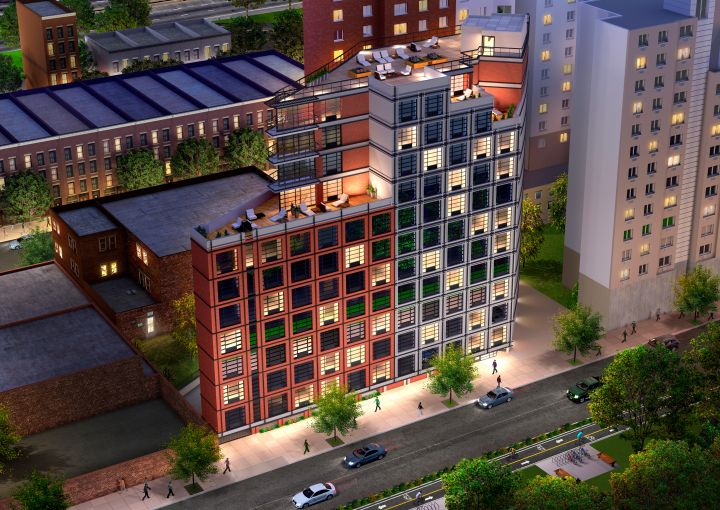 The building will be the first Class A multifamily asset in the Mott Haven section of the Bronx, and will include 91 units, indoor parking, a fitness center and a roof terrace.

“The Mott Haven submarket is an untapped market for luxury rental product such as 329 East 132nd [Street],” said Jonathan Schwartz, a senior vice president at JLL who led the transaction with Adam Schwartz and Doug Baillie. “We anticipate construction lending to continue for such high-end product as strong sponsors and investors look to fulfill heavy demand in a borough that has less than 3 percent vacancy.”

The transaction was First Niagara Bank’s first with the Altmark Group and JCAL. “This financing provided the Bank with an opportunity to participate in the ongoing revitalization of the area that is well in evidence,” Tracy Dembicer, a first vice president in First Niagara’s commercial real estate group, told CO . “There has been notable previous investment in the Mott Haven submarket and continuing interest in redevelopments and repurposing of space that have brought a new vitality to this enclave. We’re happy to be a part of the community that meets the growing demand for living environments in the New York Metro area.  We are particularly pleased to work with developers that already have a strong track record and a deep knowledge of the Bronx submarket. The project’s location— with its proximity to Manhattan and the other boroughs, its central location within the Mott Haven Port Morris Waterfront plan and the nearby Randall’s Island Connector are attractive features that enhance the project’s appeal.”

It isn’t the Altmark Group’s first foray into Mott Haven—the Bronx-based developer has been an investor in the area since the late 1960s. “We are excited to develop one of the first large-scale, market-rate residential developments on the South Bronx waterfront,” said Adi Altmark, a partner at the Altmark Group. “With the impending shutdown of the L train in Brooklyn and continued price appreciation of rental apartments across Brooklyn, Queens, and Manhattan, we are poised to deliver a high-end product for residents at 329 East 132nd Street.”

Altmark continued, “We are pleased that our partners at First Niagara Bank and JCAL Development believe in this market as much as we do, and we look forward to working with them and other partners in the future as we continue to develop the balance of our portfolio.”