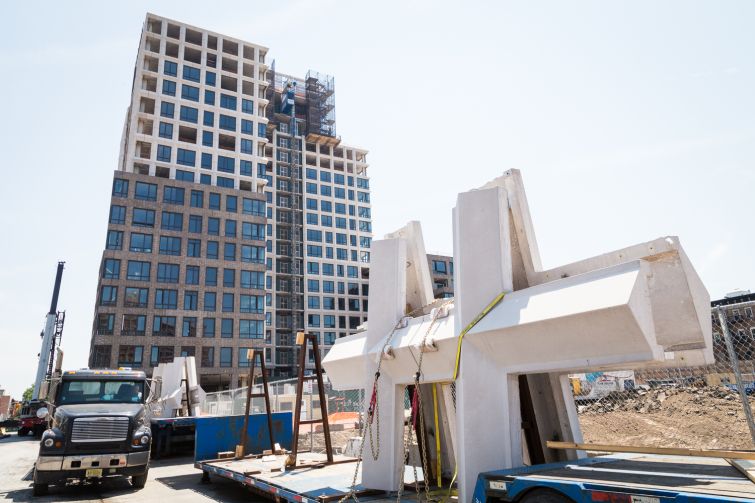 At the intersection of Vanderbilt Avenue and Dean Street in between the Clinton Hill and Prospect Heights neighborhoods of Brooklyn, construction work has topped off at a 331,000-square-foot condominium tower, 550 Vanderbilt Avenue—yet another facet of Forest City Ratner Companies and Greenland USA’s $4.9 billion, 22-acre Pacific Park master plan. Once completed, Pacific Park will contain a total of 6,400 residential units, 2,250 of which are affordable (1,800 units are currently underway, 782 of which are affordable).

Rick Cook and Bob Fox’s COOKFOX Architects is designing the residences at 550 Vanderbilt, which is slated for completion by the end of the year and will house 278 studios and one-, two-, three- and four-bedroom condo units. Façade work is currently underway, and the cast concrete exterior and custom-fired brick is being installed. The Manhattan-based firm is also designing 535 Carlton Avenue, a neighboring 18-story, 298-unit, 100 percent affordable tower.

“In many ways, these two sites were the most important sites of Pacific Park, in that we had the obligation to make the scale transition into the neighborhood,” said Cook, referring to 550 Vanderbilt and 535 Carlton as the mega-development’s “bookends.”

Upon receiving the assignment, Cook studied the surrounding architecture and aesthetic to inspire how he and his team would position the buildings and determine building heights and what materials and colors would be used, explained Susi Yu, the executive vice president of development at Forest City.

When it came to the exterior of 550 Vanderbilt, Cook was influenced by the largest building in the neighborhood, the Co-Cathedral of St. Joseph. The brick currently being laid out at 550 Vanderbilt was customized to mimic the texture and gradation of lights-to-dark in the exterior of the adjacent church.

While the building will have a 24-hour doorman, there will also be some elements of brownstone living, Yu said. There will be three maisonettes, units with private entryways, so occupants can enjoy “the benefits of living in a full-service building, yet having the privacy of coming through your own entry.”

Additionally, Cook’s emphasis on green space has been at the heart of the property’s design, Yu said.

With 550 Vanderbilt in particular, the building “is very sensitive in terms of its design to go from larger, taller building along Atlantic Avenue, because it’s denser along the major arteries, and then a much smaller scale as it comes down on Prospect Heights, and all of the brownstone neighborhoods,” she said. The condo tower is designed with multiple setbacks, providing some residents with private decks, as well as one large common outdoor space on the eighth floor, which will have planters and a catering kitchen.

“People joke that we’ve never met a roof that we didn’t want to plant,” Cook said. “Having the planted green roofs, the ability for people to have gardens, is in some ways a mental health component of living in a dense, urban environment.”

But it doesn’t end with the outdoor deck. The greenery actually starts at the entrance of the building. Residents will be greeted by a reflecting pool in the entryway courtyard, and eight-foot tall windows will allow a direct view through the Jerusalem white limestone floored lobby to Pacific Park itself.

Additionally, 550 Vanderbilt is expected to receive a LEED Silver designation, and Cook wanted to ensure that indoor environmental quality was not overlooked, so all of the wood being used is FSC [Forest Stewardship Council]-certified and other materials will be formaldehyde-free.

“It can be a background of whatever you want your house to be,” Yu said. “It’s not about über-wealth. That’s just not what Rick is about.”