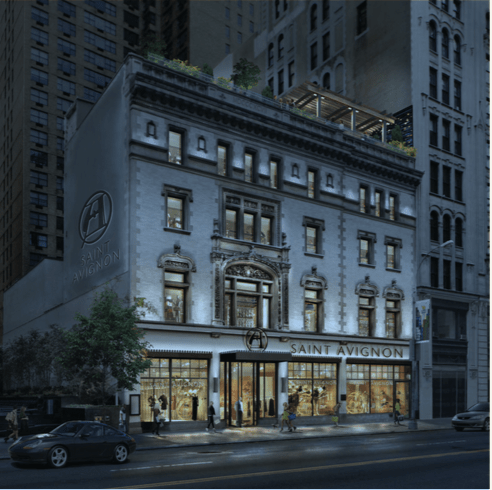 A rendering of an upgraded 218-222 West 57th Street (Rendering: marketing material by GGP and Thor). tcullen2015

The partners shelled out $81.5 million for the property between Seventh and Eighth Avenues, the source said. Lee’s Art Shop, run by the Steinberg family—also the seller—was the longtime occupant of the four-story property before closing this spring as part of the transaction.

Now that the ink is dry on the sale, Thor and GGP plan on marketing the building for a high-end retailer to lease the entire structure, the source said, a la the Polo Ralph Lauren store at the Rhinelander Mansion at 867 Madison Avenue on the Upper East Side.

Amit Doshi and Lynda Blumberg of Besen & Associates represented both sides of the deal.

It was not immediately clear what the asking rents will be for those spaces.

A Thor spokesman declined to comment. A GGP spokeswoman did not immediately return a request for comment.

The Real Deal reported in early May that Thor and GGP were set to close the deal by the end of June. The source said earlier reports that the building had development rights that could be sold to adjacent properties were incorrect. Air rights above the property were sold off prior to the sale, the source said, without providing further detail.

Developers have been scooping up unusable development rights from adjacent properties left and right on West 57th Street, otherwise knowns as Billionaire’s Row. The building sits across the street from Extell Development Company’s Central Park Tower, which is slated to be the tallest residential building in the Western Hemisphere. Nordstrom will anchor the posh skyscraper with its first New York City store.

Although the sale went into contract in 2014, it’s been halted by legal action from another potential suitor. Safka Holdings, which made a bid for the 1897 building in 2013 for $65 million, sued Thor and GGP in April 2015 over the transaction. The jilted buyer alleged in New York Supreme Court that it approached GGP about coming in as a partner on the building, but the Chicago-based real estate investment trust backed out saying the price was too high, as TRD reported last year. GGP then bid with Thor to buy the property for $85 million. Thor was later dropped as a defendant in the case, according to court documents.

Safka Holdings’ attorney, Alan Lebensfeld, didn’t comment on today’s sale, but noted that his client was still seeking damages from GGP. He declined to provide how much in damages Safka Holdings sought.

“Our actions right now are in [seeking] damages,” he said. “There’s no finite number.”

GGP’s attorney did not immediately comment on the litigation.

Safka Holdings also filed legal action against the seller, because the family declined to give him an extension on paying the $5 million downpayment. Safka Holdings lost that case, but Lebensfeld said the case is being brought to the state’s appellate division and will be heard this September.

Update: This story was edited to include the brokers involved in the deal.