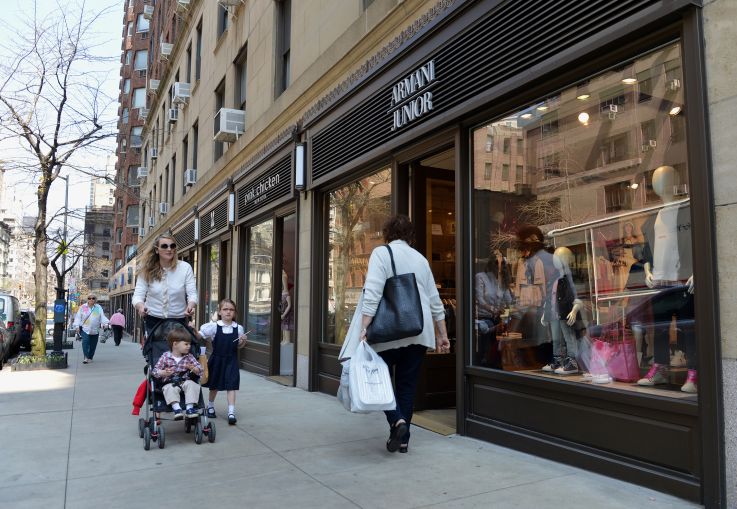 When the weather turns nice and the asking rents balloon to more than $1,000 per square foot on the ground floor of a building, a lot of retailers are saying the words landlords dread: Thanks, but no thanks.

The helium in the real estate bubble is starting to leak with dramatically falling rent numbers in areas once considered extremely safe such as Soho and Midtown South. Asking rents along Broadway between Houston and Broome Streets in Soho for ground-floor retail spaces have dropped 16 percent to $824 per square foot in spring 2016 from $977 at the same time a year earlier. The numbers on West 34th Street didn’t fare much better, falling 11 percent to $890 per square foot from $1,000 per square foot, according to the Real Estate Board of New York’s spring 2016 retail report.

As our sources put it, a landlord wants $1,000 per square foot because that’s what his or her neighbor got. But the retail industry is already hurting and spaces are staying vacant for longer. Sooner or later, something’s got to give.

“We’re at an inflection point in the business cycle in respect to retail real estate,” said Richard Hodos, a retail broker with CBRE. “Basically every third store on Broadway [in Soho] is available. It’s that kind of a situation.”

Overall, asking rents will have to drop roughly 30 percent throughout Manhattan for the market to correct itself, Hodos said. But as retail starts to contract in New York City, there are still three pillars where asking rents are still in the quadruple digits per square foot and don’t seem to be moving: The Bow Tie district of Times Square, Fifth Avenue from 49th to 57th Streets and the upper reaches of Madison Avenue from East 57th to East 72nd Streets.

Even there the numbers are on shaky ground, a sign that not even the steadiest of areas are safe. Since last year, the average asking rents in those areas have dropped between 2 percent and 8 percent. Although that equals between a startling decreases of $50 to $300 per square foot, some retail experts say losses in these shopping pillars will steady themselves out in the long run.

“Both the Bow Tie and upper Madison [Avenue] appear to be holding firmer ground only because pricing there is more in line with market demand than either Times Square proper or mainline Madison Avenue,” John Brod, a partner with ABS Partners Real Estate, said in an email.

Speculation over softening retail rents have been in the air since at least last year. Between then and now, stores have increasingly felt the strain of their brick-and-mortar operations. During Macy’s first-quarter 2016 earnings call, executives at the Cincinnati-based company discussed poor performance at all stores. While online sales showed positive signs, they said, it was completely offset and then some by the weak storefront sales—especially in hot spots and major cities where international shoppers frequent.

“All of us have been reading the stream of negative news stories about various retailers over the past several weeks,” Karen Hoguet, Macy’s chief financial officer, told analysts during the May 11 call. “Clearly, our industry is in something of a rough patch. We know we are not alone, but the consumer seems to be doing okay.”

Things have been worse for the smaller scale retailers—in some cases fatal. Scoop NYC, the 20-year-old retailer that sold boutique clothing lines, began closing stores last month after opening in hot retail neighborhoods throughout the Big Apple in the last few years, as CO previously reported. In that case, many experts said it wasn’t a sign of a poor brick-and-mortar performance but rather a company problem because it couldn’t develop its own identity or brands.

The first Scoop casualty was at the 475 Broadway location between Grand and Broome Streets in Soho, which closed in May. The rest of the New York City shops—in the Meatpacking District, on Third Avenue on the Upper East Side and at Brookfield Place in the Financial District—are being liquidated and phased out.

Retail might not just be softening because the rent is too damned high, however. The larger problem is that stores have not excited many consumers with recent product lines, said Joanne Podell, a retail broker with Cushman & Wakefield.

But even in a downturn there are still pockets of the city that command high asking rents because they are simply located where they are. These addresses aren’t simply a place to shop—they’re a form of advertising: a Times Square or Fifth Avenue billboard, where you can also buy the products.

Although the numbers might be down from the same time a year ago, these are nowhere near the dips you see in Soho and are still going strong in terms of tenant types and the economics of a deal.

When it comes to the Bow Tie—West 42nd to West 47th between Seventh Avenue and Broadway—average asking rent for ground-floor retail was $2,363 per square foot, according to the REBNY report, making it the second highest in the city behind Fifth Avenue. That’s also a far cry from 10 years ago when Times Square was still shedding its rough-and-tumble image of the 1980s and 1990s. A spring 2006 REBNY report found that asking rents in the same area averaged at $427 per square foot—an 82 percent gap from prices a decade later.

“A lot of it has to do with having been cleaned up significantly,” Podell said. “The various [mayoral] administrations, certainly starting with [Rudolph] Giuliani [in 1994], have changed the feeling of the neighborhood.”

The economics of these high rents work, she added, because a Times Square store in the Bow Tie could be open upward of 12 hours a day, leading to more foot traffic and sales.

Moving east, Fifth Avenue has long been a bastion for strong retail, particularly north of Rockefeller Center, with eye-popping rates that cast a shadow over the rest of the city. Retail spaces north of 49th Street all the way up to Central Park have an average asking rent of $3,398 per square foot, according to REBNY’s April report. And big-name retailers tend to take notice, since that piece of Fifth Avenue is home to posh Italian retailers including Gucci, Versace and Bulgari.

Brod, a longtime retail broker, agreed that Fifth Avenue hasn’t been as strong along the eight blocks between Rock Center and Central Park. But because the thoroughfare is home to such highly capitalized tenants, it will remain a mainstay even at lower points in the real estate cycle.

“Retail north of Rock Center on Fifth is not as strong,” Brod said. “But—given the fact that [landlords] have high-profile, well-capitalized retailers along this strip—the staying power is stronger even in a [downturn].”

Indeed, prices might not go up to astronomical levels with each square foot costing as much as an Hermès bag or a pair of Louboutin shoes. But they’ll remain on relatively solid footing because of Fifth Avenue’s panache, Hodos said.

“There’s availability, but there’s only one stretch of Fifth Avenue in the world like that, so I’m not worried about those rents,” he said. “They may not be $5,000 a square foot, but they will be $3,000 a square foot.”

Although being within the ballpark of $5,000 per square foot is not so inconceivable. At the Crown Building, at 730 Fifth Avenue at West 57th Street, Italian men’s clothing company Ermenegildo Zegna had an asking rent of $4,000 per square foot, as The New York Post reported in March. And Bulgari signed in the same building at an even more unfathomable $5,500 per square foot.

Having a Madison Avenue address for just about anything from an office to a residence is still extremely desirable. That’s certainly true for retail, especially between East 57th and East 72nd Streets, which has the third-highest asking rents at the city for ground-floor space—averaging $1,644 per square foot, according to REBNY.

The northern reaches of Madison—something of a fancy open-air strip mall for the elite of the Upper East Side—is home to a year-old Apple store, Giorgio Armani and Chanel. Fashion designer Stella McCartney signed a 5,400-square-foot sublease at 929 Madison Avenue between East 73rd and East 74th Streets in May for a second New York City store (the other is in Soho), as CO reported.

The only Madison Avenue area that might be suffering is between East 57th and East 62nd Streets, Hodos said, citing a string of availabilities. Podell added that the luxury market along Madison Avenue has been softening some but should level itself out in the near future.

“The problem is the stores are relatively small and the rents are very high,” Podell said. “You can’t go to a middle-range product.”

Looking forward, retail brokers said the companies with strong products and shopping experiences would be the real survivors, regardless of the location.

“It’s all about the product,” Hodos said. “If you don’t have product people want to buy, you could be right in the middle of Fifth Avenue, and no one will take it.”