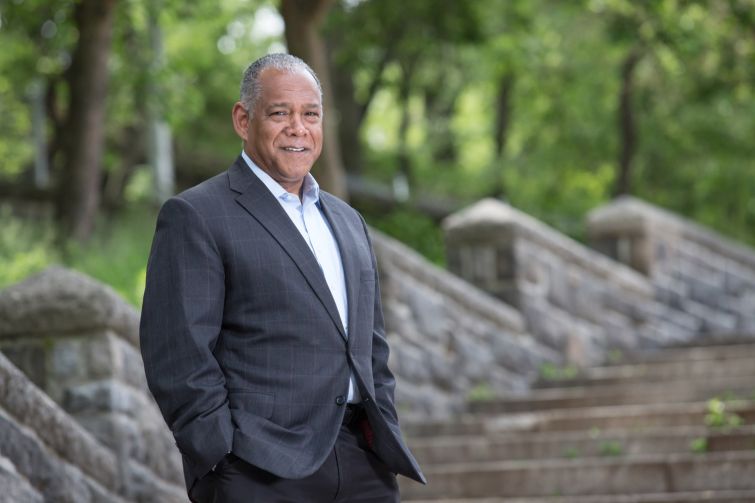 Growing up in Flatbush, Brooklyn, Mitchell Silver had Prospect Park as his backyard. Two years ago, after a stint as the chief planning and development officer for the city of Raleigh, N.C., he decided it was time to come home and oversee that park—along with the other 1,700 parks in the Big Apple—as commissioner of the New York City Department of Parks and Recreation.

Mr. Silver, 55, caught up with Commercial Observer this week to discuss how Gotham’s parks have gone from areas of low repute to once again serving as refuge for residents and tourists alike. As an indication that parks are now safe again, his office is implementing a program dubbed Parks Without Borders, which will lower fences and spruce up entrances to green spaces so they dovetail with surrounding sidewalks.

The program will be lavishing funds on Faber Pool and Park in Staten Island, two parks in Manhattan (Seward Park on the Lower East Side and Jackie Robinson Park in Harlem); two parks in the Bronx (Van Cortlandt Park with a special focus on the 242nd Street entrance in Kingbridge and Hugh Grant Circle/Virginia Park in Parkchester); Flushing Meadows Corona Park in Queens (focusing on the Henry Hudson Entrance between 54th and 55th Avenues) and two Brooklyn parks (Fort Greene Park and Prospect Park, focusing on the Flatbush Avenue corridor).

The 30-year urban planner’s current office sits right next door to that once occupied by Robert Moses, the longtime New York City power broker who built a chunk of the Big Apple’s parks. Mr. Silver said he has mixed feelings about Moses, citing his ability to create parks for everyday New Yorkers (the problem was how he got there in many cases).

When Mr. Silver returned to New York City two years ago, he wanted to make sure he could see the city. He and his wife, whom he met in college, were deciding between Long Island City and Downtown Brooklyn, settling on the latter where they live today.

What are your thoughts of the state of New York City Parks as compared to past decades?

Back in the 1980s and 1990s when I grew up, the population was declining and there was a lot of neglect in a lot of our large public spaces. People basically avoided parks. They were dangerous places. They weren’t well maintained, and they didn’t get the adequate funding or the neighborhood support to really thrive.

These are our outdoor living rooms, our family rooms and our social spaces. So people take our parks and public spaces very, very seriously. As a result, the investment and the care have changed. We’re seeing lower crime rates in our parks. We’re seeing property values increase. It is basically a difference [of] night and day how the park system is run today and how they [parks] look today.

What do you see New York City parks becoming in, say, the next five years?

Equity is No. 1, and it’s high on both the mayor’s agenda as well as my agenda. That is to make sure that all of our parks throughout New York City have the same level of care and investment because so many neighborhoods are growing and changing.

We’re also breaking up the asphalt and turning these concrete jungles into incredible, vibrant spaces with more landscaping, more trees and more activities for multiple generations. Resiliency is now big on our list. We  recognize in the age of climate change that over 150 miles of parkland is along the coast. We’re looking at not just restoring our parks but building in a way that’s resilient to storm surges and other extreme weather events.

Then, lastly, this whole notion of Parks Without Borders, which is the name of our summit on Tuesday. It rethinks our parks: looking at the boundaries, the edges of how they can better connect into the public domain and the public realm so that the fence heights will be lowered or eliminated and more entrances opened into the park. It improves sight lines to make people feel more connected and to better blend our streets, our sidewalks and our public spaces and parks into a more unified system.

It is. Because parks represent 14 percent of the city’s footprint; streets and sidewalks is another 26 percent. That’s 40 percent of the city that is in the public realm, and we want to make sure as a city we plan as a unified system and not separately. We [need to] rethink our parks and public spaces differently since most people use it to walk, play, work, all of that in the public realm.

Can you tell us about the announcement you’re making this week?

We’re going to make an announcement about Parks Without Borders. [There will be] $40 million [given] to eight parks that will get the Parks Without Borders treatment. We held a competition asking New Yorkers to select the park where they’d like us to transform the entrances, edges or adjacent park spaces. We put out the call for requests and got 6,000 nominations to 690 parks. We selected eight; each one will get roughly $5 million. We [announced] the eight parks at the summit, and then we’ll start design this summer.

What does it mean that 6,000 nominations were submitted for 690 parks?

This is one-third all of our parks, so when people express their concern about this initiative, about removing or lowering fences, this is affirmation that we have a different population than the 1980s and 1990s. It’s showing how much people really care for their parks and how they want to be more accessible, safe and attractive. Even though 690 parks did not get selected, we now have a good database about those parks who do want us to help them in the future. So we’re keeping that list, and when the opportunity comes up for reinvestments, we now know that this park would like to see some Parks Without Borders intervention put in place.

You’ve been parks commissioner for two years now. Is there anything that stands out that you’ve learned about the system over that time?

I had no idea how large and how absolutely attractive and stunning our park system is. I have been to parks that I had never been to before, whether it’s Pelham Bay in the Bronx, Van Cortlandt [Park in the Bronx], going to see Flushing Meadows [Corona Park in Queens] and really getting to know these parks. We get 130 million visits to our parks every year. Not visitors. Visits. So that tells you how important it is to the daily lives of New Yorkers but also to our tourism economy.

I didn’t know that statistic.

I haven’t run numbers, but I can’t imagine any other destination on the planet that receives 130 million visits a year.

Is there anything you’re employing that’s innovative into the New York City system?

We’re doing things behind the scenes on making our park system a lot more efficient. I believe in having proper diagnostics: If I’m a doctor, I want to make sure I have the tools to understand the health of a body. I’m doing the same thing with our park system: How do we have the proper diagnostics to test the health of a park system so I know exactly where to intervene and to start addressing the needs of those parks in some neighborhoods that have been neglected for decades?

What are some of those neighborhoods?

It’s the eastern parts of Brooklyn—East New York, Brownsville—south Bronx, parts of Queens, northern Manhattan and the north shore of Staten Island. It’s all the known neighborhoods that would not surprise anybody. That’s where we’re investing close to $300 million in our equity.

Why didn’t New Yorkers care about these parks?

I don’t think that people realized that parks were a vital part of the city’s infrastructure. Some people just thought that these were nice amenities. But in a city as dense as New York, these open spaces mean so much. This is where people go for social gatherings, where they go to get healthy, where they go just to get away from the stress and hustle and bustle of New York.

How did you get into urban planning?

I have an undergraduate degree in architecture from Pratt Institute. But as a young child, believe it or not, it was the World’s Fair [at Flushing Meadows Corona Park from 1964 to 1965] and seeing the panorama that left an impact on me, and I just started getting to love buildings and cities. When I grew up, I pursued architecture, but I was introduced to planning while I was in college. The fact that you can be part of a profession that helps shape and mold cities, I just fell in love at that moment, and I didn’t turn back. The combination of architecture and the appreciation for cities and places. Now it’s 30 years plus, and absolutely I made the right decision.

What are your thoughts on Robert Moses?

With Robert Moses you get both the good and the bad. There are good things that he actually put in place: a lot of public pools and playgrounds. Children were drowning in the river and dying on our streets. So in that respect he was incredible by putting in all those incredible recreational facilities for New Yorkers to enjoy. The downside is the destruction of neighborhoods to some of the highways, and even some of his projects were a bit destructive. That is basically my take.

My office is right next to his former office. But I now prefer to take those asphalt playgrounds and make them a lot more softer and gentle and not just have an asphalt yard around a high fence.

When I talked about looking at the sidewalks as part of the park, it was Frederick Law Olmsted who said that the sidewalk on the outside of the park should be considered the outer park. Central Park clearly is a masterpiece. Whether the godfather or the grandfather of landscape architecture, he is someone that I look up to and someone who has changed park planning, period. He is the one who just established and elevated the profession to something legitimate.

When you’re not running the park system, what do you do in your downtime?

One, I love to exercise. Either I’m running or walking. No. 2, I love photography, so I am out and about in parks, primarily on weekends. New York, in my opinion, is one of the most photogenic [cities] that I have been to. And I have traveled the world. I love just walking New York City streets and parks and taking some unique pictures. And spending time with my family.

What’s the most photogenic park would you say?

Anything interesting that you’ve been able to capture in a photo?

Well, I was at Hearst Tower at an event. I looked out at Central Park—the sun was setting just at the right time—and I took a picture, which to me was just jaw-dropping. I hadn’t seen the park from that vantage point. But the thing about Central Park is the way Olmsted design it; he wanted you to walk on a path, and then a natural picture just appears before you of a natural landscape. That’s the beauty of Central Park: He actually designed it that way where it was a walking album book where you just walk, and all of a sudden out pops up this beautiful vista of a lake. That’s what makes Central Park very picturesque.