Park Matters: Landlords Are Planting Green Spaces Into Their Projects 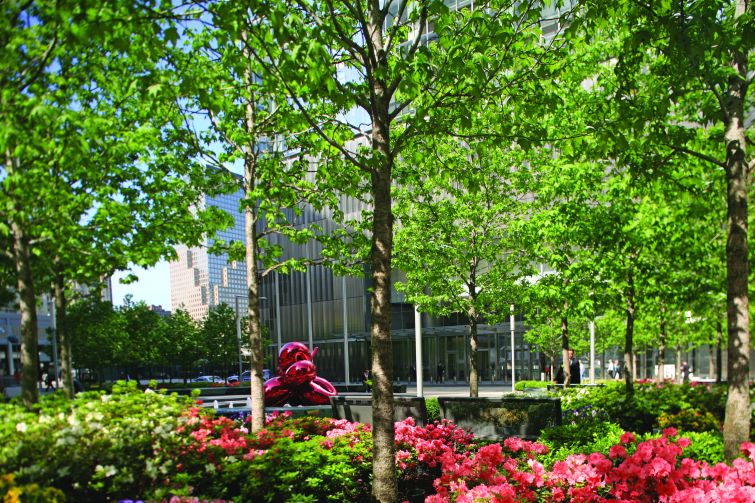 Silverstein Properties opted to build a park across from 7 World Trade Center.

Every landlord likes a piece of property next to a park. But it’s rare that developers take it upon themselves to actually make a park a part of their plans.

But that’s what Silverstein Properties did at 7 World Trade Center after the original trapezoid-shaped building collapsed on 9/11. The original streetscape of the World Trade Center complex was reintroduced, and Silverstein constructed the new David Childs-designed 7 WTC, which opened 10 years ago this week, on parallelogram footprint. The developer was left over with a 15,000-square-foot triangular piece of land bound by Barclay Street to the north, Greenwich Street to the east and West Broadway to the west. Larry Silverstein, the chairman of the company, said if he was 20 years younger he would have built a 40- to 50-story condominium on the site. But at 72, he thought in a different light.

“I decided the best thing to do with that triangular shaped property was to forget about making money on it but instead build a park on it because the park would serve several purposes,” he said. “It would be the front door of the new World Trade Center. It could be a place where our tenants and people living around us could come out and enjoy the park for lunches or just take in the sun.”

It’s also something that’s either a public or private amenity for residential tenants in some properties. Silverstein recently installed a park between the buildings that makes up Silver Towers in Hell’s Kitchen, including playgrounds and a dog run, Mr. Silverstein said.

Rudin Management Company also has employed that practice with a private park at 215 East 68th Street and a public one at 211 East 70th Street, according to William Rudin, the chief executive officer of the company. Zoning regulations required Rudin to develop a new 16,000-square-foot park on Greenwich Lane in the West Village as part of its 200-unit condominium project (also called Greenwich Lane) on the site of the shuttered St. Vincent’s Hospital. The company had to demolish a material handling facility and rehabilitate the existing green space, working with the community on the grand plan. The site also includes a 1,600-square-foot AIDS memorial.

“It’s been a great, great success,” Mr. Rudin said, adding the goal was “creating a community space, where young people and old people and everybody in between can experience a little grass and seating and beautiful plantings and trees.”