One-Stop Shop: Doing Everything From Financing to Construction 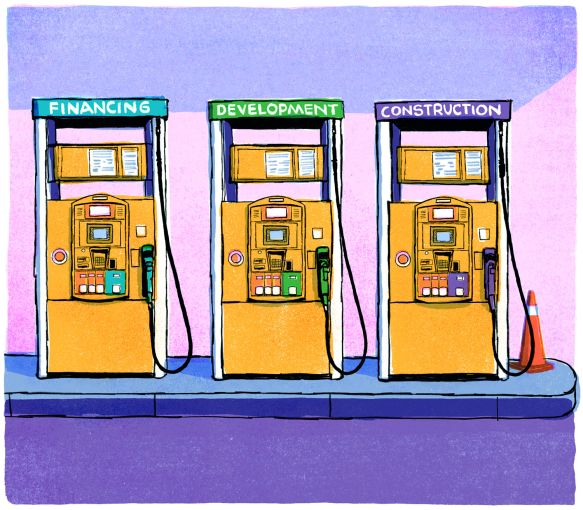 “Having it all” means something different to a real estate audience than it does to the Helen Gurley Brown set. For certain firms, it means combining financing, development and even a construction business under the same umbrella.

“The trend in everything is to bring it all under one roof—just like big markets, like Target and Wal-Mart,” said Sean Barrie, a research analyst at Trepp, a firm that tracks and analyzes the data behind CMBS loans.

Mr. Barrie sees the one-stop commercial real estate shop as part of the trend toward how anything is sold nowadays.

“The aim is to cut off the middleman and bring everything in-house,” Mr. Barrie said. “It ends up lowering the cost of it all. There are no additional fees that an outside firm might end up charging.”

To some firms, being a one-stop shop means being the firm to go to—no matter what a client needs. It means taking on more risk for a chance at greater returns but also presents the challenge of having more parties at the table and the potential for butting heads.

To other firms, it can mean control and not having to use other people’s money—a good fit when holding assets for the long term. But it simultaneously presents the challenge of perhaps knowing too much and the risk of losing a competitive edge in the battle for deals.

To yet another firm, it may mean efficiency and the opportunity to keep clients from looking elsewhere for other services.

“I’m not just this guy, but this guy, this guy and this guy,” said John Livingston, the chief executive officer of AECOM Capital and the former president of Tishman Construction—referencing the many hats his firm wears.

AECOM Capital, the investment arm of engineering firm AECOM,  generally invests $10 million to $30 million in various real estate assets, alongside an operating partner. The firm was founded in 2013 by Mr. Livingston and AECOM, which seeded the first fund with an investment of $200 million.

“Our long-term goal is to be the designer, builder, financier and operator of projects. The term is ‘DBFO,’ ” he said. Sometimes, said Mr. Livingston, the government issues a solicitation for firms like his to take over responsibility for all four functions for building schools, hospitals, courthouses and the like.

One condition of his investing, Mr. Livingston said, is that the project must be built by Tishman, a subsidiary of AECOM. “One example is [the projects we partner on with] Toll Brothers,” he said. “We have projects with them in Jersey City, N.J. and Washington, D.C. Toll is the day-to-day developer; we are the co-developer.”

Investing at the most senior level of the capital stack offers “the chance to make great returns,” said Mr. Livingston. “Here’s a metric. Today we’ve invested, at the co-general partner level, $200 million in 14 projects—$3.5 billion of development. Construction is 60 to 65 percent of the budget. That times $3.5 billion of development means we have created over $2 billion of construction backlog as we build these projects out,” which he said Tishman would not have realized otherwise. “It’s a direct metric. Tishman gets fees as a percentage of the cost of construction.”

Naturally, by providing credit enhancement with its balance sheet, AECOM Capital is taking on more risk.

“The bank can come after you, the guarantor,” Mr. Livingston said, but so far, this strategy has not proved problematic for AECOM Capital. “We’re hands on. The second I become the guarantor I assign people to the project. We come in early, take more risk and get a higher return.”

There is a challenge built in to this business model, in that there’s one more party coming to the dance, said Mr. Livingston. “Other projects have a developer, a limited partner and a lender. There’s one more party involved here. And people don’t always agree, like in any partnership, whether it’s a marriage, or a real estate partner. You’re married for that project.”

Jeremy Shell, the executive vice president of TF Cornerstone, said the concept of the company serving as a one-stop shop—financing, development and construction—really began to take hold at his company when the family-owned company experienced significant growth in the 1970s and 80s (this is when TFC founders, K. Thomas and Frederick Elghanayan, were still part of Rockrose Development before the company split in two in 2009).

“We took more of the work in-house,” he said. “We brought in management and all the functions that many small companies tend to outsource. We’ve been managing our own buildings for decades, and we’ve been our own construction manager for decades.”

As for leasing, Mr. Shell said the company finds it is able to control leasing velocity, have a better sense of the market and have more power over its product when it determines that end of the business. On the finance side, “It made sense to have staff oversee it. It makes economic sense to carry that overhead.”

The words “control” and “long-term” are used frequently when talking about the company’s business strategy.

“We’re unique,” said Mr. Shell. “We hold assets forever. We have a multigenerational investment timeline because we have a long-term perspective.”

Accounting is done in-house, to maintain control over it. There is also a staff dedicated to development and planning.

“Instead of relying on outside architects we have a planner here who helps and manages community outreach, but we go to an outside legal team once a project advances to a certain stage of development,” said Mr. Shell. “We actually have legal staff as well, to handle day-to-day matters on leasing and financing acquisitions.”

At 33 Realty in Chicago, a firm born in 2008 in the wake of the housing crisis, the founders say being a full-service shop helps it weather the ups and downs of the real estate market. “When clients use our services a la carte it does help with the flows of the real estate market,” said Drew Millard, founder. “When residential sales are down, our leasing service and real estate-owned service line pick up.”

Eric Weber, a principal at 33 Realty, said the way he sees it, the one-stop shop is here to stay. “I don’t see this as a passing trend at all,” he said. “Our clients benefit from seeing fewer errors and conflicts because we understand their goals to a much better degree.”

However, Mr. Shell said he doesn’t see a trend toward one-stop shops, despite a firm like TF Cornerstone’s success in figuring it out. “Several firms have similar staffing but the trend is probably [away from this]. We run differently than most development shops, everything from the capital we use and ration to the fact that we hold our assets, those things lend themselves to bringing things in-house.” Most developers, he said, are using other people’s money and bringing a large staff in-house is hard to justify.

It is harder to distribute staff across deals when they are allocated to different partners, Mr. Shell explained, but “we don’t have to consider that because everything is for the same account at the end of the day. It’s the same with construction. We bring people in-house and apply them to projects as needed.”

As for development, Mr. Shell said the industry is probably moving away from the TFC model. “They’re using other people’s money, selling on a shorter time line. It’s harder to maintain sizable staff when a portfolio could be a dozen assets today but different tomorrow. It’s hard to justify the overhead.”

Mr. Shell said he would be hard pressed to quantify savings from being a one-stop shop but said to the degree that this setup allows the company to build projects under budget and ahead of time: “There’s a quantitative benefit from that, as well as from managing our own buildings if it translates into a higher percentage of tenant retention and higher rents.”

TFC’s finance department has been busy recently, said Mr. Shell, trying to take advantage of the low interest rate environment by getting long-term fixed-rate loans for its buildings.  And while rates are low, competition is fierce, and pricing is being pushed through the roof. “That is one of the advantages we have in competing for new deals, construction or acquisition. We have real time pricing of our jobs—when we’re looking at a new deal we just go down the hall to our construction pros to see how the next deal might price,”he said.

However, knowing the different arms of the business keeps them sober. For example, there could be a situation where “we have too much knowledge to be overly optimistic or aggressive,” Mr. Shell said. “In an inflated environment like we are in now it takes a set of blinders to aggressively bid. If we start from one point a competitor may start from a different point because they don’t have the data we do.”

If knowing too much is sometimes a shortcoming in the eyes of Mr. Shell, Mr. Millard of 33 Realty said it takes time to earn clients’ trust in each segment of the business, but once they do, clients are “ready to dip their feet in other parts of our business lines.”

Mr. Millard could not provide figures showing how much being one-stop means to the bottom line but did say the company’s staff has tripled in size as a result.

“It’s the same way you try and grow any business,” said AECOM’s Mr. Livingston. “Ask yourself ,‘What else can you do related to what you do?’ Make more offerings.”