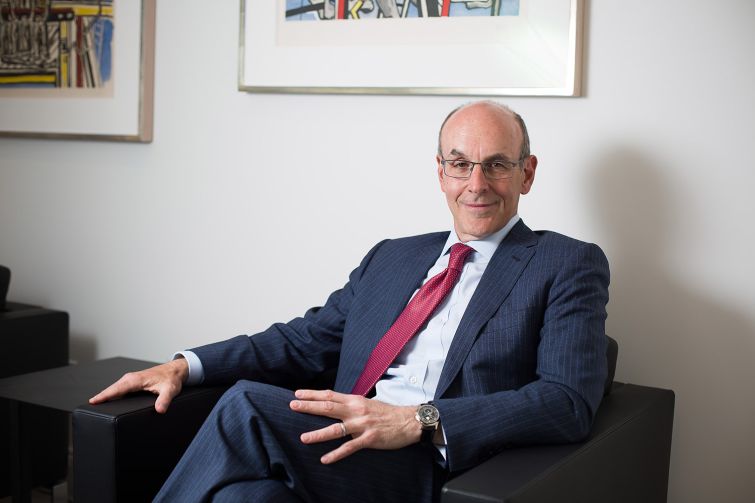 Apartments at 56 Leonard, the cantilevered-60-story, 821-foot structure with a specially commissioned work by sculptor Anish Kapoorare at the base, are being delivered this week. As with any complicated, multiyear condominium project, the developer of the glass Herzog & de Meuron-designed structure in Tribeca had to deal with litigation during construction.

“Some [sub-contractors] went under so we had to deal with their bonding companies,” said Izak Senbahar, the president of the Alexico Group, the development firm behind the project. And the lawyer who handled that matter, and all of the company’s legal issues, was Michael S. Zetlin, a founding partner of Zetlin & De Chiara.

“He specializes in construction law and I think he’s very specialized and knowledgeable in the field,” Mr. Senbahar said. “It makes a lot of things easier to have him on your side.”

Very specialized. The 56-year-old Mr. Zetlin, a graduate civil engineer, litigates and arbitrates multimillion-dollar construction claims throughout the country. In addition, he drafts and negotiates contracts for some of New York’s most complex and prestigious developments on behalf of owners, institutions and developers.

As a firm that specializes in construction law, Zetlin & De Chiara has a unique niche. Mr. Zetlin is unusual as he is armed with a bachelor’s degree in engineering from Columbia and a J.D. from Fordham University.

It’s not surprising that Mr. Zetlin got his undergraduate degree in engineering. His father, Lev Zetlin, was a world-famous structural engineer who served as an expert on structural disasters.

“I grew up watching him and admiring him,” Mr. Zetlin said by telephone last week from the 2016 American Bar Association forum on construction law in Nashville, Tenn. “I was always very strong in math and sciences so it was sort of a natural draw to that field.”

The late-Zetlin employed the help of his son, who was attending Columbia at the time, when the walkway collapsed at the Hyatt Regency Kansas City hotel in Kansas City, Mo., in July 1981. Mr. Zetlin’s father was engaged as an expert consultant by one of the companies that designed or constructed the hotel and asked his son to perform research on standards and practice for the case.

“That was my first introduction to the legal field,” Mr. Zetlin said. “I became intrigued with the legal arena and that’s when I made up my mind to pursue a career in construction law.”

Upon graduation from law school, Mr. Zetlin started at what was then-Whitman & Ransom. After a few years, when the firm failed to get a steady supply of construction-related matters, Mr. Zetlin left for boutique firm, LePatner, Block, Pawa & Rivelis. While there, he worked on a case that went to jury trial for six months. A contractor sued the State of New Jersey and the engineer for $35 million in cost escalation on the excavation of rock for the expansion of Interstate 287. He defended the engineer.

At that point, which was the beginning of 1992, Mr. Zetlin decided to go out on his own, co-founding construction law firm Zetlin & De Chiara with partner Michael De Chiara. Shortly afterward, two other senior partners came on board.

As a construction law firm, Zetlin & De Chiara is singularly focused on contract preparation, litigation associated with construction projects, project labor agreements and some corporate work related to the industry.

The building environment, Mr. Zetlin said, “is fraught with potential pitfalls.” To prevent them, Mr. Zetlin dedicates a significant amount of time to contracts.

“We pride ourselves on seeing what might go wrong before it actually does,” Mr. Zetlin said. “We’re very much dedicated to crafting agreements for clients and also trying to make the project a success, trying to balance different sides to mitigate risks and make it as successful as it can be—on time, on budget and meeting the quality expectations that the owner has.”

Mr. Zetlin’s firm is primarily on the owner, developer side, although the attorneys represent some prominent design firms and construction managers. He personally works on dozens of contracts and litigations each year, including litigations worth tens of millions of dollars. Currently, he has six active cases.

“I tend to focus my time on larger litigations and contracts,” Mr. Zetlin said. Those span many sectors from sports arenas and stadiums to educational institutions to museums to high-rise residential and commercial real estate projects.

Generally there are three types of construction problems: personal injury, property damage and the overall catchall category of economic loss (which includes projects costing more than anticipated, design errors, contractors spending more on particular trades than expected or delays). Economic loss is the most common reason for a claim on a construction project.

Mr. Zetlin’s biggest case to date is a personal injury claim for $600 million in the northeast (he declined to get more specific about the location). Sixty sandhogs—the workers who clear out underground tunnels—said they got caisson disease, or decompression sickness, due to construction problems associated with the tunnels and excavation. Mr. Zetlin represented the engineer and successfully got the case dismissed.

Mr. Zetlin, an adjunct professor at Columbia and co-editor of New York Construction Law, the leading treatise on the subject, lives in Roslyn Heights, Long Island, with his wife, Gerri, a non-practicing attorney. The couple of 29 years has two sons, 26 and 27, and a daughter, 21.

“He’s one of the eminent construction lawyers in New York City and he’s also very active guy on the professional scene,” said Richard Anderson, the outgoing president of the Building Congress. “He brings to the Building Congress a wealth of experience and a generous support. So he’s well respected, well regarded and had been on the board previously. When our previous general counsel retired, he was the logical choice.”

Mr. Zetlin’s work for the Building Congress has been all pro bono. He monitors the bylaws and reviews any changes made to them; he supervises the annual process of filling out conflict of interest forms; he and his staff ensure the personnel manual is up to date; and he reviewed Mr. Anderson’s employment agreement, “which is particularly important now because were in a five-year transition period to a new president at the end of the year,” Mr. Anderson said.

For AIA New York, Mr. Zetlin has provided advice over the years. He gave a helpful talk at the first board meeting of the year about board governance, said Carol Loewenson, a partner at Mitchell/Giurgola Architects and the 2016 AIA New York president.