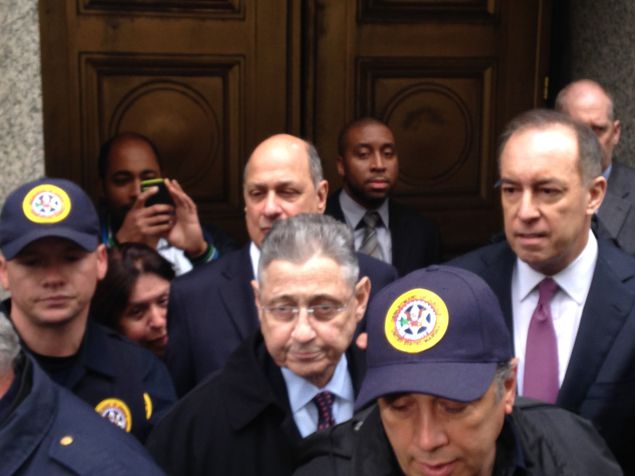 Sheldon Silver with his attorneys (Photo: Will Bredderman/ for Observer).

In the Thurgood Marshall Federal Courthouse today, federal prosecutors’ called for Silver to serve the longest prison sentence ever given to a New York elected official found guilty of corruption—exceeding former Assemblyman William Boyland’s 14 years. Silver’s attorney’s, alluding to letters from colleagues and constituents detailing their experiences of his assistance and dedication, and to the defendant’s 72 years of age and recent brush with prostate cancer, requested mere house arrest and community service.

Ms. Caproni acknowledged the former speaker’s skills as a politician—but argued Silver’s pattern of behavior revealed his character to be lacking, and that he must become an example to other powerful officials considering taking part in corrupt activity. The jurist noted that Silver not only used the subtle subterfuge of referral fees from two law firms to take kickbacks from a state-funded mesothelioma research center and a developer seeking tax breaks and subsidies in Albany, but also repeatedly sought to conceal his activities.

To continue reading the story on Observer click here.