Aaron Malinsky Has Been Knocked Down, But Gets Up Again 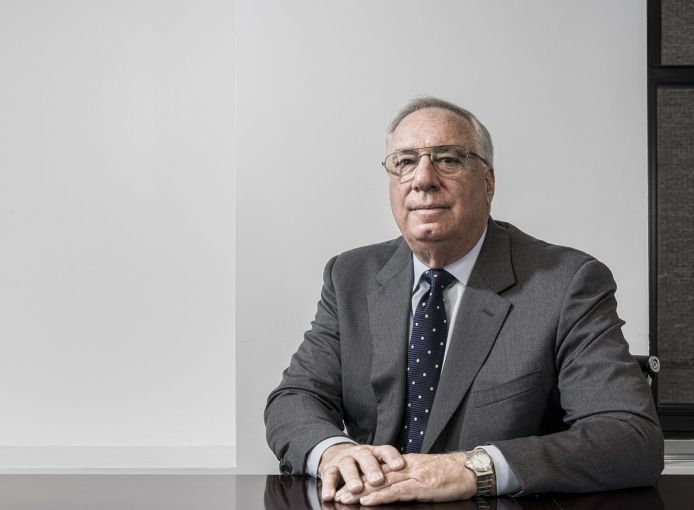 While there are many potential paths to a career in real estate, Aaron Malinsky, the president and CEO of Curbcut Urban Partners, took an unlikely one, falling into his lifelong passion thanks to wrestling.

Mr. Malinsky, 67, needed to take a class in a “functional topic,” such as shop or auto mechanics, at his high school in Valley Stream, Long Island. He chose drafting because the teacher had been a star wrestler at Syracuse University.

That high school drafting class revealed some unrealized talents. “What I learned in that year was to be able to visualize items—whether it be buildings or a telephone—and to understand the perspective,” Mr. Malinsky told Commercial Observer at his publicist’s office in Midtown.

“That year of training has always helped in understanding what our image or our vision of a project would look like. It helped me when I was in the supermarket business and then in the real estate business.”

In a career spanning over 40 years, Mr. Malinsky has developed over 100 shopping centers in the New York metropolitan area. He has worked on over 21 million square feet of retail space, over 4.75 million square feet of industrial distribution space and over 300,000 square feet of office space. He opened Curbcut—which he runs with his children, Carolyn and Benjamin, both vice presidents at the company—to focus on projects in underserved areas of the outer boroughs in 2012.

“Aaron is one of the brightest, most hardworking and experienced individuals I’ve worked with,” said Joe Simone, the president of Simone Development, who worked on a 285,000-square-foot shopping center at Throggs Neck in the Bronx with Mr. Malinsky. “In the world of development, sometimes you have to go through 10 to 20 projects until you’re able to consummate one, and there’s a lot of due diligence on these, a lot of moving parts. Aaron is able to very well navigate through the process from inception through completion. He’s highly experienced, highly dependable, highly trustworthy, and you couldn’t ask for more in a partner or co-worker.”

From early on, Mr. Malinsky, who was born in Brownsville, Brooklyn, and raised in Valley Stream, anticipated a career related to building.

“In the 60s, cities were being highlighted with all sorts of social and economic dynamics, and it became very appealing to me,” Mr. Malinsky said.

Part of his passion for location emerged from two opportunities to traverse the city. As a child, he would travel around New York with his father, a furrier, collecting people’s fur coats to store them for the summer. 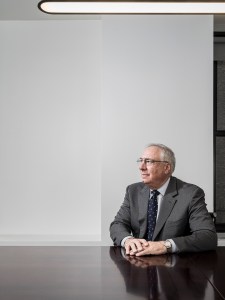 Later, while studying for an urban planning degree at NYU, he worked part time for a planning consulting firm and spent two years selecting locations for trees throughout the city.

“I would do the research on every block,” he said. “I had to walk with a spray can and put an X for, ‘This is the spot you can put a tree.’ All the street trees on Madison Avenue, for example, are mine. I go all over the city and show my children and grandchildren, ‘I planted that baby.’ ”

In 1970, he graduated from NYU and married his college sweetheart, Randie, whose father, Ira Waldbaum, owned the Waldbaum’s supermarket chain. After several years spent doing various tasks for an investment builder, Mr. Malinsky went to work for his father-in-law as the chain’s director of real estate. This gave him entry into the business and real estate ends of the supermarket and shopping center industries.

“I worked all over metropolitan New York,” Mr. Malinsky said. “I learned all the developers, all the lenders, the legal business. We went out and found locations and expanded our company very significantly.”

Mr. Malinsky spared no effort in learning the business, or in determining proper locations for the chain’s stores.

“Before there was all the technology and demographics we have today, we used to go to neighborhoods to find out what the competitive situation was when people were shopping,” Mr. Malinsky said. “We went on garbage day and opened up the garbage pails to see where the groceries came from. You can’t beat that research. That’s how we knew where they shopped.”

Mr. Malinsky rose to become executive vice president, and when his father-in-law sold the chain to A&P, he was named president of Waldbaum’s. He was later promoted to vice chairman but left a few years later when he became dissatisfied with the company’s direction. (Mr. Malinsky had briefly left once before to purchase the Victory Markets supermarket chain, a failed effort that faced competition from Wal-Mart and, he admits, mistakes from his own team. He returned to A&P before leaving for good in the early 1990s.)

By the late 1990s, Mr. Malinsky decided to head into real estate for good, hoping to build suburban-style shopping centers inside the outer boroughs.

His first was the 235,000-square-foot River Plaza in the Riverdale section of the Bronx. Completed in July 2004, the Plaza is anchored by what Mr. Malinsky said has become “one of Target’s best stores in America.”

After that, he formed a company called PA Associates (in partnership with Paul Slayton), and they, in turn, partnered with Acadia Realty Trust, a pairing that would lead to “about 10 or 11” projects over the next decade.

For Mr. Malinsky, real estate is not just a business but “the ultimate creative enterprise.”

“It’s physical—you touch it, you feel it, you see it. If done right, it could be pretty,” he said. “It’s also vitality. People live, work, eat and sleep there. So it’s a living enterprise, and it changes over time.”

This passion for the business especially emerges when he discusses his projects.

“I have a special fondness for Fordham Place because we were early in recognizing the future of the Bronx,” he said of the mixed-use retail and office complex that was the first such new project in the borough in 15 years. “We took the old Sears building directly across from Fordham University, and we made a mixed-use building out of it with a variety of vertical retailers. We were on top of Metro North, so we had the train there, and then we built a community services building that included an intermediate school.”

This passion not only guides him but makes him a valuable collaborator.

“He’s been my dream partner,” said Alex Weiss of Laundry Capital, who’s working with Mr. Malinsky on a new project in Queens called the QB38 Tower. “Because he’s one of the most capable real estate developers, he knows every inch of the boroughs. He’s meticulous, super thoughtful and has a lot of integrity. He’s a really good guy to work with, a complete pleasure.”

Mr. Malinsky was working on several exciting projects in 2011, including Brooklyn’s 1.8 million square foot City Point, when his business—and life in general—were derailed when he was accused of paying $472,000 in bribes to State Senator Carl Kruger in exchange for Kruger’s advocacy on his developments. He was indicted in March of that year.

Mr. Malinsky closed his office and backed away from several projects, including City Point (partner Acadia asked him to step aside, and he obliged) and a shopping center at the Brooklyn Navy Yard. (Throughout this time, he continued work on the 285,000-square-foot Throggs Neck Shopping Center in the Bronx.)

“I made a decision that I was not going to be an obstacle to any of these projects moving forward,” he said. “I worked out the equitable removal of me from the projects, and I put all my energy into proving my innocence.”

After nine hellish months, including a comprehensive investigation by prosecutors, the charges were dropped.

“Anytime something like this happens, you need three elements,” he said. “First, you need to keep your wits. I went on a diet, went to the gym every day and no drinking. I made sure I was physically healthy and got a good night’s sleep every night. Then, I had the financial resources to defend myself. [Finally] I had emotional resources from family and friends who stood by me. If you have only two out of those three, you’re in trouble.”

One person who stood by him was Mr. Simone, who was working with Mr. Malinsky on the Throggs Neck project and others, and continued working with him throughout his legal ordeal.

“I only know Aaron’s hardworking, honorable and honest side. I’ve never experienced anything other. I had no reason to believe any of [the speculation],” he said.

Once cleared, Mr. Malinsky did his best to put a positive spin on things and move forward.

“It was an emotional burden to my family,” he said. “You work your whole life building a reputation, and a thing like this happens. But it happened. I’m grateful it’s over—I’ve been exonerated. I put my head down, and I began a new life.”

After an extended vacation with his wife, he announced the formation of Curbcut.

Shortly after, with exciting projects on the horizon, Mr. Malinsky was dealt an even harsher blow when Randie was diagnosed with stage four lung cancer. She passed away 18 months later, in 2014.

“That was devastating. It came out of nowhere,” he said. “She was diagnosed with nonsmoking lung cancer. It’s a worldwide epidemic for women in their 60s because women get mammograms, and men get chest X-rays. If you had a normal chest X-ray every year for a woman and they had nonsmoking lung cancer, they’d see it fast. Unfortunately, they don’t catch it until it’s stage four.”

On the business side, Curbcut has allowed Mr. Malinsky to stage a successful return. He is upfront about his legal misfortune with new potential partners and says it has failed to become an obstacle almost every time.

“When we announced the formation of Curbcut, I started working on projects as if nothing had happened,” he said. “The difference is, whenever I had a meeting, I began by telling my story. And what I basically said was, ‘This happened to me. I can’t change it. I’m exonerated with no conditions whatsoever. If this causes a problem for you to do business with me, I understand. That only happened once.’ Truth is a funny thing. It works.”

Mr. Malinsky’s latest project is the QB38 Tower, a nine-story, 146,000 square-foot mixed-use office, retail and community facility property on Queens Boulevard and 38th Street. The project, just one block from the 7 train, is designed to host medical, community-based and nonprofit tenants. Mr. Malinsky hopes to begin construction in the first quarter of 2017 and deliver by the second or third quarter of 2018.

“No one is focused on the importance of community facilities’ facilities, and we wanted to create that niche,” he said.

Mr. Malinsky, who returned to work with City Point after he was exonerated, has two other local projects coming up that he can’t discuss yet and is also developing a retail complex around the Aon Building in Chicago.

In the years ahead, Malinsky looks forward to continuing along and furthering his passion—building shopping centers where everyday families can shop.

“The boroughs of New York are understored,” he said. “The core of my retail business is your classic stores: the food store, the clothing store, the local restaurant. I’m really looking at middle-class customers and down who still like shopping. I want to be the guy that’s building to that constituent. I want to be family friendly.”