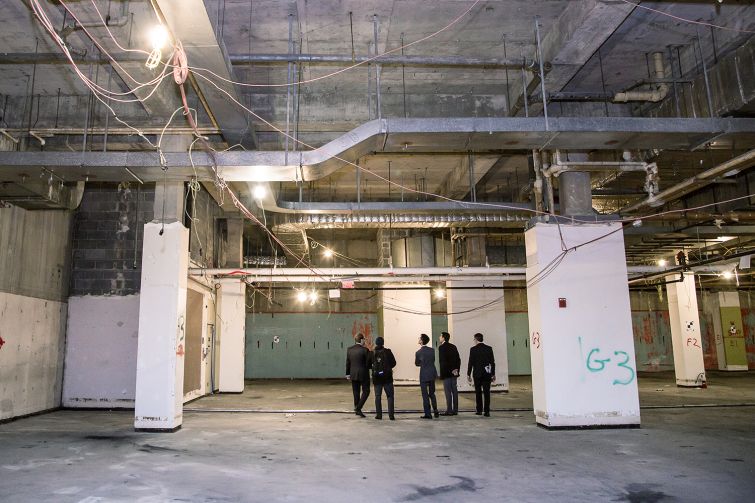 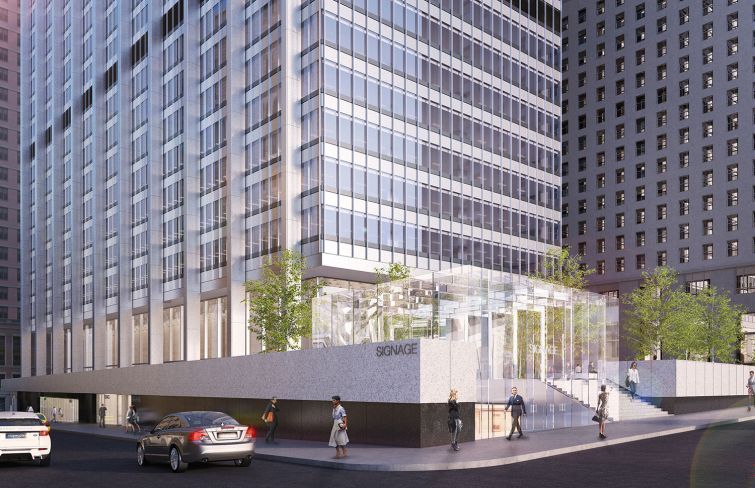 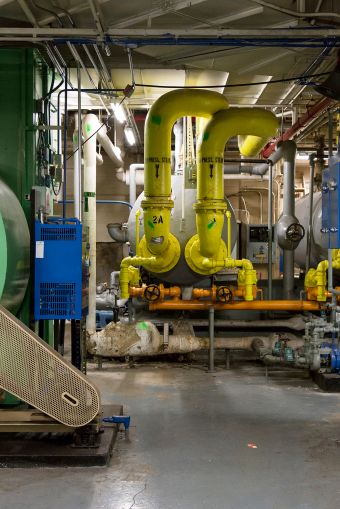 The HVAC equipment that Fosun needs to remove for the glassy elevator shaft at the corner of Liberty and Nassau Streets (Photo: Kaitlyn Flannagan/ For Observer). Liam La Guerre 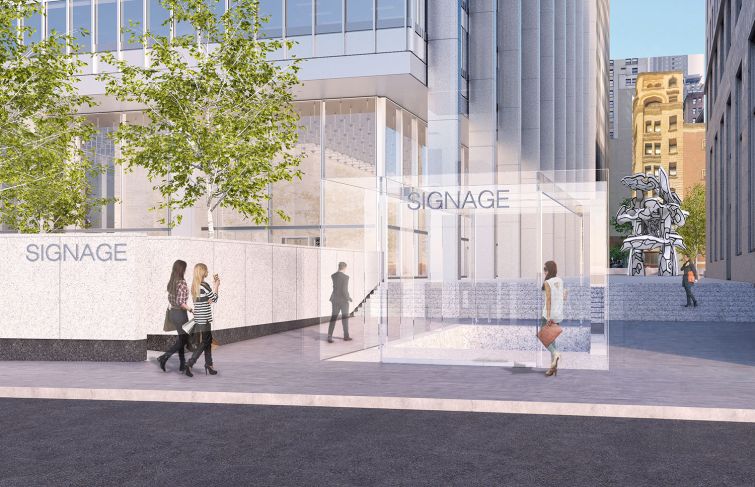 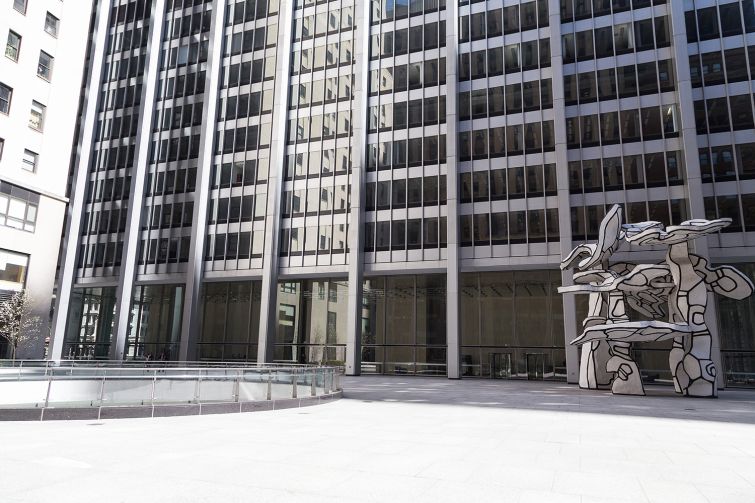 The plaza in front of the building formerly known as One Chase Manhattan Plaza (Photo: Kaitlyn Flannagan/ For Observer). Liam La Guerre 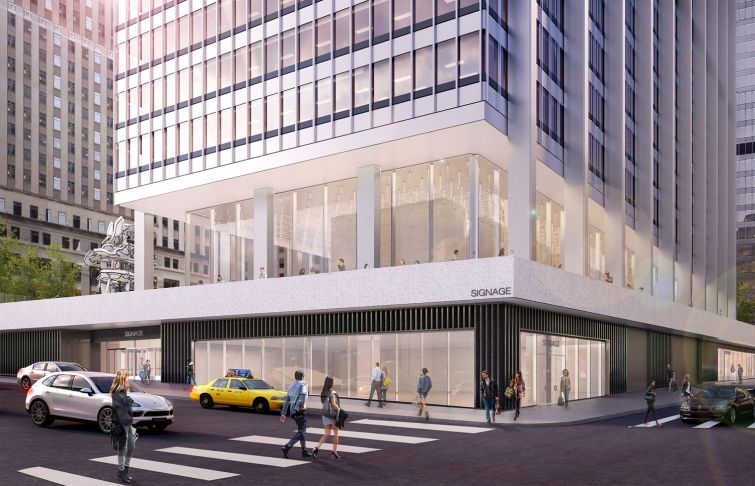 The ground floor of the building will be renovated for retail as well (Rendering: Fosun Property Holdings). Liam La Guerre 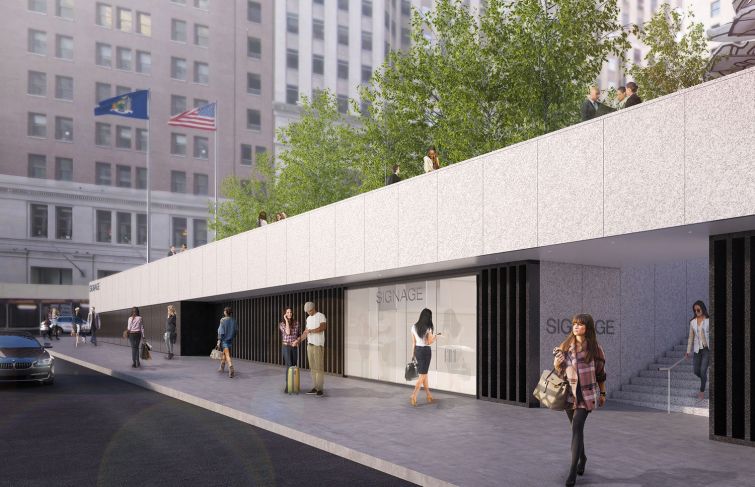 Like many people who have owned property for half a century, J.P. Morgan Chase really avoided cleaning up its basement at 28 Liberty Street.

So when a new landlord—Fosun Property Holdings, which purchased the building formerly known as One Chase Manhattan Plaza for $725 million in 2013—stepped in, it was one of the first things they wanted to resolve.

Fosun is finding out all about the cluttered basement thanks to a complex renovation project to convert the ground floor and three sublevels into a multilayered, 200,000-square-foot retail concourse.

Since erecting the 60-story tower between Nassau and William Streets in 1964, J.P. Morgan used its subfloors for storage—including its art collection—wiring, mechanical systems, data centers and HVAC systems. There was also a cafeteria, mailrooms and janitorial and building management staff rooms. But over the decades the air ducts and wiring for mechanical systems on the third floor down were an utter mess.

“The thing about an owner occupying their own building is that there aren’t building standards you have to meet for labeling cables, wiring [and] plumbing,” Jason Berkeley, a vice president at Fosun, told Commercial Observer during a recent tour of the construction site. “You can just run it wherever you want if you own the building, so when we pulled the ceiling down there was literally 50 years worth of people running stuff everywhere. The ceilings here have almost been like peeling the layers back of an onion.”

Fosun, which received Landmark Preservation Department approvals for the project last year, has already pulled out dividing walls to open up the floors and tore up the drop ceilings to reveal the chaos they have to rectify. The next step will involve its engineers figuring out what they can discard and what they need to keep. And columns on the floors will be stripped of utility lines that were boxed in with them, effectively reducing their widths by more than a half.

Fosun plans to build glassy, boxed entrances to the retail center from the elevated 2.6-acre plaza that leads to the retail concourse below in a similar fashion to Apple’s store near Central Park. The main transparent entrance will be at the intersection of Nassau and Liberty Streets and will have a glassy elevator shaft through the entire 58-foot, four-level retail section (ground to lower level three). But making that elevator shaft will be tricky for the simple reason that workers will also have to maneuver around the nearby 4 and 5 subway tunnels.

And even before the glassy elevator shaft can happen, workers in the coming weeks have to decommission and relocate parts of the HVAC system that has dozens of pipelines in the coming weeks—all while not interrupting the heating and cooling in the building for office tenants.

“Honestly most of the tenants have no clue how much work has been going on down here, and that’s part of what we want to do—make sure we are not disturbing them,” Mr. Berkeley said.

The cost of the renovation is about $160 million, which also includes upgrades to the 2.2-million-square-foot tower. Demolition began in October 2015, but the scope of the project is so complicated that the landlord doesn’t expect to open the retail center until 2018.

Asking rents for the space range from as high as $400 per square foot on the ground floor to as low as $90 per square foot for the lowest level. Ideally, Fosun wants a single large-scale retailer to take the entire block. But there has also been talk about dividing up the floors for a mix of a gym, an events hall, a cinema and a larger clothing retailer.