The Plan: The Lobby at 1221 Avenue of the Americas 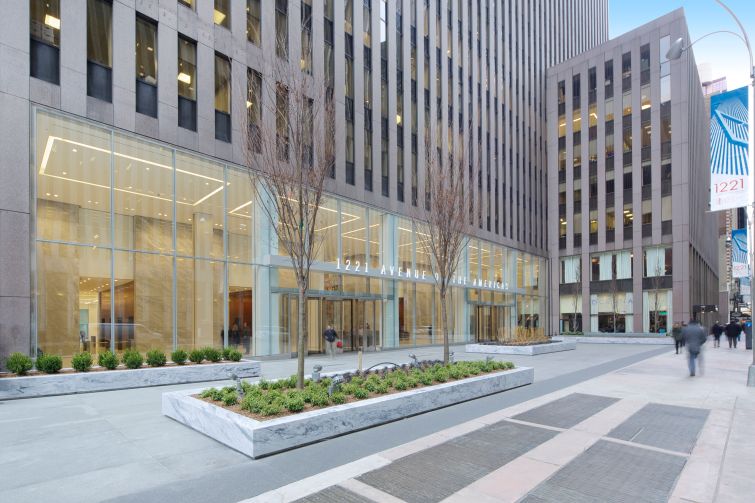 A rendering of the restored exterior of 1221 Avenue of the Americas. danibalbi

Many a time you hear that a building got a brand spanking new lobby and that’s what brought X, Y and Z tenant to the property.

This is hyperbole in plenty of instances, but it’s surely true for Rockefeller Group, which recently completed its entrance at the 44-year-old 1221 Avenue of the Americas between West 48th and West 49th Streets. The landlord started out in the middle of 2014 with renovating the lobby, which cost upward of $30 million, and finished earlier this year. It’s also the first time since the late-1990s that the landlord has overhauled the lobby, according to Edward Guiltinan, the head of leasing for Rockefeller Group, in the first of two phases to spruce up the 2.5-million-square-foot structure.

The lobby has become more open to accommodate the workforce coming to the building, which is home to Sirius XM Radio, NBC Universal and anchor tenant McGraw-Hill Companies. The MdeAS Architects-designed lobby has gone from darker walls and floors to a much brighter white paneling along with imported grey stones.

“We transformed a lobby that had a mix of finishes that needed to be updated that people would walk through in a hurry to get to their office space,” Mr. Guiltinan said. “We changed that into a really bright, modern, aesthetically pleasing lobby with cohesive finishes and impressive artwork. People choose to linger.”

And linger while tenants may, they can also move much more efficiently through the lobby now. Mr. Guiltinan said a streamlined flow through the entrance was crucial in today’s world of office density and getting more people onto a single floor.

Rockefeller Group changed up how you can enter the building by adding a second entrance on West 48th Street in addition to its longstanding West 49th Street doorway. Instead of a single welcome desk in the center of the lobby, there’s one each at the north and south entrances to the lobby. The southern portion of the building had previously been a relatively small entrance to the building, Mr. Guiltinan said.

“We thought it was important to…have a door that was visible from Sixth Avenue on the street level,” he said. “It changed the back door into the building into becoming a prominent entry to the building that many people now use.”

An older retail space was removed from the West 48th Street side of the property to make that new entrance possible. The old “back door” of the building has since been replaced with a new amenity retail spot: Zibetto, an Italian-style espresso bar. Mr. Guiltinan said that the strong coffee brewer was meant to be an amenity for existing tenants, potential new companies looking to move to 1221 Avenue of the Americas and the surrounding Midtown community.

Rockefeller Group also commissioned artist Mark Bradford to paint two murals for the lobby. The murals face each other and stand 22 feet by 22 feet in the center hallway of the lobby.

All of the lobby work is part of the first of two phases to modernize the Nixon-era building. Next is creating a design for the sunken plaza that sits in front of the building along Avenue of the Americas. Mr. Guiltinan said MdeAS Architects has been brought in to work on the preliminary designs of the arcade, and Peter Braus of Lee & Associates NYC has been brought in to market the retail space.

“We know that [the plaza is] an important aspect of completing the renovation of the building,” Mr. Guiltinan said. “The nice thing about that project is the lobby took a long time and was somewhat inconvenient for tenants while it was ongoing. Fortunately, we fully anticipate whatever we do on the sunken plaza will not disrupt tenants.”