Warrie Price is Remaking the Tip of Lower Manhattan 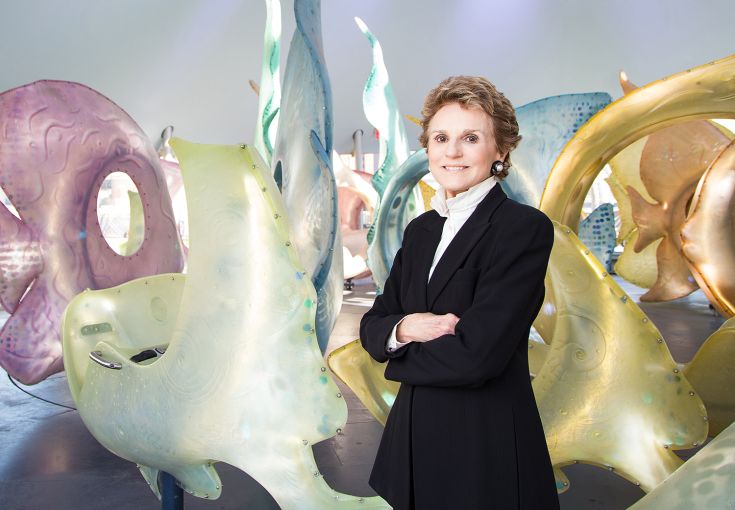 The Battery (known as Battery Park until last year) is humming.

Last August, the park welcomed SeaGlass Carousel, a $16 million, 30-seat merry-go-round, to much fanfare, ushering in a new era for the public green space at the foot of Manhattan: the family-friendly Battery.

This year, Warrie Price, the president and founder of The Battery Conservancy—the nonprofit organization that works in a partnership with the city to maintain and revitalize the park—is taking it a step further by introducing 300 seats in the two-acre oval-shaped lawn in the park and a 100-vendor marketplace around it in June for two days. The vendors will be selling organic, fresh vegetables and meats, something a little difficult to find in the grocery-starved Downtown neighborhood. (Although that might be starting to change—see story on page 20.)

Instead of just being a tourist way station for ferries to Staten Island and the Statue of Liberty, the park will transform into an amenity for the thousands of workers in the office buildings that have called Lower Manhattan home for decades, while being a family-friendly resource for the influx of residents coming Downtown.

“The Battery is ready now to be embraced by the community that lives around it,” Ms. Price told Commercial Observer. “This is a huge asset. We’re the fastest-growing residential neighborhood in the city. It’s time, the conservancy is ready to welcome you to really enjoy the next stage.”

Mr. Price has been on a 22-year mission to revitalize the park. Since The Battery is not a landmark—although its history traces back to the 1600s when early Dutch settlers erected a “battery” of cannons to defend the island—Ms. Price has dramatically transformed just about every inch of the park since founding the organization in 1994.

Over the years, the conservancy has collected $46 million from private donors for capital projects and $92 million from grants and

public funds for maintaining and operating expenses. Completed projects include renovating the promenade, adding custom-crafted benches, creating a garden and also a farm that grows everything from radishes to tomatoes and carrots to kale and lettuce. In 2012, when Superstorm Sandy devastated a woodland area due to saltwater flooding, the conversancy revitalized the wooded area and added Willow and Swamp Oaks—native trees that could resist such flooding in the future.

“There is no doubt that parks drive economic development—you have seen that at Central Park, you have seen it at Bryant Park and you see it at the Battery,” said Jessica Lappin, the president of the Alliance for Downtown New York, and a member of the conservancy’s board. “People who work in the area or live in the area, they value good, open space. You need somebody who is just going to remain focused on the big picture and just keep driving the agenda.”

For all of her work helping bring the largest public assembly area in Downtown back to life, one would think Ms. Price lived across the street. But she’s been on the Upper East Side for decades, after missing out on buying a home in Tribeca ages ago.

In fact, for someone who casually slips references to Robert Moses and DeWitt Clinton into conversation, she’s not even a native New Yorker. The San Antonio-born Ms. Price is a product of the University of Texas at Austin, where she studied education. The mother of three boys (ages 38, 37 and 32) and grandmother of two came to New York in 1972, where she met her husband James. She worked in the budget office after a fellowship at Harvard University, where she earned her masters in public administration. Before her time in Cambridge, Mass., she worked as an assistant cultural affairs officer in the U.S. embassy in Chile for four years. (She speaks fluent Spanish).

After working in New York City government for a while she also joined Community Board 8 and learned more about the approvals process. She wanted to take on a project to transform the city and saw how dilapidated Battery Park (as it was known then) had become. She didn’t think the park truly reflected how great the city was and dreamed of revitalizing it.

Her dreams paid off. The SeaGlass Carousel—an 11-year project—opened for $5, three-minute rides, and by Thanksgiving Day it had sold its 100,000th ticket. Its design, which features 12 species of glowing, fiberglass fish, which children (and adults) can sit on, is a big part of the attraction. But also, the custom music of the merry-go-round blends seamlessly with the rhythm of the fish as they twirl and hop around.

Currently, Ms. Price has set her eyes on another family-friendly idea after the vendor marketplace. She is aiming to bring in $6 million so she can begin constructing a $14 million playground in The Battery. The nonprofit organization already has $8 million in donations for the project and permits with the New York City Department of Parks & Recreation in place to start right away.

The playground would be expanded from about a half an acre, to nearly triple its size. It will feature a climbing wall, slides, tree houses, sand dunes, sprinklers, a jungle gym and a puppet theater. And Ms. Price is determined to complete the fundraising and begin the construction of the playground this year, which should take about a year and a half to complete.

“It’s got to happen this year,” Ms. Price said. “Just because the momentum is there, we are ready to go. It’s an unappreciated site for what we have got Downtown.”

In another dream, Ms. Price sees the opportunity to add a stage in front the oval lawn for public concerts during the summer. The oval lawn can hold 9,000 people, she said.

And Ms. Price wants to transform the Castle Clinton National Monument, a landmark under the National Park Service, into an indoor theater—which doesn’t seem so crazy, since it was a popular opera house, restaurant and theater in the early 1800s. It was originally built to defend New York City from the British as tensions were rising before the War of 1812. In the mid-1800s it was a processing facility for new immigrants, and from 1896 to 1941 it was the home of the New York City Aquarium. Today it is a ticketing office for the Statue of Liberty and a museum. Ms. Price believes the project, which has already received approvals from the federal government, will have a budget of about $100 million.

Compared to the carousel it seems like a nightmare of a project. But Ms. Price is ready to meet the challenge.

“You have got to keep having a dream alive,” Ms. Price said. “It was such an important part of our city’s history and is just dormant in a sense now.”

With the damage that Downtown suffered as a result of Superstorm Sandy, Ms. Price sees another way the park can enhance the neighborhood: as its first line of defense.

The conservancy has added more gardens and green spaces in place of asphalt to the park to make the soil help mitigate storm surges. Also, the organization has elevated certain areas of the park to shield Downtown from flooding in the future.

“We want to be a protective marsh for all the commercial property that’s on our boundary,” Ms. Price said. “The Battery is not to be saved. The Battery is to be able to [withstand potential damage] and come back.”