Stat of the Week: 71 Blocks 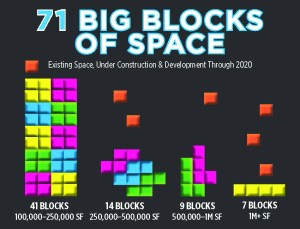 Although 71 blocks of space seems like an overabundant supply, I can remember in 2013 when there were 89 of these spaces available. But, like one of my mentors used to say when market indicators seemed negative, “It’s not the apocalypse!”

With 71 blocks available, there are numerous opportunities for the 75 tenants reportedly in the market with requirements greater than 100,000 square feet. Over the last 12 years, 48 percent of large tenants renewed in place rather than relocated, and trying to figure out which ones may leave versus stay in place can feel like a game of Tetris. The 71 blocks of available space breakdown as follows:

Of the seven available blocks of space greater than 1 million square feet, five of them are new development scheduled to be completed between 2017 and 2020.