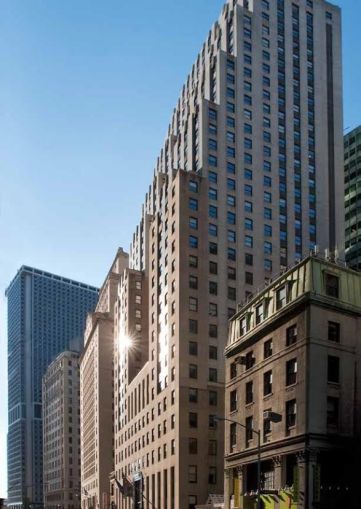 Fabrics and furnishings design firm Robert Allen Group has signed a direct lease at 80 Broad Street between Stone and Marketfield Streets in the Financial District, in offices the company has subleased since 2014.

Robert Allen will remain in the 25,726 square feet it has been leasing on the entire 10th and 11th floors, according to a press release from landlord Broad Street Development. The designer had been leasing out the space from Aegis Communications since winter 2014, a spokesman for the landlord said.

The direct lease is for seven years and will kick in once the sublease expires this August, the spokesman added. Asking rent at the 423,403-square-foot building ranges from the high-$40s per square foot to the mid-$50s per square foot, according to The New York Post, which first reported news of the deal.

Robert Allen, which was founded more than 75 years ago, uses 80 Broad Street for its design, marketing and manufacturing teams, the release indicates.

“We are thrilled we were able to accommodate Robert Allen’s desire to remain in the property through a long-term direct lease that allows the prominent design firm to further maintain its Manhattan operations in one of the Financial District’s premier boutique office buildings,” Ramona Huegel of Broad Street Development said in prepared remarks. “We look forward to providing the firm with the best quality and hands-on management experience it has come to expect from us.”

Ms. Huegel and colleague David Israni represented the landlord in-house, while Jonathan Fein and Joseph Cirone of Cushman & Wakefield represented Robert Allen. The C&W brokers did not immediately return a request for comment via a spokesman.