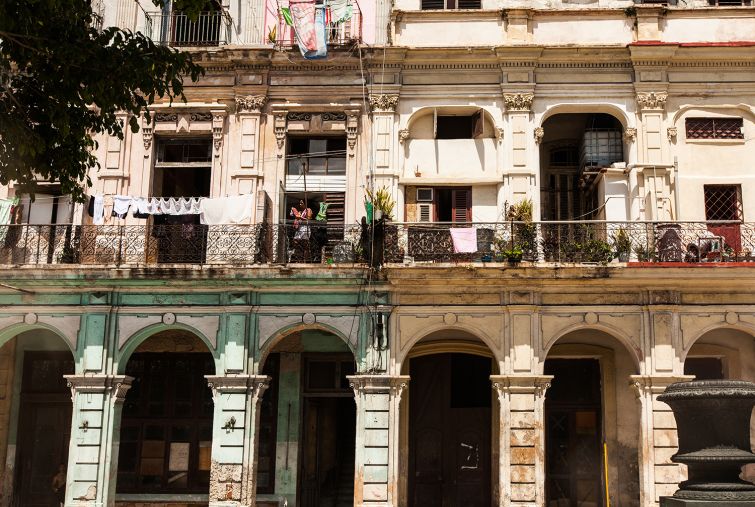 Havana's historic architecture has some potential developers interested in preservation, but hospitality could be the best bet for many (Photo: Emily Assiran/Commercial Observer).

“If I could only live to see it,” says a wistful Hyman Roth (Lee Strasberg), the arch-villain of The Godfather Part II, as he reclines next to his protégé-cum-nemesis, Michael Corleone (Al Pacino), referring to fostering business and criminal ventures in Cuba. Ninety miles away, the character notes on the eve of 1959, industry and organized crime could have “a partnership with a friendly government.”

For more than a century Cuba has captivated residents of the United States with its culture, its cigars and its location in the Caribbean. But friendly the government would not become and anything resembling a partnership it was not willing to go along with. Cuba and the U.S. have been deadlocked in an embargo since the early 1960s with travel to and trade with the island at a standstill.

But that’s changing very rapidly. Since relationships began to thaw in late 2014, interest in development has started to build up for American developers. Currently, U.S. citizens with family in Cuba are allowed to visit residents of the country, and commercial flights in and out of Havana have begun launching from U.S. airports. The Cuban embassy in Washington, D.C., was opened for the first time in 50-plus years, and three governors have made trade missions to the island in the last year. Last week’s news—that President Barak Obama is planning on visiting the island in March—just seemed like the latest signpost on the way to an unstoppable and historic rapprochement.

The trade embargo is still in place, meaning supplies and people don’t go in and out at a high volume. But calls have escalated for Congress to repeal the ban, which was first implemented in 1960. Should the embargo come down, however, there would likely be a hike in hospitality investment and development in metropolitan areas, like Havana, as many Americans are expected to flood Cuba. But problems lie ahead, and competition from other nations is already well established in the country.

“[The hospitality industry] is wildly interested in Cuba and has been eagerly waiting for an opportunity to move in that direction,” said Sean Hennessey, the founder and chief executive officer of national hotel consultancy Lodging Advisors. “The island can support a broad range of hospitality from economy all the way up. There are efforts that need to be undertaken to get to that level, but it’s a very attractive market when you think about the opportunity.”

A May 2015 JLL report found that hospitality would be the most feasible of real estate investments for U.S.-based companies looking to establish business in Cuba. However, because many Canadian, British and other nations have long been investing in the country, most U.S. companies will “remain largely on the sidelines,” the report indicates.

The Cuban government has been focused mostly on developing resorts and has partnered in the past with private entities to build them, according to the JLL report. As of 2013, there were 127,400 hotel rooms throughout the country, according to Cuba’s National Office of Statistics, but occupancy was a mere 54.6 percent.

But should Americans start landing in droves, that number will undoubtedly change. The JLL report notes that U.S. citizens make up roughly 10.5 percent of all tourists in the Caribbean (but that’s only by those who travel to the region by air, not counting travelers who opt to cruise there).

Mr. Hennessey said there are a lot of “ifs” about what the business scene could look like in Havana and other Cuban cities in the years to come. One problem developers face is what sort of percentage of revenue the communist government would demand from investors, Mr. Hennessey said.

Training a class of Cubans to work in the real estate industry and other economic fields will be an important next step, agreed Jorge Pérez, the chairman and CEO of The Related Group, a Miami-based sister firm of Related Companies in New York. Mr. Pérez, who lived and traveled there in his youth before Castro took power in 1959, said he believed that investment would be a long way off because a workforce would have to be coached in western norms, procedures for investment would have to be set up and infrastructure would also have to be rebuilt.

Mr. Pérez said he would be interested in preserving many of the country’s older buildings, some of which date back to the 19th century, when Cuba was still a Spanish colony.

“I would be much more interested, for example, in historic preservation of great buildings,” he said. “Training a Cuban intelligentsia and a new entrepreneurial class, remember after [nearly] 60 years of this government, you know, there’s gonna be a lot of work to be done before Cuba becomes a country that can effectively roll industries in a private sector.”