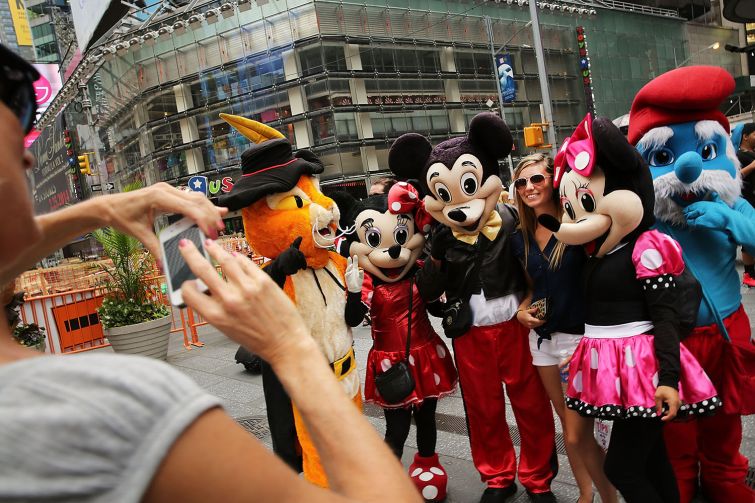 Legislation to regulate pedestrian plazas congregated by costumed characters in Times Square would have to come soon, according to the district business improvement group (Photo: Spencer Platt/Getty Images).

Minnie Mouse and Hello Kitty got into a rough-and-tumble that led to them being slapped with handcuffs. Then Spider-Man duked it out with a civilian on the very streets he swore to protect. All the while, topless women danced around as the police took pictures with them.

What might sound like a 4-year-old’s lucid dream during a fever has become a nightmare for landlords, tenants and city officials. The buskers and scantily clad cowpokes who draw in thousands of tourists to Times Square a year have become increasingly eager to get a tip in exchange for a photograph with them—calling to mind a Disney and Sesame Street rendition of the district’s seedier days. The mayor’s office formed  task force last year, which has been working to come up with a solution.

But legislation to enact new regulations on these characters and the public plazas they congregate in would have to be introduced within the next month, according to the area’s business improvement district, in order for the changes to kick in before the tourist-heavy summer when temperatures and tempers in Times Square start to rise.

“Nothing has come out yet, but I do think the City Council is working on something,” said Tim Tompkins, the president of the Times Square Alliance, which represents landlords and tenants in the area. “The mayor is also looking at some [issues].”

The city assembled a task force last year to look into regulating the various buskers, characters and performers in Times Square. They sought to address best practices to regulate the public plazas currently in the area, as well as those under construction and slated to open in the spring of 2017.

In October, the task force recommended that the New York City Department of Transportation have the authority to regulate such things as plaza congestion, vendors on the streets and how they conduct themselves. Legislation is required to give the DOT the power to do so because the plazas technically aren’t the sidewalk, nor are they the street.

“This was a new category of space,” Mr. Tompkins said. “The city agreed, the DOT agreed, the mayor agreed. The next step is to actually to propose specific legislation to do that.”

But because the legislative process is a lengthy one, Mr. Tompkins said something would need to come out in the next month to enact a law, as well as go through the rule-making process.

A spokesman for Councilman Corey Johnson, who represents part of the area and took a role in the task force, said discussions were ongoing, but a specific bill was not yet written up. Councilman Daniel Garodnick, whose district also includes parts of Times Square, did not return a request for comment, nor did the mayor’s office.

But politicians have been vocal about regulating the performers following a few newsworthy instances last summer. The Minnie Mouse/Hello Kitty scuffle last June sparked from the two fighting over a tip. Two months later, a performer dressed as Spider-Man got into it with a man outside of the now-closed Toys “R” Us at Broadway and West 44th Street, telling reporters the man told tourists not to take pictures with or tip Spidey.

The punch-throwing, profanity-spewing characters have naturally made the real estate world nervous. Of course, for most New Yorkers, it hearkens back to a time when the area was home to sex shops (there are still a few remaining) and dirty movie houses.

But in the last 20 years, the area has changed and is now home to national retailers and office tenants including Thompson Reuters, Ernst & Young and Morgan Stanley. The problems are important, but nothing as bad as those in the late 1980s and early 1990s.

Times Square “has its issues, but these are positive issues compared to where we were 20 or 25 years ago,” William Rudin, the chief executive officer and vice chairman of Rudin Management Company, said at Commercial Observer’s “Times Square: The Next Act” breakfast panel last week. “We can solve these issues. We’re already solving them and it’s all part of the positive growth and we’re victims to some degree of our own success.”

Retail spaces in Times Square have become coveted and expensive. A fall report by the Real Estate Board of New York found that the bowtie—Broadway and Seventh Avenues between West 42nd and West 47th Streets—had the second highest ground-floor asking rents in Manhattan, averaging $2,300 per square foot; that’s about $1,000 below the asking rents of Fifth Avenue between 49th and 59th Streets, but it’s well ahead of the next highest average asking rent, $1,613 per square foot, along Madison Avenue between East 52nd and East 57th Streets.

But the unruly actions of a few performers in Times Square could impact those numbers, especially since they congregate and fight for tips outside tourist-heavy retailers such as recently defunct Toys “R” Us at 1517 Broadway.

“Those characters have gotten to the point that there [are] so many,” said C. Bradley Mendelson, vice chairman at Cushman & Wakefield, who represents the landlord of 1517 Broadway. “I think that it’s scaring away a lot of the tourists that are in Times Square. I know the retailers don’t like them there.”