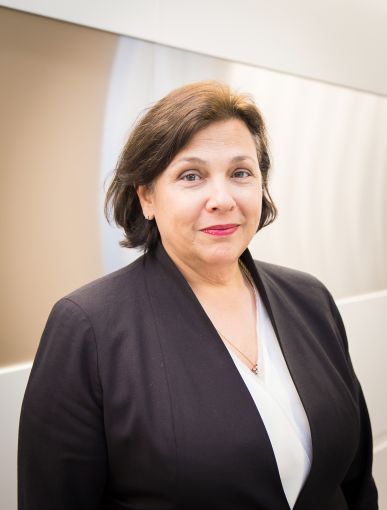 Nicki Livanos has been with AXA Equitable Life Insurance Company as a whole for dozens of years. In her current role as director of real estate investments, she is responsible for a portfolio totaling over $8 billion. Ms. Lavanos has seen the firm evolve from Equitable Life Insurance Society to Equitable Life, then into its most recent manifestation, AXA Equitable. Having been around for a cycle or two, she shared a sound piece of advice with Commercial Observer: Always, always maintain your underwriting standards. As we enter a year where commercial real estate is going through some serious changes—with regulations changing the rules of the game and more than $210.5 billion in commercial mortgage-backed securities deals maturing before 2018—Ms. Lavanos’ words resonate. She also discussed why AXA has transitioned from direct ownership of real estate to debt investments on real estate assets and how the firm’s construction lending business indicates how far along the industry is in terms of recovery from the downturn.

Ms. Livanos: I’ve worked on many different sides of the table with regard to [AXA’s] real estate portfolio, so I’ve seen the evolution of the portfolio, from when it was largely direct equities. Now, it’s largely debt instruments, mortgage loans and structured products. We’ve shifted into primarily debt, as it is a very strong asset liability niche, and that’s really why we’re primarily a real estate lender as opposed to a direct owner.

What are some of the most exciting deals the firm has lent on recently?

As far as markets are concerned, it’s kind of easy to say we target major markets. We do like to be in major markets, but there are also very strong secondary and suburban markets. I think it’s fair to say we evaluate not only the strength of the market, but also the strength of the deal. We are a balance sheet lender and don’t securitize anything, [so] each investment has to stand on its own merits because we’re going to live with it for 10 years. We are in about 35 states.

On the debt side, I think we’ve had a really great year. We closed probably about five construction-to-permanent loans on the multifamily side, which is very exciting to us because they are non-New York—very infill locations. As everyone knows, construction loans have a lot of complexity to them, and in years past it was hard to accumulate multifamily [product] because Fannie Mae and Freddie Mac basically had that market sewed up. We’ve been very fortunate to have closed on several construction-to-permanent loans and the [deals] we originated about two years ago are now stabilized.

During the Great Recession, there was really no new construction lending, so that space was inactive up until about 2012. We started up doing construction-to-perm loans in 2012 and are now seeing the fruits of those labors become stabilized, occupied assets.

Are there any locations or asset classes where you see untapped opportunity?

We are not only part of the brokerage community, but we have a whole origination group down in Atlanta so we see our share of what’s going on. I can’t say there’s anything we’ve seen that’s untapped.

Where are we in the real estate cycle?

In any particular market you could be in a different inning of the cycle, and since we typically don’t know what inning we’re in when we’re in it, the only conservative thing we can do is stick to our underwriting fundamentals. It’s easy to have 20/20 hindsight. When you’re in it, do you really know what inning you’re in? You don’t. That’s why you have to maintain your underwriting and that’s the only thing that really keeps you on track in the event of another hiccup in the cycle.

There’s been a lot of buzz about CRE regulations, like Regulation AB II and risk retention. Are there any challenges or regulations specific to life insurance lenders on the horizon?

As far as regulation is concerned, most of the regulation we have seen has been focused on the banking industry and CMBS. As an insurance company, we were not really impacted negatively during the Great Recession. If you go back and look at any American Council of Life Insurers statistics, we came out very well. There’s a reason we were able to have that kind of result during a severe downturn. The reason is primarily because we focus on credit, underwriting, strength of the borrower and we have always targeted high quality loans. When you stick to your knitting and have certain standards that you won’t go too far afield from what you believe is a reasonable, customary way to lend, you will have that kind of result.

How will the maturity wave affect your business?

Moving forward to 2016, there are a lot of expected maturities, because 2006 was a very large origination year. But in looking at the profile of what was originated in 2006, a lot of it was refinanced or paid off in some manner, or has been extended, so we’re not seeing a wave of maturities. We’re seeing something that’s been tempered a bit by actual transaction activity. We still believe 2016 will have plenty of opportunity for us to perhaps increase our allocations. As you come out of the cycle and things are getting progressively better, you have to understand new loan originations not only consist of refinancing existing loans, but also new purchases—that mix has been increasing.

The interest rate environment, which is the lifeblood of all real estate transactions, has been extremely low in the last several years—historically low. And while the Fed determines what direction those interest rates take, it will have an impact on the level of transactions activity. That being said, as long as the economic environment continues to be positive—we’ve seen positive gross domestic product growth over the last several years—that will work its way into improving fundamentals within the real estate operation. What do we mean by fundamentals? Vacancy rates, rental rates, all of the operating fundamentals. That will probably temper the rise in interest rates.

What we’ve seen happen over the last several years is a very favorable interest rate environment, but real estate fundamentals have been lagging in recovery. One leg of the stool moved forward quickly while the other was lagging behind. We expect [those] fundamentals will improve.

When you take a look at economic factors like GDP, unemployment and all the wonderful things they use to describe economic activity, the actual real estate fundamentals that they get translated into typically lag behind those indicators. We haven’t felt that because interest rates are so low. When interest rates rise or fall, it has an immediate effect on transaction activity, so I think you’ll see a tempering offset by improvement in fundamentals.