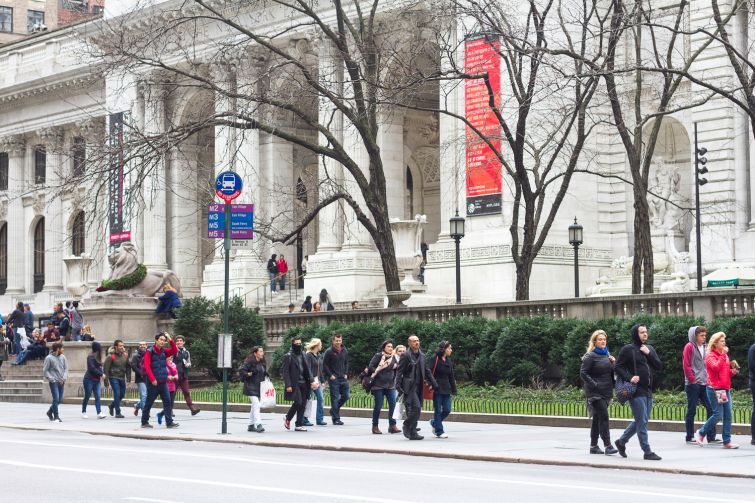 Bus shelters are slated for areas such as outside of the New York Public Library's main branch.

The holiday season has ended and decorations have been coming down on Fifth Avenue. But as the lights and displays go away, another kind of street art will be going up.

In the spring, there will be 15 new bus shelters erected along the world-famous thoroughfare between 35th and 58th Streets, which will include the glass, roofs, benches and advertising you see everywhere else in the city. But while this might be welcome news to straphangers, some in the real estate industry are furious that the Manhattan avenue will soon be littered with the structures at roughly one-third of the street’s bus stops, creating more pedestrian traffic. Also, they will take up sidewalk space.

“The sidewalks on Fifth Avenue are the most congested in the city,” real estate attorney Stuart Saft, a partner at Holland & Knight, said via email. “Building bus shelters will only make it more congested and also create a barrier behind which muggers can hide before they pounce on a tourist.”

Along those 23 streets, there are 40 existing bus stops on the east and west sides of the avenue, of which 15 will be sheltered. More of the bus stops could be covered later, should the community desire the street furniture, according to a spokesman for France-based outdoor advertising company JCDecaux, which is building the structures.

Some of the prominent locations approved by the city’s Franchise and Concession Review Committee include the northwest and southwest corners of Fifth Avenue between West 41st and West 42nd Streets, according to the division’s September hearing agenda. Those spots are in front of the New York Public Library’s main branch. A few blocks north, there’s another shed slated for the northwest corner of West 54th Street and Fifth Avenue, outside of the University Club. Further uptown, the city has okayed a shelter in the vicinity of 754 Fifth Avenue between West 57th and West 58th Streets.

There are several New York City bus lines that service that particular swath of Fifth Avenue, including those routed just in Manhattan, as well as lines running to the Bronx, Brooklyn and Queens. Daily ridership on each of those Manhattan lines—the M1, M2, M3, M4 and M5—averaged between 10,282 and 17,735 people a day in 2014, according to the most recent data from the Metropolitan Transportation Authority.

“Bus shelters are an important public amenity,” Manhattan Borough President Gale Brewer said in a statement to Commercial Observer. “We worked hard with the administration to strike a balance that would benefit the entire borough—adding shelters in neighborhoods that didn’t have enough, negotiating better locations for some shelters in crowded areas and ensuring the final plan would result in a successful, stable franchise.”

So how did this all start? Last fall, advertising company Cemusa’s city bus shelter franchise was transferred to its new parent company, JCDecaux, which will now manage advertising on the street furniture. There are 11 years remaining in Cemusa’s 20-year franchise agreement with the city. Over that time, JCDecaux will pay $650 million to build the remaining shelters, news kiosks and public bathroomsthrough the agreement. Cemusa in 2005 won a bidding process with the city to pay $1 billion to build 3,300 shelters, along with more than 300 newsstands and 20 public restrooms, as widely reported at the time. Part of the franchise transfer allowed for the Fifth Avenue shelters to be built. The JCDecaux spokesman declined to provide the cost of each shelter.

As part of the deal, the company will provide the city’s tourism arm, NYC & Company, with $20 million per year worth of free advertising on billboards in 3,500 cities across 70 countries.

No one seems to deny that this will be a boon for riders who no longer have to be exposed to harsh weather. But with already congested sidewalk traffic, some are worried that it could impact businesses along Fifth Avenue.

Indeed, it can be one of the busiest streets to walk on. On the morning of New Year’s Eve, when many had taken the day off, Fifth Avenue was bustling at 10 a.m. Walking through the Lord & Taylor holiday display between West 38th and West 39th Streets, for instance, was essentially navigating a live maze of tourists taking photos. Further north at the corner of West 59th Street, others were ogling some of the window displays at Bergdorf Goodman.

The Fifth Avenue Business Improvement District, which represents landlords and retail tenants on the street, did not return repeated requests for comment, nor did prominent landlords and shopkeepers on the strip.

The famous thoroughfare commands some of the borough’s highest retail rents. A December Manhattan retail report from the Real Estate Board of New York found that asking rents along Fifth Avenue this fall were $1,203 per square foot at the ground level for stores running from 42nd to 49th Streets. That number came close to tripling further north, with asking rents averaging $3,397 per square foot between 49th and 59th Streets.

“In general, bus shelters are good, protecting riders from the elements,” said retail broker C. Bradley Mendelson, a vice chairman at Cushman & Wakefield, via email. “In the case of upper Fifth Avenue [in the 50s] where the streets are already hard to navigate, due to the heavy pedestrian traffic, I think it’s a mistake. We need more sidewalk, not less.”

Real estate stalwarts are also concerned that bus advertising will block an otherwise clear view along the avenue. Their argument is that the streets are zoned to ensure that nothing—such as, say, a bus shelter or a news kiosk—blocks the iconic view that features the likes of Cartier and Tiffany & Co.

A New York City Department of Transportation spokeswoman told CO that the new bus shelters don’t violate the incumbent zoning. “Regarding the zoning resolution, it does not apply to signs or advertising on streets,” she added.

Within the zoning rules or not, that hasn’t stopped some from worrying about what they’ll look like when lined up next to high-end retailers that make the avenue famous.

“The appearance of Fifth Avenue will change with bus shelters with advertising,” Mr. Saft said. “Is someone from the city going to decide whether an ad for a men’s club should not be outside Tiffany, or an ad for a low-end retailer should not be outside Saks Fifth Avenue? Of course not: the city will lease the space for the most that it can get and focus on the unintended consequence of bad ad placement.”

But some brokers believe the advertising will be a good for the existing and coming retailers to Fifth Avenue, who will have “another media outlet” to use to sell their location, said Faith Hope Consolo, the chairman of Douglas Elliman’s Retail Group. Ms. Consolo, who’s currently marketing retail space at 390 Fifth Avenue at the corner of West 36th Street, added that the shelters could give some directions and points of reference for otherwise confused out-of-towners.

“I know it’s a crowded street, but there are so many confused tourists all the time. I think it’ll be helpful,” Ms. Consolo said. “This will be good for there. There’s a lot going on.”