Stat of the Week: 130-Basis-Point Drop 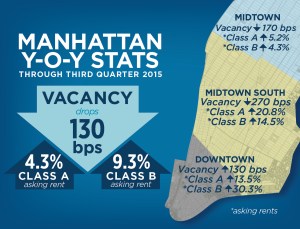 Year-over-year, the Manhattan office market is booming though the third quarter. The overall vacancy rate is down 130 basis points to 8.9 percent from 10.2 percent last year. Absorption is strong this year, with positive 2.4 million square feet recorded so far. Leasing activity is down 10.3 percent from the same time last year, due to a lack of large leases signed (only two greater than 400,000 square feet.) Asking rents continue to climb, as Manhattan Class A asking rents are up 4.3 percent to $76.95 per square foot this year and Class B asking rents jumped 9.3 percent to $59.52.

Midtown South remains the strongest of the three major markets in Manhattan over the past 12 months, as the vacancy rate is down 270 basis points to 5.8 percent. Asking rents soared over the past year, with Class A reaching $80.17 per square foot, a 20.8 percent increase and the highest level reached all-time. Class B asking rents skyrocketed, as well, up 14.5 percent to $69.66 per square foot.

The Midtown vacancy rate also made substantial strides this year, down 170 basis points to 9.3 percent. With leasing activity down this year throughout Manhattan, Midtown remains the only market to post higher volume, up 3.5 percent compared to this time last year. Asking rents continue to slowly increase; Class A asking rents are up 5.2 percent to $83.74 per square foot, while Class B asking rents grew by 4.3 percent to $59.01.

The Downtown market stalled over the last 12 months, as the vacancy rate is up 130 basis points to 10.3 percent. Leasing activity is down 37.2 percent year-over-year, due to a lack of large leases signed. During the third quarter, leasing activity started to heat up, as four new leases over 75,000 square feet were signed compared to three during the previous three quarters. Class A asking rents are up 13.5 percent compared to this time last year to $61.18 per square foot, while Class B soared 30.3 percent to $51.29.