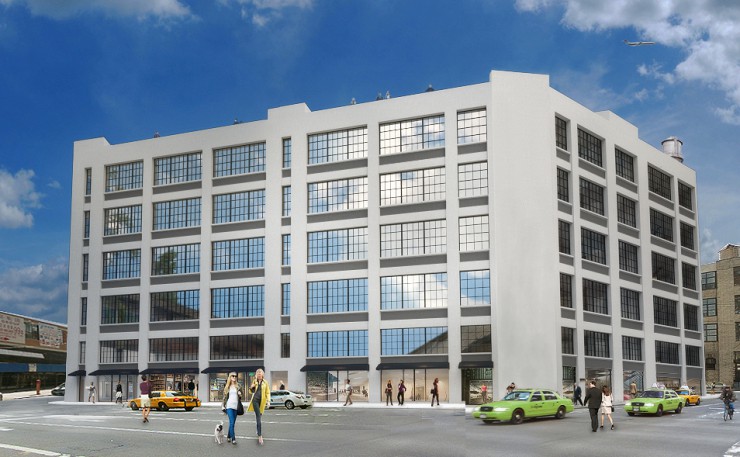 A rendering of 455 Jefferson. dghigliotty

The one-year-old direct lender Mack Real Estate Credit Strategies originated a $51.2 million mortgage to fund the acquisition and conversion of a six-story warehouse in Bushwick, Brooklyn, Commercial Observer has learned.

HFF negotiated the three-year, floating-rate loan on behalf of a joint venture between the Dallas-based real estate firm Lincoln Property Company and the Boston-based real estate private equity firm Alcion Ventures. The JV partners purchased the industrial property at 1300 Flushing Avenue for $46 million in April and plan to convert it to a Class A mixed-use office building to be called 455 Jefferson.

The 101,712-square-foot property, which sits on the corner of Cypress Avenue, was constructed in the 1930s. Once the redevelopment is finished, the building will contain 122,697 square feet of office and retail space with high ceilings, natural light and exposed structural work, according to the new owners.

The conversion, which began this month, is due for completion in June 2016, said James Stein, a senior vice president in Lincoln Property’s New York office.

Lincoln and Alcion will gut the building and install a new lobby, windows, bathrooms, elevators and HVAC. The property is located two blocks from the Jefferson Street L train stop, which provides direct access to Manhattan’s Union Square.

“We’re catering to TAMI tenants and have three potential tenants who have expressed interest in the building,” Mr. Stein said. “There have been so many new bars and restaurants, and they’ve all been really excited for 500 young people working in the neighborhood instead of coming at night.”

“Lincoln and Alcion have identified a unique asset that is poised to refine the landscape for Brooklyn creative office,” Mr. Peck told CO. “The expansive floor plates and ceiling heights coupled with unparalleled connectivity to the L train at Jefferson will surely garner attention from all tenants looking for a presence in Brooklyn.”

MRECS, which is headed by Richard Mack and the former Blackstone Group executive Peter Sotoloff, launched last fall. The company set out to raise a real estate debt fund of more than $750 million and has hired loan originators from J.P. Morgan Chase and Deutsche Bank over the past year.

Messrs. Mack and Sotoloff were not immediately available for comment.