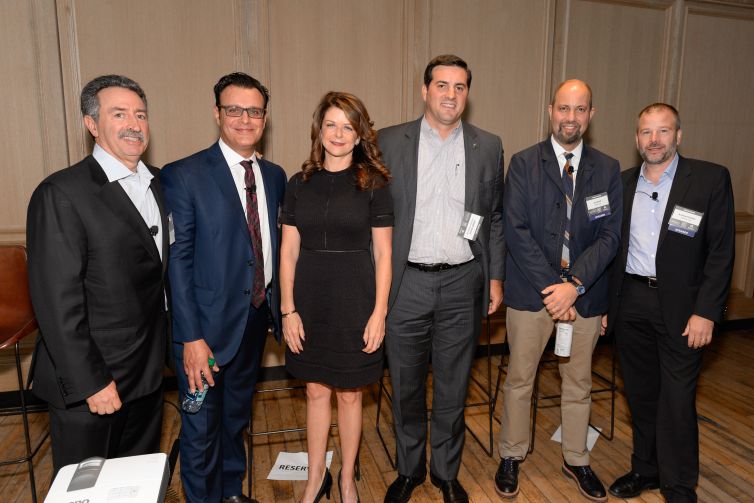 When it comes to Brooklyn, the power players in the borough have fully bought into the idea of live, work, play—which was on full display at the Commercial Observer’s “Brooklyn Renaissance” panel on Wednesday in Industry City.

Over 200 people, including top dogs of the real estate business like Michael Phillips of Jamestown and Bill Rudin of Rudin Management, made their way out to Sunset Park to hear some of the best minds in Brooklyn expound on the borough’s future and when it moved from a value play for commercial and residential tenants 10 years ago has now become a resurrection of Brooklyn’s industrial might.

MaryAnne Gilmartin, the chief executive officer of Forest City Ratner Companies sat on the panel, as did Andrew Kimball, the CEO of Industry City, Ofer Cohen, the founder of Brooklyn-based TerraCRG, Joseph Cirone of Cushman & Wakefield and Jim Brett of West Elm.

Innovators in the maker economy are coming to the old factories, housing and office space are in strong demand and communities are being formed in these neighborhoods, the panelists said, a little boost from the city could go a long way.

Community was an overarching theme amongst the panelists, especially in areas such as Dumbo, the Brooklyn Navy Yard and Sunset Park where startups in the maker economy—manufacturing, design and technology—have been cashing in on converted industrial properties.

“You’re seeing an influx of folks going [to these neighborhoods] because it is a small community feel in a big city,” said Mr. Cirone.

Those company founders and employees are thriving for a live-work-play environment in which they live walking distance from their job, work in places that stay open late with food choices in the building and amenities all within their neighborhood.

“You know, I don’t really live in New York. I live in Dumbo,” said Mr. Brett of West Elm, whose company is based in the section of Brooklyn, as well as in Sunset Park’s Industry City. “It’s a proven trend that [people] don’t want to commute.”

The setting was, itself, a testament to some of the things the panelists were talking about; the 6 million-square-foot Industry City is home to some 400 different businesses including heavies like Time, Inc. and the Brooklyn Nets, but also retains much of its Kings County credentials; the space was decked out in wood, there were pool tables a few feet from where the panel took place, and to get to the event attendees had to pass by local chocolatiers and bakers who had all found homes in Industry City.

The conversation was moderated by Fried Frank’s Jonathan Mechanic, who, in addition to asking about Brooklyn’s desirability also took aim at what was still holding it back.

The city could do more to increase mass transportation and helping companies move to the area, for example. Mr. Kimball suggested New York could look at different ways to transport people along the waterfront from north to south. He and his fellow panelists also agreed the city could do more in terms of zoning and incentives to have companies jump across the East River and relocated to Brooklyn.