Before the Renaming for Dinkins, There Was Koch, RFK and FDR 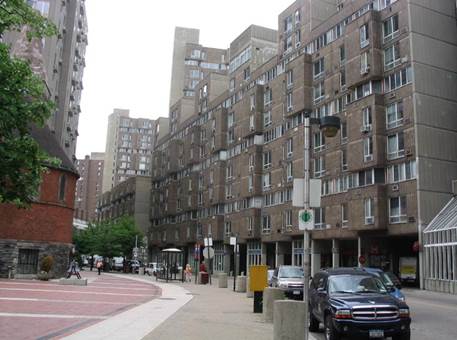 The mostly residential Roosevelt Island was home to prisoners when it bore a different name. mgross170

There was a bit of confusion, celebration and head scratching last Friday when Mayor Bill de Blasio announced he was planning to rename the Manhattan Municipal Building at 1 Centre Street after his old boss, former Mayor David Dinkins.

Sure, naming pieces of New York City—bridges, streets or buildings—after prominent politicians and business leaders is nothing new. After all, Madison Avenue’s namesake was President James Madison, and John D. Rockefeller, Jr. reluctantly allowed his family name on the complex he developed that’s famously Rockefeller Center.

But when it comes to those who are still with us, some New Yorkers think it’s a little premature: “Stop naming stuff after living people,” tweeted former Councilman Peter Vallone, Jr.

Renamings have sometimes drawn criticism when it comes to who gets the honor, and, more recently, when they do. With the newly minted David N. Dinkins Municipal Building, let’s take a look at three renamings in the last few years that drew the ire of some officials or taxpayers:

2010: Then-Mayor Michael Bloomberg and then-City Council Speaker Christine Quinn successfully led a push to rename the Queensboro Bridge after former Mayor Ed Koch. But the idea of the Ed Koch Queensboro Bridge didn’t set well with some members of the council, namely Mr. Vallone who represented the areas north of the bridge’s Queens side. Mr. Vallone’s take was that the city was wrong to name a nearly 100-year-old fixture after someone who was still alive.

That didn’t stay an argument for too long, since Mr. Koch died in January 2013.

“I’ve been very consistent on this—do NOT name things after living people!” Mr. Vallone said in an email to Commercial Observer, adding someone could still damage his or her reputation like former State Senate Leader Joseph Bruno. Mr. Bruno, who was once charged with eight counts of mail and wire fraud but later acquitted, is the namesake of the Joseph L. Bruno Stadium in upstate New York.

“And don’t forget renaming the Municipal Building was MY idea, as an alternative to changing the name of the Queensboro—which was a slap in the face to our whole borough and was massively unpopular,” said Mr. Vallone, who’s slated to become a civil court judge. “I have nothing personal against [Mr.] Dinkins—just as I didn’t against [Mr.] Koch—I like them both personally, but this is a bad policy.”

2008: For more than 70 years, we knew it as the Triborough Bridge—linking Manhattan, the Bronx and Queens—or simply the Triborough. But in June 2008, the New York State legislature passed a bill to rename it the Robert F. Kennedy Bridge after the former senator and attorney general, who also spent part of his childhood in the Bronx.

It cost the state an estimated $4 million to change all the signs after the renaming kicked in, as The New York Times reported in November 2008.

1971: That strip of land sitting between Manhattan and Queens has had a lot of names over the years. First, Blackwell’s Island then Welfare Island and you know it better today as Roosevelt Island, named for President Franklin D. Roosevelt in 1971. But the islet in the East River has a dark past when it bore its former names, notably as a prison holding the likes of anarchist Emma Goldman, political kingmaker Boss Tweed and Prohibition-era gangster Dutch Schultz.

With a new name and park honoring the 32nd president, the future is a bit brighter for Roosevelt Island, however. Cornell University and Israel-based Technion are building a 2-million-square-foot technology-focused campus. The Related Companies has completed its seventh building on the island, Riverwalk Point. Studios rent for $2,400 to $2,850 per month.