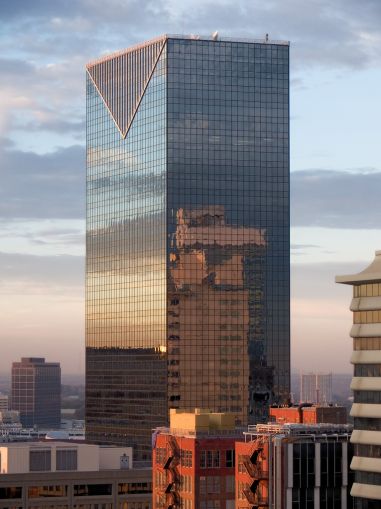 A Providence, R.I.-based bank is adding fire to the phrase “Hot ’Lanta”.

Citizens Bank provided a $64 million loan for the purchase of an Atlanta office building whose tenants include Turner Broadcasting and executive offices for the Atlanta Hawks, Commercial Observer has learned.

Durham, N.C.-based The Dilweg Companies secured the debt, which will go toward the firm’s acquisition of the 655,000-square-foot Centennial Tower. The 40-year-old building is in the heart of the city’s Downtown area.

A spokesman for Citizens declined to provide the terms of the loan.

“As a new client, we were impressed by how quickly and effectively the Citizens Commercial Real Estate Finance team was able to complete this transaction,” Anthony Dilweg, the founder of The Dilweg Companies, said in prepared remarks provided to CO. “We look forward to working more with Citizens in the future.”

The real estate investment firm paid $68.8 million for the 36-story tower in August, according to the Atlanta Business Chronicle. That gives the debt a 93 percent loan-to-value ratio.

The Atlanta Dream, part of the Women’s National Basketball Association, signed a deal in 2013 to move its corporate headquarters to the building. The team settled into the building the following year, joining other tenants including tech companies Peer 1 Hosting and Oracle. The building was 75 percent occupied when the sale closed this summer, the Atlanta Business Journal reported.

Gary Magnuson, the head of commercial real estate finance at Citizens, told CO in August that the lender was targeting debt deals ranging from $20 to $75 million. He added that the key markets for the commercial bank have been on the East Coast, as well as Chicago.