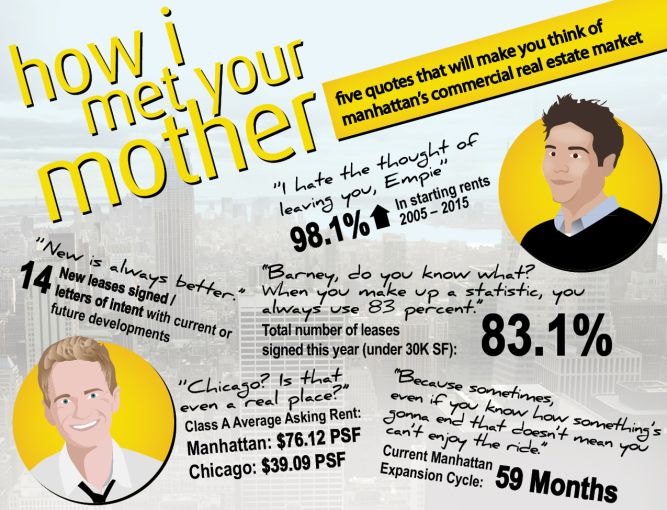 On September 19, 2005, a television sitcom, based primarily in New York City, opened with the line, “Kids, I’m gonna tell you an incredible story—the story of how I met your mother.” And after nine full seasons, How I Met Your Mother gave us some quotes that are LEGEN—wait for it—DARY! In honor of the 10-year anniversary of the pilot episode, here are some quotes from the show that made me think of the Manhattan commercial real estate market. So, as Barney Stinson would say, “Suit up!” and enjoy the stats.

5. “I hate the thought of leaving you, Empie.” – Ted Mosby saying goodbye to the Empire State Building before he was supposed to move to Chicago.

What better way to address Ted’s love for the Empire State Building than by comparing the average starting rents for the building in 2005 to 2015? Ted would be proud of the 98.1 percent increase in starting rents that the building has achieved over the past 10 years.

4. “Chicago? Is that even a real place?” – Barney Stinson’s comment in reference to Ted taking a job in Chicago.

Barney might be referring to the difference in Manhattan and Chicago asking rents, as Manhattan office space is almost twice as expensive as Chicago. Manhattan Class A asking rents average $76.12 per square foot compared to Chicago’s $39.09—94.7 percent higher.

Clearly the decision-makers in 14 companies that signed leases or letters of intent within current and future development projects throughout Manhattan this year were listening to Barney.

2. “Because sometimes, even if you know how something’s gonna end, that doesn’t mean you can’t enjoy the ride.” – Ted Mosby.

Analyzing Manhattan expansion cycles going back to 1960, each cycle lasted four to six years. The current expansion period just reached month number 59. We don’t know how long this cycle will last and think it could surpass previous lengths, but like all good things, it will eventually come to an end. So enjoy the ride.

If Barney was referring to the percentage of total number of leases signed this year being under 30,000 square feet, he would be spot on at 83.1 percent.