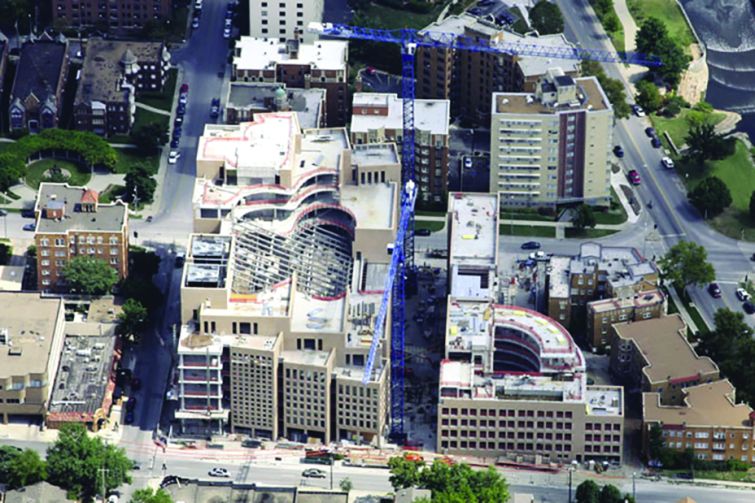 The West Edge development in Kansas City, Mo., before it was sold at auction.

Wisconsin-based lender Banker’s Bank, referred to as BB Syndication Services in court documents, lost its suit against First American Title Insurance Company this March, setting a precedent that a construction lender’s title insurance does not cover construction liens that arise as a result of insufficient construction funding.

The question the case raised was whether or not a construction lender “creates” or “suffers” a mechanic’s lien—a security interest granted to individuals or firms who help build or provide materials on a property—when they choose to cut off loan funds.

After a split ruling in federal court that stated the insurer violated its duty to defend BB Syndication, but did not indemnify the insurer, BB Syndication appealed. On March 12, 2015, Judge Diane Sykes, of the United States Court of Appeals, Seventh Circuit, ruled that the scope of the title insurance did not cover BB Syndication’s claim because BB Syndication had the authority and responsibility to prevent and discover insufficient project funds before releasing part of its $86 million loan to the borrower.

“The Seventh Circuit, to an extent, charted their own course with this case,” Steven Slawinski, a partner at the Wisconsin-based law firm O’Neil Cannon Hollman DeJong & Laing and legal counsel of First American, told Commercial Observer over the phone.

“They created a rule, which I think is unique for the issue that was presented to it, and their ruling is that where construction liens arise due to inadequate project funding that title insurance policies will not cover those liens,” he said. “That goes further than any other court has gone of the several courts that have addressed the case of this nature.”

The development firm hired J.E. Dunn Construction Company to build the mixed-use project. Roughly a year and a half into construction, Dunn claimed that Trilogy made changes to previous plans, driving up construction costs by $20 million to $30 million. While BB Syndication had the right as a lender to cut off funding because development costs became imbalanced, the bank chose to continue disbursing funds, later claiming its decision to do so was in good faith. At that point, the lender had only released $5 million of its loan.

“The way I would read it is that this particular lender knew from the beginning that the budget was out of balance,” Gary Goodman, real estate partner in Dentons’ New York office, told CO. “In this case it seems that the lender shouldn’t have even started funding.”

“Construction loans are really a whole different animal than term loans,” Mr. Goodman added. “Term loans go out the door the first day, and usually, for a project that’s up and running, you have cash flow from day one. You may still have money earmarked for tenant improvements, allowances and earn out as rents grow, but it is still simple compared to construction loans, where many things can go wrong.”

He explained that as construction unfolds, final signed contracts change because more refined estimates may come in, and there may be change orders, or delays—all occurrences that could increase, or in some cases decrease, necessary funding.

About one year later, Trilogy missed payments to its construction firm, so Dunn and its subcontractors stopped working and filed liens against the project, according to notes from the judge’s ruling. Trilogy proceeded to hire a new contractor and informed its lender that the project was short by $37 million. BB Syndication, which released a total of $61 million in funds at that point, cut off loan disbursement and declared the loan in default, which created additional liens for the recently performed work.

“One of the tools available to this lender was a typical tool in construction loan agreement documents,” Mr. Slawinski said. “If there is a lending shortfall or cost overrun the lender can demand that the borrower come up with cash to cover the shortfall. This lender had the ability to do that in this case.”

He also pointed to other mechanisms lenders could utilize to avoid such a situation.

“One of the tools lenders have is their own due diligence during the underwriting process,” he said. “If you do a good job in terms of evaluating the creditworthiness of the borrower, the lender can get personal guarantees from the principals involved with the borrower. The lender can require bonding.”

Trilogy filed for bankruptcy when BB Syndication called for repayment, and eventually a bankruptcy court doled out $17 million in mechanics liens, all of which had priority over the security interests of the lender. The unfinished development was sold for $10 million and other creditors settled, so BB Syndication was left with $150,000 of its $61 million claim.

In Judge Syke’s ruling, she states, “At the first sign of trouble, BB Syndication could have used the threat of default to force the developer to supply additional funds. If Trilogy was unwilling or unable to do so, BB Syndication’s losses would have been less than $5 million—and most likely zero—since the land alone was worth roughly $12 million.”

Judge Sykes pointed to an exclusion in the title policy for liens “created, suffered, assumed or agreed to” by the insured lender. In short, since BB Syndication cut off the loan, the lender created the liens, which the title policy excluded from coverage.

Though it would seem that because the judge cites the exclusion construction lenders could potentially avoid troubles like this by drafting a better contract, that may not be the case.

“I don’t know how you make a better written document,” Mr. Goodman said. “Telling a client to be diligent in identifying problems like this as soon as possible doesn’t really go into loan documents. It goes into training.”

As for future measures to prevent an incident such as this, the case sets a standard.

“The lenders have to be aware that title insurance is not going to be a safety net for this particular risk and that they have to cover that risk with other means,” Mr. Slawinski said. “This case is very significant because it is certainly the most recent decision of a federal appeals court to address this issue, and it is certainly going to be cited in any subsequent cases in the near future.”

BB Syndication and their legal representatives from Tennessee-based Manier & Herod did not reply to inquiries by time of publication.