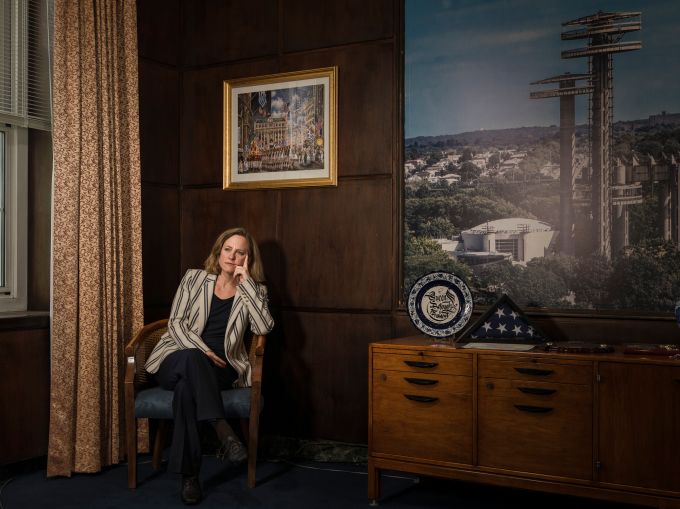 A successful borough president knows how to rile up a cheering section.

The master of this was Brooklyn’s Marty Markowitz. He was born with Nathan’s frankfurters dangling out of his cuffs, and Junior’s cheesecake on his breath. He radiated unadulterated love for all things Brooklyn—from the Nets, to the Cyclones, to the Atlantic Antic. And he presided over Brooklyn during a period when it was easy to be a cheerleader for Kings County. The borough was poised for a once-in-a-generation boon, and Mr. Markowitz was its most well-known mascot.

Melinda Katz, the Queens borough president, finds herself in a similar situation, albeit slightly to the northeast. If Brooklyn was ready for its close-up 10 years ago, the cameras are focusing on Queens now. It has the same undervalued housing stock that Brooklyn once had; it offers the same proximity to Manhattan; and it offers the New York Mets over the Cyclones. But unlike Mr. Markowitz, who seemed to be all about the Brooklyn cheer, Ms. Katz treats her job with a little more bite.

When Astoria Cove, the mega-development being built by an Alma Realty Corp-led team that will provide 1,700 apartments (20 percent of them affordable), as well as an elementary school, a 25,000-square-foot supermarket, a new waterfront esplanade and expanded parking, came before the Uniform Land Use Review Procedure (ULURP), she recommended against it.

She thought the developers could do better than 20 percent on the affordable housing component.

“I think my overall job is to create economic development and create tourism,” Ms. Katz, 50, said. “And the reason why I think we are so popular is because we are a borough of families. We are a borough that folks fight their whole lives to come to. And so that requires an infrastructure for families, too, but that’s not preclusive of one another.”

She called for the developers to build 35 percent of the units as affordable to accommodate more middle-income families. Also, she demanded ferry service to be added to the project as the nearest subway is about a mile away.

After long negotiations with the city council, developers agreed to reserve 27 percent of the project for affordable housing. Also, a $5 million ferry dock is being built.

But Ms. Katz’s involvement in the neighborhood revitalization didn’t stop there. She allocated $1 million (and Astoria council member Costa Constantinides added an additional $1 million) for an eco-dock and center on the peninsula that would provide educational programing for local students about marine life and environmental sustainability. And then she allocated another $1 million to redo the existing Hallets Point Playground near the 1,102-unit Astoria Houses, a New York City Housing Authority development on the peninsula.

Waving the banner of Queens is somewhat personal to Ms. Katz. A native of Forest Hills, who took the seat at Queens Borough Hall in Kew Gardens nearly two years ago following a landslide victory, she is also one of its most connected daughters.

Her father, David, was a well-known conductor who founded the Queens Symphony Orchestra in 1953, and her mother, Jeanne Dale, was a singer who created the Queens Council on the Arts in 1966. (In a nod to her musical family Katz has been known to sing “God Bless America” at events.)

“Me being borough president is sort of a culmination of their careers,” Ms. Katz said.

Even as the borough president, Ms. Katz still lives in the same house in which she grew up with her two young children, Hunter, 4, and Carter, 7 (both fathered by radio talk show host and Guardian Angels founder Curtis Sliwa), about a mile and a half from Borough Hall.

Ms. Katz graduated from the University of Massachusetts Amherst and earned a law degree from St. John’s University (a 10-minute drive from Borough Hall) and was a politician for two decades with time in the New York State Assembly and then the city council, where she chaired the land use committee.

In interviews, Ms. Katz is prone to repeat that Queens is the “most diverse county” in the United States. She will tell you there are more than 130 languages spoken throughout the borough, with 120 countries represented. This is why Ms. Katz branded Queens “The World’s Borough” last year, and partly why travel guide Lonely Planet named Queens the number one destination in the United States this year.

And her Queens boosting goes deeper than merely the latest magazine article—Ms. Katz co-chaired the World’s Fair Anniversary Committee, which oversaw a series of events over a six-month period last year commemorating the 75th and 50th (together) anniversaries of the 1939 and 1964 World’s Fair events at Flushing Meadows Corona Park. It brought thousands of families to the park, and an estimated 60,000 people showed up just for the May 18, 2014 World’s Fair Anniversary Festival.

‘But it’s up to the borough presidents to make sure that their districts get enough attention. I do think that Melinda keeps them on their toes.’—Rob MacKay

The success of the event led to another World’s Fair celebration in the park this June, which, coupled with her 16 free “Katz Concert” events, made for a summer packed with programming.

Another family event that Ms. Katz was involved in was the reopening of the New York State Pavilion, an extraterrestrial-like relic of the 1964 World’s Fair, which brought an estimated 5,000 people to see inside it for the first time in decades last year. (The movie “Men in Black” made a fairly convincing case that the pavilion was, in fact, extraterrestrial.)

The pavilion faced demolition last year before Ms. Katz and local advocates fought for it. She has led the charge to raise funds to paint, renovate and relight the structure, because of its historical relevance. It is also expected to help tourism, which is another industry that has been growing during her tenure.

Ms. Katz has been on the frontlines in a battle for more attention for Queens from NYC & Company, the organization that markets New York City (where Mr. Markowitz is a vice president).

“I understand that Manhattan gets most of the money and that’s reasonable. People don’t come from Stockholm, Sweden to check out the Applebee’s on Jamaica Avenue,” said Rob MacKay, the tourism director of the Queens Economic Development Corporation. “But it’s up to the borough presidents to make sure that their districts get enough attention. I do think that Melinda keeps them on their toes.”

A key area for tourism growth in the borough is Long Island City, due to its proximity to Manhattan.

In 2008, there were just five hotels in the neighborhood and now there are 26, according to 2015 data from the LIC Partnership, a local business advocacy group. The 17-story, 183-key Hilton Garden Inn located at 29-21 41st Avenue opened in April. And the 108-key Boro Hotel opened in the summer, becoming number 26. And 25 more hotels are in the pipeline in just LIC. Ms. Katz is working with local leaders to make sure the enormous growth helps provide locals with jobs.

“Hotels are good to a large extent, because if we are building hotels it means that people actually are coming here,” Ms. Katz said. “Part of what we want to make sure is as new businesses open up, including the hotels, that they are actually hiring from the community.”

Ms. Katz is on Gov. Andrew Cuomo’s seven-member airport master plan advisory panel, which is overseeing the biggest transportation project in the borough and arguably the city, in the redesign of John F. Kennedy and LaGuardia airports. While much has yet to be completed with those plans, the redesigns include a 505-key, $265 million hotel at JFK constructed and managed by a partnership of MCR Development and JetBlue. The airport redesign is a topic, which concerns Ms. Katz as much as it excites her, because of complaints of airport noise and pollution from neighbors and activists living nearby.

“If we are going to be a borough of families and raise kids here you have to be able to sleep at night, and send your kids to school without closing the windows because of the airport noise,” Ms. Katz said.

Development is all over. A 70-story building on top of a Long Island City clocktower is on the drawing board. Development in Queens has even reached the once-written-off Jamaica. Local activists led by nonprofit Greater Jamaica Development Corporation and city agencies started the process of extending subway service down Archer Avenue, creating the JFK AirTrain station in 2002 and then six years later offering a massive rezoning plan of its commercial corridor area to encourage larger mixed-use development.

Now as a transportation hub of numerous buses, subway lines, LIRR service and the JFK AirTrain, developers are venturing into Jamaica for the first time in decades. Numerous hotels, commercial and housing projects are planned for the area. Those include Able Management Group’s 27-story, 225-room Hilton Garden Inn at 93-47 Sutphin Boulevard and BRP Companies’ 26-story, 580 mixed-income housing project, The Crossing at Jamaica Station, near the JFK AirTrain. About 100,000 square feet spanning the first three levels of the BRP project will be dedicated to local and national retailers.

“She has been supportive of what we are trying to do,” Meredith Marshall, the co-founder of BRP, said. “Our plan sort of was announced right when Melinda was taking office so we worked with the prior administration. We had to present our plan to her and she was very receptive.”

Ms. Katz and Deputy Mayor Alicia Glen worked with leaders of the community to build a 21-step initiative called the Jamaica Now Action Plan, to promote and beautify the neighborhood. Following nine months and more than 30 meetings with local leaders and community members, the completed plan will bring $153 million to the neighborhood in the form of renovated green spaces and streetscapes, jobs creation systems, support of the arts and programming, marketing of the neighborhood and services for local businesses. It’s a plan that many say will be the final push in revitalizing the community, leading to further growth.

“With the Jamaica Now Action Plan it creates an agenda for certain portions of the community, and we are marketing [Jamaica] so coupled with that I think it will be a winning combination,” Mr. Marshall said.

He added, “Jamaica doesn’t have the buzz yet, but I believe once our building goes up along with those hotels the buzz will come.”

Further south from Jamaica is Rockaway, which has particularly benefited from the borough’s growth because of its beaches. But even there, a bone of contention has been limited ferry service to Manhattan.

“[Ms. Katz] has been a big advocate throughout the borough, but certainly with the Rockaway ferry,” said State Senator Joe Addabbo, who represents the neighborhood. “She was with me in the city council when we voted for the initial ferry pilot program in one of the city’s worst fiscal situations on the heels of 9/11.”

As a councilwoman she voted for allocating money in 2002 for a ferry to Rockaway. And again during her run for the borough presidency, she campaigned partially on permanent Rockaway ferry service, which was implemented after Superstorm Sandy for a short pilot period to help provide additional transit options to the area.

“With the ferry, not only will retail come but housing, because people now can live there and work in Manhattan,” Ms. Katz said. “Right now if you live in the Rockaways and you work in Manhattan you’re spending an hour and a half commuting every day.”

Rockaway ferry service will be relaunched as part of the city East River Ferry network in 2017.

“If you have families here, you need jobs, you need hotels for your families to visit, you need to create the work so it doesn’t cost you an arm and a leg to get to your job,” Ms. Katz said. “People are moving here in record numbers in order to raise their kids. They are trusting their entire family to this borough and there is a responsibility that comes with that. And I think we are living up to it.”