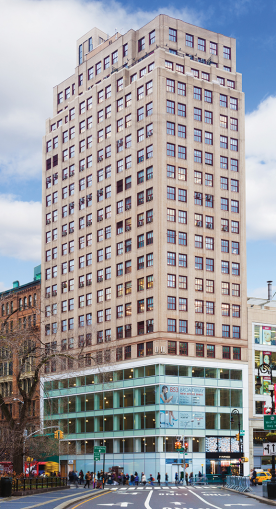 Berkshire Hathaway’s massive carpet manufacturer has inked a deal for a showroom at 853 Broadway in Union Square, according to the landlord.

Shaw Industries will take 7,963 square feet on the third floor of the Feil Organization’s 21-floor building at the corner of East 14th Street. The lease is for 10 years, and the asking rent was $90 per square foot.

“The striking visibility, combined with an exceptional view of Union Square as well as the building’s easy access to public transportation, made it the perfect location for Shaw,”  said the Feil’s Robert Fisher, who represented the landlord in-house, in prepared remarks.

Nicholas Weld and Michael Affronti of CBRE represented Shaw Industries in the deal.

Shaw Industries, which is headquartered in Georgia, is taking one of three floors that Feil has recently renovated. The landlord has installed new glass curtain walls on the lower floors of the 212,000-square-foot building, as Commercial Observer reported last year. Cosmetic retailer MAC was also signed on as a retail tenant at the ground floor. The lobby has been spruced up as well, according to the landlord.

“This is the first of what we know will be many leases at the building since the renovation. It is proof positive that our investment in the property has, and will continue, to pay dividends in the long term,” Mr. Fisher said. “We welcome Shaw Industries to 853 Broadway and look forward to the opening of their state-of-the-art showroom.”