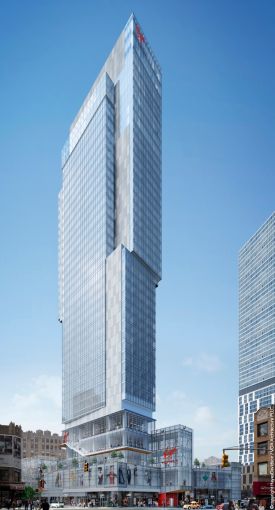 Architecture firm VOA Associates has designed the steel and glass tower, which is expected to open in 2018, according to a news release. A VOA spokeswoman declined to indicate the cost of construction.

The 500,000-square-foot hotel will include 30,000 square feet of space for amenities such as a banquet hall, meeting spaces, conference rooms, open workspace, restaurants, a rooftop skybar, and a pool and spa.

”The Virgin Hotel New York’s distinctive look is sure to play a key role in the NoMad neighborhood’s transformation process,” Len Cerame, a managing principal of VOA Associates, said in the release.

Lam Group, the Manhattan-based developer also behind the transformation of the Victoria Theater in Harlem into a 28-story hotel, bought 1227 Broadway, 1225 Broadway and 1205 Broadway, across from the trendy Ace Hotel for $88 million in 2011 and 2012, as Commercial Observer previously reported.  A spokeswoman for Lam Group did not immediately return requests for comment.

The Virgin Hotel location will have 90,000 square feet of retail at the base of the tower, which is being marketed by Newmark Grubb Knight Frank’s Mitch Friedel, Adam Weinblatt and Reed Zukerman.