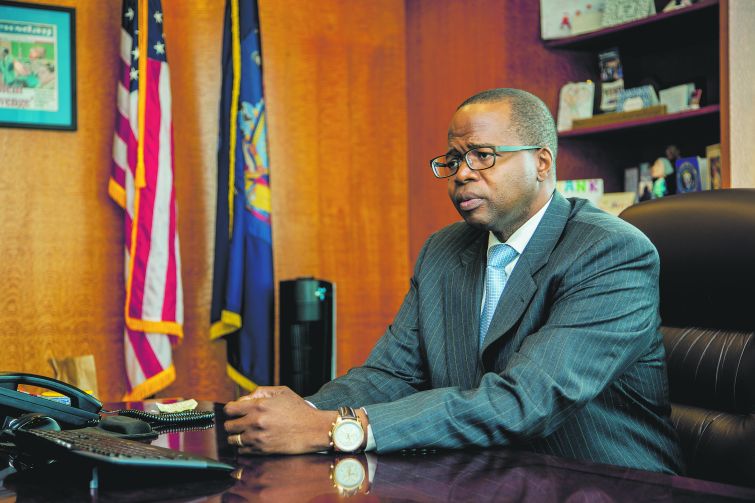 There are times when justice needs to put aside the talk and deliver a clean, swift blow to a crook—and in April, Kenneth P. Thompson, the Brooklyn District Attorney, found what he believed to be two worthy malefactors.

He doled out indictments to Aaron and Joel Israel, two brothers who had been hounding their rent-stabilized tenants at four of their buildings in Bushwick, Greenpoint and Williamsburg.

In the case of one of the Israel brothers’ tenants—Silveria Hormiga—she left her home at 324 Central Avenue in February 2014 for a doctor’s appointment and returned a few hours later to find her apartment practically destroyed in her absence. And at 98 Linden Street, families were left without utilities for about 17 months because the landlords had cut up the kitchen floor and destroyed the bathrooms—forcing them to use a nearby McDonald’s, according to prosecutors.  The brothers are due back in court Oct. 7. (Kevin Keating, the lawyer for Joel Israel, did not return a request for comment and John Carman, the lawyer for Aaron Israel, declined to comment.)

The Israel brothers’ scheme, according to the April indictment, alleges that they wanted tenants out to renovate the apartments and bring them up to market values.

“There is development all over Brooklyn,” the 49-year-old Mr. Thompson told Commercial Observer from his 19th-floor office overlooking Downtown Brooklyn. “And that’s good for Brooklyn, and for the city. But we can’t let any landlord literally go into their tenant’s apartment, under the guise of making renovations and needed repairs, and rip up their bathrooms, their kitchens to the point where folks have to leave and have no choice but to go into a homeless shelter, or to seek shelter from a relative. That’s not what Brooklyn should be about.”

Kings County is becoming one of the hottest and most expensive places to live. So, as Mr. Thompson juggles investigating past wrongful convictions, addressing problems in the criminal justice system and keeping Brooklyn safe, he’s also targeting landlords suspected of abusing tenants and contractors accused of scamming their workers.

The case against the Israel brothers clearly set off something with Mr. Thompson’s office, making it more proactive in searching out landlords attempting to push out tenants who pay below market rate. His office has a real estate fraud bureau dealing with faulty deeds and mortgages, which was in place before his term began in January 2014, and is coordinating with city agencies such as the Department of Housing, Preservation and Development, the Department of Finance and the Department of Buildings.

The district attorney’s office normally receives referrals on cases in which the landlord might, for example, have filed false construction permits that say a building is empty when people are still living inside (the Israel brothers are also accused of doing this at their buildings). Investigators will search if there’s enough to build a criminal case against the landlord.

“We are actively investigating a number of cases with other partners in government,” he said. “The role that we’re playing here in Brooklyn is [that] we’ll partner with whoever we need to in order to get the job done.”

The issue is not a peripheral one for Mr. Thompson. “We all should be able to enjoy Brooklyn,” he said. “We’ve seen the best of Brooklyn, and sometimes the worst of Brooklyn. I don’t think at this point, when Brooklyn is changing so quickly, that people should be forced out through criminal acts. So I intend to do something about it.”

Debbie Medina, the director of the housing resources department at Los Sures, said her community organization had been leading rallies outside of 98 Linden Street against the landlords. She said Mr. Thompson’s indictment “made a very big statement to other landlords who are very abusive” and was great for the sake of the tenants.

“I think his work is awesome,” Ms. Medina said. “I believe landlords are going to really reconsider going out there and harassing [tenants] in a criminal way.”

Of course, the real estate business is not the only area where Mr. Thompson has made waves in the 20 months since he took office: He’s overturned some wrongful high-profile convictions. Last July, he announced his office wouldn’t prosecute arrests for small amounts of marijuana. But he’s also demonstrated the zeal of an enforcer of the law—a few hours before Mr. Thompson sat down with CO, his office announced the sentencing of a gun trafficker who was bringing firearms up from Georgia to 18 years in prison.

Mr. Thompson grew up in the massive Co-op City complex in the Baychester area of the Bronx the son of a cop—his mother was one of the first female New York City police officers to go out on patrol more than 40 years ago. Now the married father of two, living in the Clinton Hill section of Brooklyn (he’s also a Nets season ticket holder), Mr. Thompson said his mother instilled the idea of public service and helping those in need. Since graduating from New York University Law School in 1992, he’s worked several jobs in government that include tours with the U.S. Attorney’s office and the U.S. Department of Treasury, as well as in private practice.

‘I don’t think at this point, when Brooklyn is changing so quickly, that people should be forced out [of their homes] through criminal acts. So I intend to do something about it.’—Kenneth Thompson

To look at the stats, Mr. Thompson was well suited to the job he wound up in. Crime has been dipping in Brooklyn, even during a time when many communities are becoming wary of police and murder rates have been climbing in big cities. As of Aug. 16, there were 9,762 arrests this year, down 8.1 percent from the same time last year in Brooklyn North, which includes the precincts covering posh areas such as Greenpoint, down to Bedford-Stuyvesant and Downtown Brooklyn. Arrests in Brooklyn South, which covers the lower swath of the borough, dropped 7.8 percent to 9,762 from the same time last year, according to NYPD data.

“[A low crime rate is] the most important thing,” said Tucker Reed, the president of the Downtown Brooklyn Partnership, who said Mr. Thompson has been successful at balancing fairness with safety. “There is no market without it.”

The business community has been receptive to Mr. Thompson, and impressed by his willingness to reach out, said Carlo Scissura, the president of the Brooklyn Chamber of Commerce. Mr. Thompson first reached out to the chamber after winning his primary in 2013 to find out the needs of the business community, he added, and wound up giving one of his first major speeches as district attorney at a chamber breakfast.

“He is looking at being the D.A. in a way where it’s grassroots, it’s understanding communities,” Mr. Scissura said. “He wants Brooklyn to have no crime. This is a man who believes that this borough can be fair to people.”

Mr. Thompson said he opted to challenge longtime District Attorney Charles Hynes in 2013 because the office had lost its way when it came to due process. He defeated the six-term lawman in a September 2013 primary—which in New York City typically guarantees a victory—by 19,505 votes. But, in what Mr. Thompson describes as “only in Brooklyn,” Mr. Hynes secured the Republican Party’s backing and the borough had a general election on its hands.

“It was frustrating in a sense, because I had won the primary fairly and was looking forward to assembling a great team to bring to the office,” he said. “And I had to run again.”

His general election victory was by a much larger margin. The final tally was 235,666 to 79,958 votes—making Mr. Thompson the first African-American district attorney in Kings County. (In his interview with CO, Mr. Thompson didn’t use the name “Charles Hynes,” rather saying, “the previous administration,” the way a Roman Catholic Priest might reference Martin Luther.) Mr. Hynes wasn’t reachable for a comment.

One might think it takes a certain amount of chutzpah to challenge a storied prosecutor like Mr. Hynes—but Mr. Thompson’s track record spoke of a willingness to fight. While working under then-U.S. Attorney Loretta Lynch (you might know her now as the U.S. attorney general) in 1999, Mr. Thompson successfully got NYPD Officer Justin Volpe to plead guilty and officer Charles Schwarz convicted of sodomizing Haitian immigrant Abner Louima in the 70th Precinct station house in 1997.

In private practice, Mr. Thompson represented hotel housekeeper Nafissatou Diallo, who said in 2011 she was sexually assaulted by Dominique Strauss-Kahn, then-chair of the International Monetary Fund. She filed a civil suit against Mr. Strauss-Kahn, which was settled in December 2012. Mr. Thompson created a stir when he set up camp outside the Manhattan D.A.’s office and held a press conference, forcing Cyrus Vance, Jr. to respond with his own counter-conference

Mr. Thompson was drawn back to public service two years ago in a crusade to defend the little guy and the everyman. It’s something he said he picked up from his mother, the police officer who spent 21 years on the force.

As a private lawyer, he was able to only do so much against bosses who were not good to their employees. But from his new perch as Brooklyn’s top law official, Mr. Thompson said he could finally make a change to how employers treat their workers.

“I think the vast majority of employers in Brooklyn are honest and fair,” he said. “But unfortunately there are some who exploit their employees, who steal their wages, who put them in dangerous working conditions.”

Mr. Thompson said his office has been investigating a number of complaints against employers who might be mistreating workers, including how they are paid. In June, Brooklyn-based contractor William Dorvillier pleaded guilty to scamming 11 workers out of pay over a four-year period for work on brownstones and small-house conversions in the borough. In total, Mr. Dorvillier was ordered to pay back $67,220 worth of wages.

Often times, those exploited workers have been immigrants or undocumented workers who might be afraid to report their cases to law enforcement, he said. Sometimes they won’t get paid, and other times they might be put in hazardous conditions.

“We’ve already started to bring some cases against employers who have to be held accountable,” he said. “Whether you were born in this country or you come from another country, I don’t think you should be ripped off because of your immigration status.”

Mr. Scissura agreed the district attorney’s office should take action against those not giving a day’s pay that equals a day’s work. “Not everybody is 100 percent honest,” he said. “He’s really looking across the board at what is happening across the borough. He is poised for really some great stuff.”

From a development standpoint, Mr. Thompson believes builders should help those who have paid their debt to society by hiring people leaving the criminal justice system. His argument is that it would help people trying to rebuild their lives find honest, steady work.

When asked if developers were amenable to the idea of hiring people getting out of prison, Mr. Thompson responded with a wavering “yes,” adding “they should consider that they would have a great reception in Brooklyn if they were allowing folks to get those jobs.”