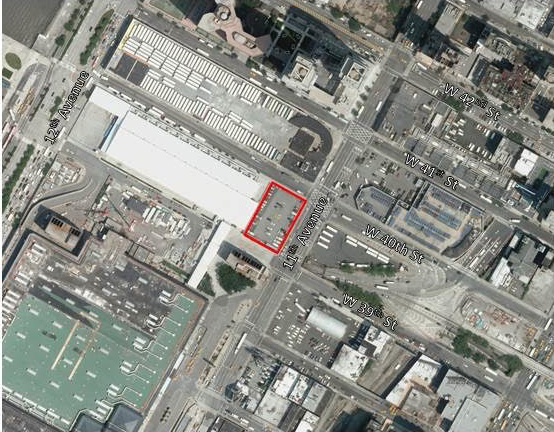 The city is is collecting proposals for a mixed-use development with 100 percent affordable housing on the site of a former slaughterhouse in Hell’s Kitchen.

New York City Economic Development Corporation and the Department of Housing Preservation and Development announced a request for proposals today for the development of the city-owned site at 495 11th Avenue between West 39th and West 40th Streets near the Hudson Yards.

The property is 24,687 square feet and was once home to New York Butcher’s Dressed Meat Company, which operated a slaughterhouse at the site. Currently the city is using it as a surface parking lot for the New York Police Department.

“This site gives us an opportunity to strengthen the Hell’s Kitchen neighborhood with a fully affordable development, and we must work together with the community to seize that opportunity,” Manhattan Borough President Gale Brewer said in prepared remarks. “If we do it the right way, the slaughterhouse site can become a shining example of how mixed-use development with permanent, fully affordable housing can be achieved for years to come.”

The project is part of Mayor Bill de Blasio’s plan to build or preserve 200,000 affordable housing units until 2024. A mix of commercial or community facility uses are expected to be incorporated into the project.

New York Butcher’s Dressed Meat Company’s slaughterhouse, which was constructed in 1905 at 495 11th Avenue, was discontinued in the 1950s, and the city took the title for it in 1975 after the owner stopped paying taxes on the property. The building was used as a warehouse and office through the 1970s, but it was demolished following an unsuccessful effort to landmark it in 1988. Since there were no plans to develop it in the late 90s, the city transformed it into a parking lot for the NYPD.

“Today’s release of an RFP for a mixed-use development prioritizing affordable housing will help Hell’s Kitchen remain a diverse and vibrant community for everyone,” Assemblyman Richard Gottfried said. “In a twist on the old lyrics, New York City is razing a parking lot and putting up not quite paradise but at least sensible development—and that’s great news for everyone.”