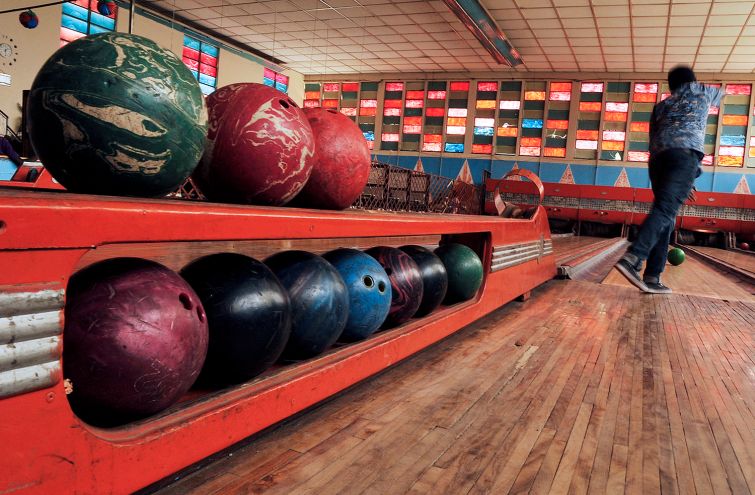 Strike while hot: Bowling alleys require a lot of space and equipment, which worries some investors, who fear they can’t be easily redone in the event that the business goes bust (Photo: Jenny Vaughn/Getty Images).

When you’re bowling for dollars, it’s tough to stay out of the gutter.

Over the last few decades, the once go-to family sport and bowling league scene began to fade, and less than a handful of companies started to transform the greasy-food and shoe-sanitizer havens into family entertainment centers, or more upscale, nightlife-centered destinations.

As companies like Bowlmor AMF seized the spotlight, those who feared that bowling would become a literal pastime were somewhat allayed. Even in Times Square, where tenants pay some of the highest rents in the world, a Bowlmor proved it could survive. (Jeffrey Lebowski might not like the look of it, but at least he’d have a place to roll.)

But the reality is that bowling conglomerates only comprise a small fraction of what are mostly independently owned businesses, and owners and operators across the bowling center spectrum are still battling the single-purpose stigma attached to their properties.

“It’s less about the risk of default,” Huxley Somerville, the managing director and head of the U.S. CMBS group at Fitch Ratings, told Commercial Observer. “If the business is successful, there could be too much value placed on the operating business itself and not on the real estate, so you can over-leverage loans. If the operating business does fail, you will have much more debt on the property compared to a similar property or what the property’s alternative uses might be.”

The risk is not exclusive to bowling centers, but inherent in any operating business, Mr. Somerville added.

“What really drove the deal was that iStar already owned 77 bowling centers for a number of years, even throughout the downturn,” said Kellogg Gaines, a managing director at JLL who worked on the transaction. “They’re a real believer in where the business is going.”

He also noted that iStar’s recently purchased portfolio was acquired at an 8 percent cap rate, which equates to nearly $16 million in rent from its properties. The 58 bowling alley portfolio, which stretches across 15 states and Ontario, Canada, has properties located near Atlanta, Los Angeles, Chicago and Denver.

“The fact that it was a portfolio of bowling alleys was the hardest thing to get over,” he added. “When you look to the operations of each property, it made a lot of sense from a securitization basis.”

While the portfolio may show strong financials, Moody’s Investors Service, the rating agency that rated the deal, pointed to the properties’ specialty use as a concern.

“Bowling centers are a highly specialized asset class often located in secondary or tertiary trade areas which would not support valuable alternative uses,” the agency’s pre-sale report stated, also making note of the high costs related to repurpose a bowling center because of the removal and disposal of bowling equipment.

However, CMBS players that CO spoke to noted that bowling centers—or portfolios of them—are not typically found in securitizations. And again, bowling center chains are not representative of the entire business.

Mr. Hansell and his team have sold over 500 bowling centers across the country since the firm’s inception in 1977. The team also buys and valuates bowling centers, and has worked with some of the bigger names in the industry, including Brunswick Corporation and AMF Bowling Centers.

There were just under 4,000 bowling centers across the country in 2013, according to the most recent data from the U.S. Census Bureau. Mr. Hansell has a slightly higher estimate of today’s numbers: 4,300. Of that total, he estimates that roughly 500 of them are chain-owned, meaning the other 3,800 are independently-owned.

He said that the business is doing well now, and pegged 2009 to 2013 as the industry’s tough time, during which about 300 to 400 centers were lost as they failed to produce enough revenue.

“The biggest challenge we have in bowling right now, from the standpoint of operating, is getting customers out of the house to come to a location-based recreation spot,” Mr. Hansell explained. “The secondary problem is how to make bowling attractive to millennials, and the way the industry is going, we’re attacking that problem.”

As bowling leagues began to wane in popularity, some center operators did not see the benefit of trying to bring in more casual bowlers, and others took a risk by making changes to their business model, said John Roush, the vice president of new center development at Brunswick.

The owners and operators that did change their business model diversified their revenue streams by adding restaurants, bars, karaoke rooms, arcades and even movie theaters to attract new customers, Mr. Roush said.

Although the beloved and original Bowlmor Lanes, which was located at 110 University Place for 76 years, closed in July 2014, the game is still making a come back in New York City. Within the last few years alone, Lucky Strike opened in Hell’s Kitchen, and Frames Bowling Lounge in Port Authority of New York & New Jersey has made itself a nightlife destination. Most recently, Splitsville Luxury Lanes signed a lease at Essex Crossing.

While Brunswick no longer owns bowling centers, they have been active in the creation of more. Last year, the company built 40 new facilities, and expects similar numbers this year—most of which are in the 40,000- to 50,000-square-foot range with anywhere from 24 to 48 lanes, Mr. Roush said.

“These are typically $10 million to $15 million projects, and on the upper end, even more than that. It’s a huge capital investment,” he said, noting that much of the financing for these projects comes from smaller, local banks. “The traditional bowling centers that banks financed in the past may not have been attractive from a revenue standpoint. Now, our revenue streams are pretty significant.”

The bowling center world largely relies on local financing as opposed to financing from one or two larger national institutions, he said, but many banks are unfamiliar with the new types of revenue streams and there is currently no reporting mechanism to fill in the communication gap.

Many local banks struggle to understand the bowling center business model, in part because those banks do not have very many of the operators in their client portfolio, and because they are unfamiliar with the financial statements that bowling center operators put together, said Kurt Harz, the former vice president of sales at Brunswick. Mr. Harz, now retired, is doing consulting work at Live Oak Bank, a Wilmington, N.C.-based small business lender that has a specialty in the family entertainment center space.

“In totality, you have a customer that is trying to reach out for someone to help direct and guide them from a financial perspective, including the borrowing of money and the changing of the model,” Mr. Harz said. “It gets to be very muddy across the industry, and I see it time and time again.”

Of the loans that bowling center owners and operators do get done, the terms are not always the most flexible. For instance, when refinancing a property, the borrower typically wants to lock in a longer term, and not suffer a penalty for refinancing if the market changes, he explained.

“If you do a long-term financing, you will want the ability to refinance that loan without penalty after three, four or five years,” Mr. Harz said. “What you don’t want is to be stuck with a loan that has a 5 percent interest rate when the market goes down and you could get a 2 percent interest rate.”

In addition, bowling centers are still widely seen as single-use buildings—a lot of lenders look at all the mechanical equipment built into the property, with its attendant costs to remove and blanch. The bowling community acknowledges the price tag associated with a conversion, but does not see it as an impossible hurdle. Mr. Harz even said that he used to carry a list of bowling centers that were converted into other businesses around with him every day.

Mr. Hansell still has a similar list (which he provided to CO) of 132 bowling centers that were converted into other types of businesses, including restaurants, movie theaters, offices, furniture stores, gyms, mini-malls—and even car dealerships, storage facilities and, in one instance, a post office.

Some of those business models, however, have been hurting over the last few years.

“Post offices and big-box retailers are spaces whose tenants have been in flux for the past few years,” Sean Barrie, an analyst with New York-based data firm Trepp, said. “Downsizing has forced some of these spaces to adapt, so penciling them in as potential changeovers for bowling alleys could be more of a saturation than a revitalization.”

In other words, converting bowling centers into businesses that are just as risky would not solve the problem.

Mr. Roush noted that of the more recent bowling centers he has built, some have replaced big-box retailers. Plank, a bowling, bocce and bar center in Oakland, Calif., for example, replaced a Barnes & Noble, and Splitsville, located at Downtown Disney in Lake Buena Vista, Fla., replaced a Virgin Megastore.

While there is no surefire answer, Mr. Harz pointed to a nuance: the risk can be mitigated or exacerbated by location, as well as by the size of the center.

“If I’m in Syracuse, N.Y., the likelihood that I can turn that box into something else is far greater than if I’m in Mandan, N.D., because Mandan has a smaller community,” he explained. But when operating in a smaller community, size really plays a factor.

“From the standpoint of converting buildings, if I have a 40-lane center that is 40,000 square feet, it will be much more difficult to market and sell as opposed to a 16,000-square-foot center, because a smaller building is more conducive to a smaller market,” he said.

While many bowling centers have closed over recent years, those in the industry remain optimistic.

“Many of the bowling proprietors are getting up in years,” Mr. Hansell said. “We’re seeing more young people buy centers because they see a future in the business and we’re seeing more new, young faces at the bowling conventions. I think the business has a bright future because as these young people come in and re-position traditional centers, they attract new customers.”