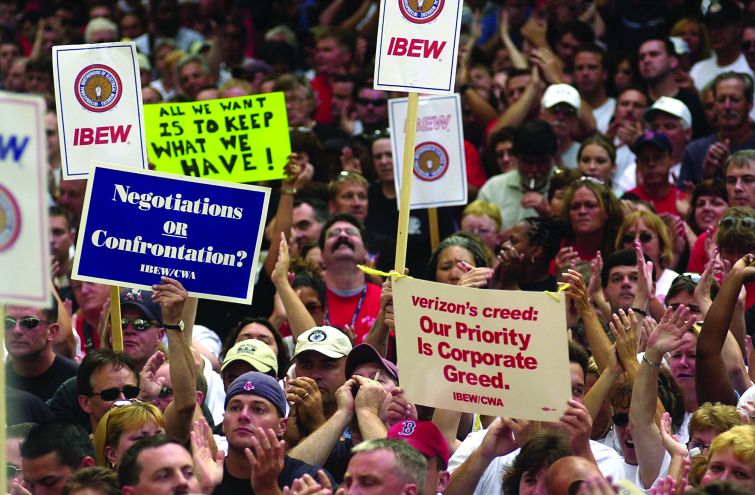 BOSTON - JULY 31: Verizon employees rally in Post Office Square on the steps of the Verizon building July 31, 2003 in Boston, Massachusetts. A strike looms for Verizon as the current contract for 80,000 members of the Communications Workers of America and the International Brotherhood of Electrical Workers expires August 2. (Photo by Douglas McFadd/Getty Images) mgross170

Verizon workers in New York City and across the region are working without a contract after a deadline for a strike passed this past weekend. Verizon-employed members of the Communications Workers of America voted to strike on Aug. 1 when the contract expired, but agreed to continue while negotiations last. Verizon is accused by the union of failing to provide lower-cost benefits and job security, and of not finishing FiOS installations (thus costing workers jobs) in the New York City area and in various regions across the country. The workers could strike any day if an agreement isn’t met.

Verizon workers also accuse the company of failing to install FiOS in lower-income areas, which costs jobs for the workers. “Our members are clear and they are determined. They reject management’s harsh concessionary demands, including the elimination of job security, sharp increases in workers’ health care costs and slashing retirement security. Verizon made $9.6 billion in profits in 2014, and reported $4.4 billion in profits just in the 2015 second quarter alone. Their demands are completely outrageous and unwarranted,” Dennis Trainor, vice president for CWA District One said in a statement.

At a July New York City rally, the CWA members employed by Verizon, along with members of other labor groups, voted to approve a strike. Despite the controversy, Verizon has continued to upgrade its infrastructure in the tri-state area and boost its FiOS Internet customer base. During the first quarter of 2015, Verizon added 133,000 new FiOS Internet customers. Total revenue for its FiOS Internet grew to $3.4 billion, up 10.2 percent from the same quarter in 2014. The New York-based telecommunications giant announced that its total infrastructure investments in New York and Connecticut involve a massive investment of $2.3 billion. The company also announced that has invested at least $1 billion per year to upgrade its systems in both states since 1995.