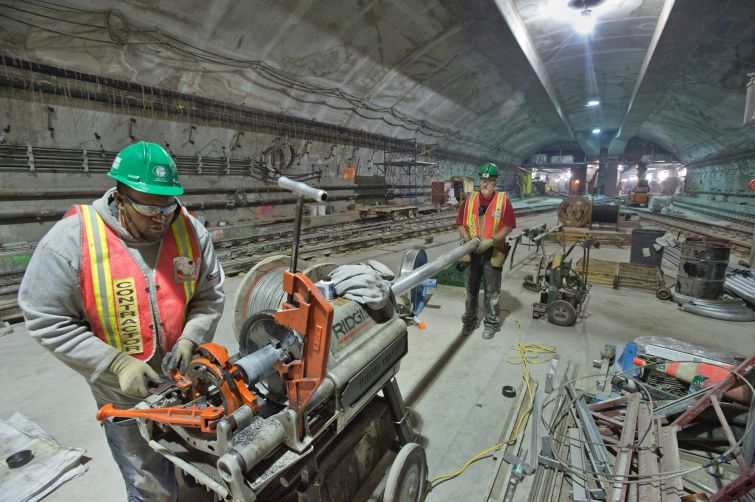 The new 7 Train station is slated to open on Sept. 13 in the Hudson Yards. (Photo: Courtesy Metropolitan Transportation Authority). tcullen2015

The 7 train was once dubbed the international express for linking the various demographics of Queens above Roosevelt Avenue and running through Midtown. Now, officials and developers are banking it’ll have the same success further into Manhattan.

After almost eight years of tunnel boring, platform building and elevator tinkering, the long-awaited 7 train extension to the Far West has an opening date of Sept. 13.

The $2.4 billion project, which was funded by the city, is expected to bring thousands of riders per day to the Hudson Yards district, according to the Metropolitan Transportation Authority. It sits about 100 feet below the surface with escalator rides taking two minutes in each direction, according to Michael Horodniceanu, the president of MTA Capital Construction.

The stop will become one of the busiest in the city and will stretch along 11th Avenue underground from the Jacob K. Javits Convention Center to the rail yards.

Massive development has been popping up between West 28th and West 42nd Streets, a significant amount of which is over the rail yard that houses Amtrak and Long Island Railroad trains.

The Related Companies is the prime builder, constructing 18 million square feet that includes five towers of both office and residential space. Brookfield Properties Partners has 7 million square feet of development and redevelopment planned in the area, including twin 2-million-square-foot office towers. Joseph Moinian is in pre-development on 3 Hudson Boulevard, which will sit atop one of the entrances to the 7 train station.

Completion of the station was crucial to spurring development on the Far West Side, Mr. Horodniceanu told Commercial Observer in a recent interview.

“In expectation that transit will come there, the developers started to buy land and development,” said Mr. Horodniceanu, who took over Capital Construction in 2008, about a year into the project. “Now they are seeing that we are there, they started to build.”

The MTA used two tunnel-boring machines to dig the tunnels that extend the line by a mile and a half from Times Square to the intersection of West 34th Street and 11th Avenue. The tube is lined with six segments of concrete that are 19 and a half feet in diameter.

The project was originally slated to finish in time for outgoing Mayor Michael Bloomberg to take the inaugural ride by the end of 2013.

But problems with the diagonally moving elevator, designed and built by Italian-based Maspero Elevatori, pushed the opening back by more than a year.

It continued to be delayed and in March 2015, the MTA announced at a board meeting that the opening would eventually be some time in the fall of this year, due to testing on the communication system and fire alarms, as The New York Times reported.