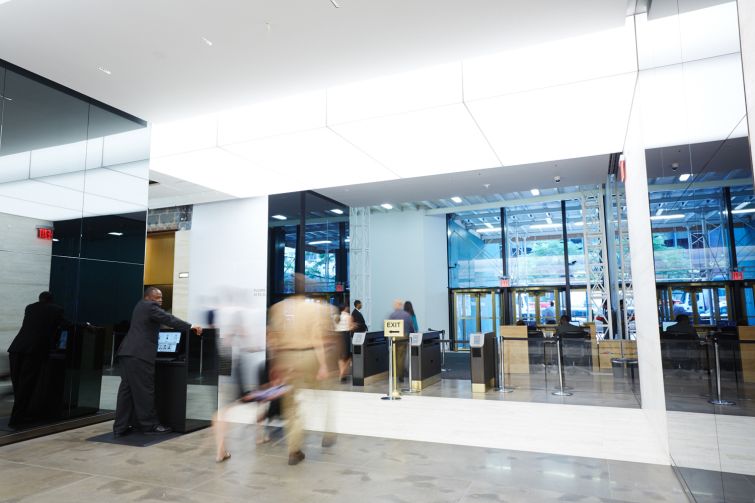 With several vacancies in its 1-million-square-foot office tower at 605 Third Avenue coming online in the next few years, the Fisher Brothers decided it was time to make a change for new tenants as well as the longtime occupants.

The company just finished the first leg of the lobby renovation. You’ll now be able to see the new black granite columns as you approach the building between East 39th and East 40th Streets.

“The first experience that the tenant will get is a much more open kind of lobby,” said Kenneth Fisher, one of the company’s partners. “We began the asset upgrade, if you will, by doing the lobby over, because that’s the first piece that tenants will experience.”

Gone are the sand colors of the old designs, which were done when Mikhail Gorbachev still oversaw most of Eastern Europe. Architect David Rockwell struck a balance between the existing design and something a bit more 21st century, Mr. Fisher said. The end result is a warm, gray limestone floor that runs in conjunction with the building’s elevator banks.

Once the front windows are pushed out, the lobby floor space will be 1,000 square feet larger to about 14,000 square feet. Mr. Fisher said the the landlord wanted tenants and visitors to be able to walk into a more open lobby.

Fisher Brothers is also switching up the concierge desk design to a circular style to stay symmetrical with the new layout.

“We didn’t want to rush it, but this [existing lobby] wasn’t keeping with the [companywide] redesign of Fisher Brothers,” Mr. Fisher said. “We wanted to be on the cutting edge in terms of design. We wanted to enhance it and bring it more modern.”

There are also matte ceilings that run into the elevators, which are getting their own upgrades later in the project and will run a bit quicker to keep tenants happy.

Speaking of technological upgrades, the lobby is getting a new security system as well as a cooling and heating system in the next few years, Mr. Fisher said.

A new art installation will feature two windows with LCD tiles that will turn the lobby into a giant kaleidoscope. Trippy? Maybe a bit, but Mr. Fisher said it’ll be a game changer in corporate building art.

“It’s something that will be more than just a novelty item,” he said, “I think it will be embraced by the market.”

“We don’t wait for things to age,” he said. “When it is possible and the circumstances are right we’ll get back in there and keep those properties above the rest.”