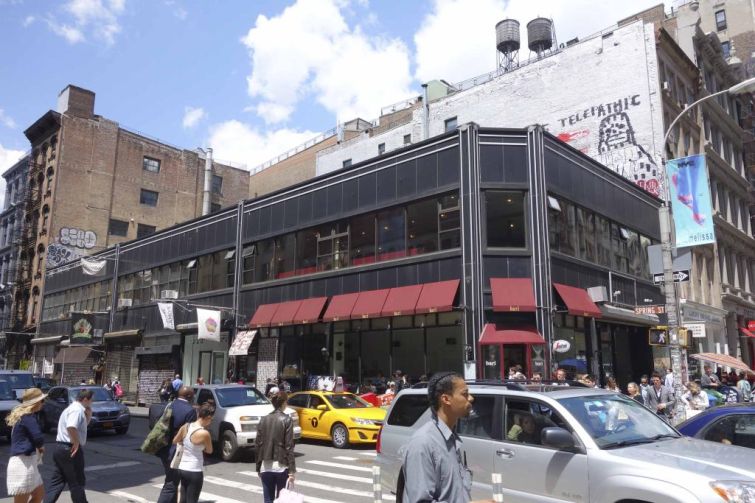 The owners of 529 Broadway have commanded $1,200 per square foot on the ground floor from Nike. Lauren Elkies Schram

While nobody would dispute the neighborhood is home to some of the finest retail in the world, it is nonetheless riddled with vacancies.

According to Lee & Associates NYC’s internal listings database this week, there were 96 stores that were either vacant or available for lease from Canal to Houston Street, and Thompson Street to Broadway.

“You’ve got a lot of space chasing not a lot of tenants,” said Peter Braus, a managing principal at Lee & Associates NYC.

The rents are higher than tenants can justify paying based on sales. And, unlike in residential co-ops, where the buildings need to fill a vacancy for the income, many of the landlords in Soho can afford to sit with their vacancies.

David Zar of Zar Property, which owns 90 Grand Street, 42 Greene Street, 50 Greene Street and 64 Wooster Street in Soho, said that while retailers might not be profitable in Soho, they still want to be there because the market is fueled by international and luxury tourism.

And as a result, he said: “Landlords in Soho are relatively patient and will wait to achieve their rent.”

In the Soho market, more than in other neighborhoods, there has been “a lot of speculative buying and the spec buyers are waiting to get the numbers that they want,” Mr. Braus said.

As one-time mayoral candidate Jimmy McMillan was known to say, the rent is too damn high.

“Everybody’s asking for too much money,” said a source who asked not to be identified. “Nobody wants to pay. It’s a very overrated market.”

A couple of big deals can lead landlords to hold out hope.

Prada set a record in Soho in 2013, when it renewed its ground-floor space at 575 Broadway at Prince Street at $1,025 per square foot.

More recently, Aurora Capital Associates, Wharton Properties, Thor Equities and A&H Acquisitions nabbed $1,200 a foot per square foot from Nike for the 52,500-square-foot under-development five-story retail space (of which less than 10,000 square feet is on the ground floor) at 529 Broadway at the corner of Spring Street, sources with intimate knowledge of the deal said. The total net price per year in rent is $16 million.

Jeff Sutton of Wharton Properties declined to comment—but Jared Epstein, a vice president and principal at Aurora Capital, said that while he had no comment on the deal, “corner spaces due to their scarcity and dramatic wraparound frontage and foot traffic…command a significant premium over inline spaces, especially when they are located adjacent to a major subway entrance and that’s the case with Broadway and Spring and Broadway and Prince.”

The prices that Prada and Nike paid are not the norm, however.

“I think the days of $1,000 a square foot are really not there anymore,” said C. Bradley Mendelson, a vice chairman at Cushman & Wakefield. “These $1,000-a-foot rents are for flagships. The smaller tenants can’t make enough money to pay the rent.”

Broadway, the highest trafficked street in Soho, has a great number of availabilities, whether the stores are vacant or not.

In reviewing what is on the market along Broadway yesterday, CO found that asking rents run the gamut.

Many of the spaces on the market have been available for a while, the unnamed source said.

“There are several reasons why vacancies are on the rise,” said John Brod, a partner at ABS Partners Real Estate. “You can start with the rents and the fact that they have peaked on Broadway, Prince and Spring Streets. Retailers just cannot justify $700 to $1,200 per square foot on those three streets. When the rental expense starts to seriously exceed 20 percent of sales there’s no reason to lease space.”

Mr. Brod is marketing Room & Board’s 40,000-square-foot location at 105 Wooster Street between Prince and Spring Streets at $225 per square foot. “Rents on Wooster are less of a factor and have not peaked the way those other streets have,” the broker noted, adding that Wooster Street asking rents are below $500 per square foot.

But there is just not that much movement in the retail sector in Soho.

“No one’s renting anything at any price,” the anonymous source noted.

But, if tenants weren’t willing to pay near these big prices at some point landlords would abandon asking sky-high rents, right?

Mr. Epstein is hopeful that RKF will be able to get at or near an asking price of $700 per square foot when in October the brokerage starts marketing Aurora Capital’s 7,950 square feet of retail space, 4,200 square feet of it at ground level, at 543 Broadway.

While Mr. Epstein noted that the slowdown in the number of executed leases is “due to the discrepancy between surging asking rents and flat retail sales volumes,” he said he believes there will be “a resurgence of consumer spending throughout New York City in the fall.”

Update: This story was edited to include the correct asking rent for Quiksilver’s three-story 19,200 square feet at 519 Broadway.