German Lenders Are Racing Back Into the U.S. Real Estate Market 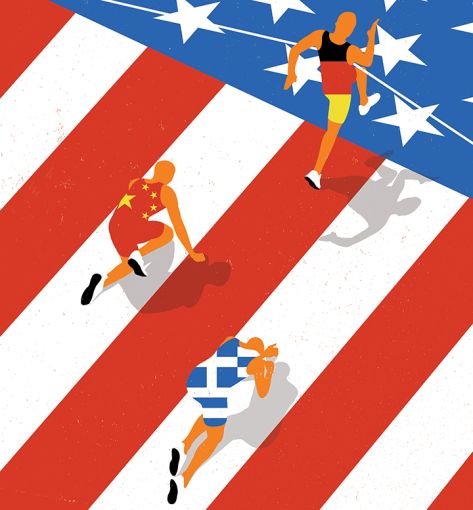 If you think New York’s summer has been hot, take a look across the ocean. Along with European temperatures reaching 100 degrees Fahrenheit, investors and lenders throughout the continent have been sweating over the economic turmoil there, which started in Greece.

Uncertainty over the country’s capacity to repay its debts has led to doubts about the future of the entire Eurozone, including increased talks of a potential breakup. Through all of this, Germans have become the most vocal opponents of Greece with Wolfgang Schäuble, Germany’s finance minister, going as far as to speak openly about a “Grexit”—Greece’s potential exit from the European Union.

As a result, German lenders unsure of the opportunities in troubled Europe have been looking, once again, at the United States.

“The more turmoil there is in the Eurozone, the more there will be continued interest in lending in the U.S.,” said Riaz Cassum, a senior managing director at HFF who co-leads the firm’s Global Capital Initiative group. “I think that all the issues going on in Europe will definitely translate to more interest for those banks to lend here.”

In 2014, four of the 10 foreign lenders that provided more than $1 billion each to the U.S. real estate market were based in Germany, according to data from Real Capital Analytics. Last year, German lenders closed a total of $15.2 billion in U.S. commercial real estate loans. The global baking giant Deutsche Bank, alone, provided $7.5 billion.

But even without Frankfurt-based Deutsche Bank’s contribution, German lenders remained the most active foreign lenders in the U.S. with roughly $7.7 billion in commercial real estate debt, more than the $6.6 billion closed by U.K. lenders and the $4.5 billion closed by Canadian lenders, the RCA data show.

In the years after the crisis, Germany’s presence in U.S. real estate finance gradually decreased, while other overseas lenders—especially those from Asia—emerged. Now, slowly but steadily, the trend has started to shift.

Germany’s return across the Atlantic brings with it a few bitter memories. German lenders Eurohypo, WestImmo and Hypo Real Estate Holding were among the most badly hurt by the 2008 financial crisis and, as a result, shut down their U.S. real estate lending practices.

Others who kept their books clean during the crisis have learned from the mistakes of their peers. When speaking with German lenders in 2015, the words “cautious” and “conservative” often come up.

“We stick to our guns,” said Anni Hönicke, global head of real estate lending at DekaBank, while speaking about increased competition to provide the best terms on deals. She made those remarks during an interview with Commercial Observer in the bank’s headquarters at Trianon Tower in Frankfurt’s financial district.

The deal is a clear sign of Germany’s strength in the global markets—both as a source of capital and as an investment opportunity—but German lenders, in particular, don’t get excited too easily.

“We are very focused and conservative, because we concentrate on very few markets and stabilized products,” said Ms. Hönicke, describing DekaBank’s lending strategy.

With such a measured approach, it shouldn’t come as a surprise that Germany’s return to the U.S. real estate market has gone unnoticed by so many. All the while, for German lenders in the U.S., there have been several highs and lows, and now an increasing number of returns.

From 2013 to 2014, Frankfurt-based Helaba grew its volume of U.S commercial real estate lending from $1.3 billion to $2.4 billion, becoming the fourth-largest foreign lender in the U.S. The bank declined to comment for this story.

In 2013, Allianz Real Estate of America, a subsidiary of Munich-based Allianz Real Estate Holding, closed about $255 million in mortgages for U.S. properties. Last year, that amount rose to $1.8 billion, more than the combined total of the previous four years, according to RCA.

“We had the largest percentage increase year-over-year among the insurance lenders in the U.S.,” said Christoph Donner, Allianz Real Estate of America’s chief executive officer. “It is a strategic focus that was put in place when [Allianz Real Estate Holding CEO] Olivier Piani set up the team a few years back and we continue on that path.”

The insurance company has a strategy more similar to that of its direct U.S. competitors rather than traditional German banks.

“We are predominately looking to originate long-term, fixed-rate loans, typical for the insurance business, with seven- to 15-year terms, on stabilized properties with good cash flow,” Mr. Donner said. “In terms of the market, it is truly a national approach. We are also active in secondary markets.”

The company’s deals revolve around multifamily, office and industrial, with the average loan size hovering around $50 million, he said. Those deals typically carry a loan-to-value ratio of 50 to 70 percent.

Allianz has plans to expand globally. Its European real estate lending business is expected to grow its €2.5 billion portfolio to up to €6 billion in the next few years. But the firm views the U.S. as a safe heaven for lending, given the most recent global instability. “Russia, Turkey, even Greece, Spain, Portugal were very attractive markets for European lenders and that obviously has changed,” Mr. Donner said.

Compared to many other German lenders, the company has a local advantage in the States, he noted.

“Investments done in the commercial real estate, either in equity or in debt, are done on behalf of individual Allianz subsidiaries which are often locally regulated insurance companies,” said Mr. Donner. “Minneapolis-based Allianz Life typically conducts business with U.S. clients and is looking to invest a portion of their money in U.S. loans,” he told Commercial Observer. “European lenders looking to provide debt in the U.S. usually need to hedge their euro money against the U.S. dollars.”

“Hedging costs” are making it difficult and expensive for German lenders to enter the U.S. market, Mr. Donner noted. On the other hand, they don’t have more attractive markets to look at, he said.

“The biggest change from my vantage point is that there is more competition,” said Douglas Traynor, a managing director at Aareal, who works out of its New York office.

The Wiesbaden, Germany-based bank, which reentered the U.S. market in 2010, has kept a consistent loan volume of about $1.8 billion in U.S. commercial real estate debt over the past two years.

“There were a lot of lenders who were not lending during the crisis and now that the economy has improved and the economic fundamentals have improved, there are a lot of new entrants,” Mr. Traynor said. “It is certainly a very competitive environment.”

In the U.S., DekaBank’s Ms. Hönicke said she likes the business environment and believes the country’s economy is on a good path. “In property, the vacancy rate has gone down,” she said.

DekaBank has been active in the U.S. market since 2007. The company aims to keep the amount of the American share of its global lending volume between 20 and 30 percent, Ms. Hönicke said.

For German lenders, remaining in the U.S. is strategically important.

“Compared to Europe, the U.S. offers attractive risk-adjusted returns in conjunction with healthy market transparency and a solid legal environment,” said Leonard Crann, general manager of Landesbank Baden-Württemberg’s New York branch. “With respect to the geopolitical environment, the U.S. is generally regarded as a safe haven for foreign investors and real estate is the desired asset class.”

So long as client demand grows, LBBW will “increase its commitment to the U.S. market,” Mr. Crann said when asked about the Greek crisis.

In order to decrease risk across the board, a growing number of German banks are doing syndicate deals involving multiple lenders. In February, DekaBank and LBBW teamed up to provide $278 million of debt for Jamestown Properties’ $500 million acquisition of the two-building office complex America’s Square in Washington, D.C.

Aareal’s Mr. Traynor said that looking at more syndicate deals is a strategy to hedge against competition.

“The general trend is that banks are trying to make deals with other banks, since they don’t want too much exposure,” said HFF’s Mr. Cassum. “They are trying to spread their risk around and do multiple deals with many different borrowers.”

Don’t Call It a Comeback

Participating in other lenders’ deals will also become a key strategy for the lenders that are planning to return to the U.S. real estate market.

Among the German banks rumored to be considering a comeback is Munich-based Bayerische Landesbank. However, a spokesman for the bank denied such claims.

Münchener Hypothekenbank, another Munich-based lender, had a $4.5 billion U.S. book of real estate debt until the crisis, said Guido Zeitler, the bank’s head of international debt investments. That origination of new loans completely stopped in 2009, but now the company is considering a return.