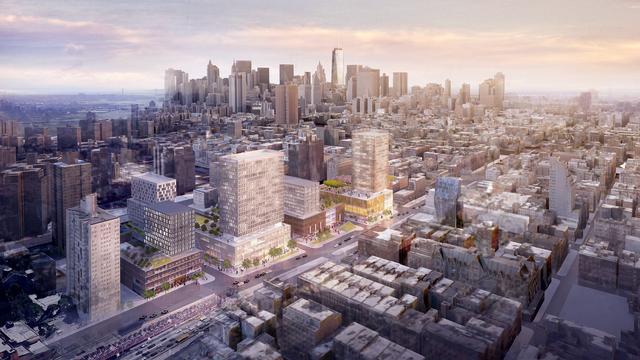 A rendering of Essex Crossing. billygray

Delancey Street Associates, the joint venture developing Essex Crossing, is about to get one of its biggest construction deliveries: a truck full of cash.

L+M Development Partners, BFC Partners and Taconic Investment Partners received more than $250 million in construction financing on Tuesday for their 1.9-million-square-foot mixed-use project on the Lower East Side, Commercial Observer has learned.

The debt from Wells Fargo and Citibank allows Delancey Street Associates to move forward with residential and retail developments on two of the project’s nine sites, which span four blocks from Ludlow Street to Clinton Street. Construction on Sites 2 and 5, which began earlier this year, will eventually lead to 400 rental apartments, half of which will be designated as affordable housing for low- and middle-income residents.

Wells Fargo provided a $109 million construction loan for work at Site 5, a 211-unit apartment building that will consist of half market-rate and half-affordable rentals, according to the lender. The three-year construction debt covers about 75 percent of the $142 million project, which also includes 66,000 square feet of retail.

“During the whole request for proposal process that the city ran to select the developers, the local community was very involved in the type of retail space that would be offered in these projects,” said Duane Mutti, a senior vice president at Wells Fargo Community Lending and Investment. “That’s very much needed retail space for the community, and they were very involved.”

Delancey Street Associates additionally closed a $144 million construction loan from Citibank with $15 million in tax-exempt bonds from the New York City Housing Development Corporation for work at Site 2, according to another person familiar with the deal. The Citibank loan covers about 55 percent of Site 2’s $264 million project cost, which includes construction of 195 rental apartments and 188,000 square feet of retail space, that person said. As with Site 5, those apartments will be split between market-rate and affordable units. Wells Fargo is buying the tax credits on Site 2 for $13.9 million, the company confirmed.

The retail space at Site 2 will provide a new home for the 75-year-old Essex Street Market. The longtime public market will stay in its current location at 120 Essex Street between Rivington and Delancey Streets until the new facility is completed and handed over to vendors in 2018, according to the New York City Economic Development Corporation.

The retail space also includes Regal Cinemas, which inked a deal in December to open a 14-screen theater at 115 Delancey Street as part of Site 2. Regal Cinemas loaned itself $6 million to build the 65,000-square-foot theater, sources involved in the deal told CO.

Messrs. Mutti and Wiener said the lending activity is part of future work with the developers on Essex Crossing. Wells Fargo has bid and is in the process of closing a deal to finance construction and buy the Low-Income Housing Tax Credits for Site 6, they said. That deal includes $42 million in debt and $26.5 million of equity from the tax credits. Those units will be allocated for senior housing.

“We are finalizing that deal and moving towards a closing with the borrower,” Mr. Mutti said.

Several of the sites have sat dormant for close to 50 years following the demolition of several tenements. Area residents and the city government debated over what to do with the plots until the city named Delancey Street Associates the developer in late 2013, as The New York Times reported. The joint venture agreed to pay the city $180 million for the sites.

“Tuesday’s closing marks the culmination of a 48-year community revitalization effort on the Lower East Side,” a Delancey Street Associates spokesman said regarding the Wells Fargo and Citi loans. “It’s been a long time coming, but now the work of bringing back this long-dormant corner of the LES can begin.”