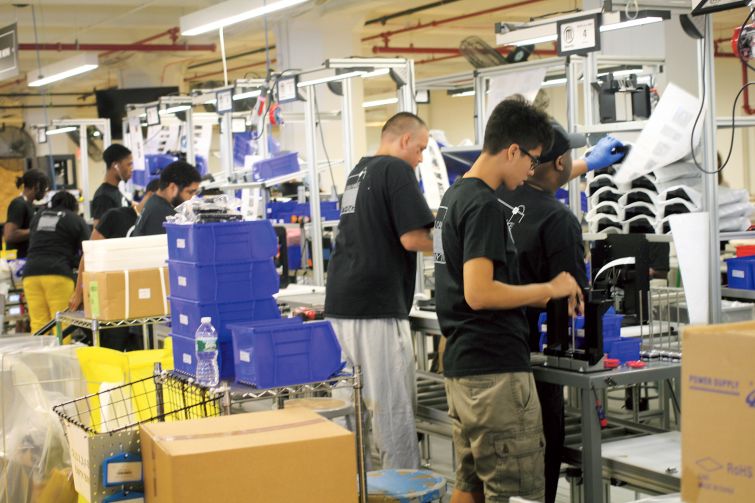 Makerbot has opened in Industry City, offering a different feel than the factories of old. (Photo: Brady Dale/Commercial Observer). tcullen2015

Factory work at Makerbot is nothing like the dirty, crowded image of yesteryear. Its new Sunset Park factory at 147 41st Street, between 1st and 2nd Avenues, is bright, clean and well-ventilated. In fact, one of the most striking features of the large space—where workers build the company’s 3D printers—are the Lexington, Ky.-made Big Ass Fans hanging from the high factory ceilings, well above its assembly teams, shifting cargo containers worth of air through the largely window-lit room.

The six-year-old company opened the new space to a tour for the press and members of the community last week.

The Brooklyn-founded company, now a division of Minneapolis-based Stratasys, has expanded its footprint at Belvedere Capital, Jamestown and Angelo Gordon’s 6-million-square-foot Industry City complex, from its original 80,000-square-foot space, with an additional 170,000 square feet of space, bringing its total area in the complex to 250,000 square feet. It had previously assembled 3D printers in a much smaller space, which it now uses for confidential new product testing, according to Scott Crouthamel, from the Makerbot operations team.

“We’re very vertical here,” Mr. Crouthamel explained as he led the tour. “All lines start at the outside and finish in the middle.” That’s because that’s where the freight elevators are located. Unlike factories based in middle America that can take up one continuous space, Makerbot has to move its products up and down for the manufacturing process.

The factory layout was designed in-house; it is still developing its process, applying what’s known as lean manufacturing to every aspect of the factory floor. Workers and management are working closely together to find ways to make process improvements, which means that the layout of the floor itself is never 100 percent set.

For example, Mr. Crouthamel pointed out how the largest 3D printer in the company’s line, the Z18, is assembled on top of moving dollies. This enables the large machines to be moved and repositioned more efficiently and safely, easing strain on the workers and reducing the chance of cosmetic damages.

Significant parts of the factory floor are also devoted to quality testing. Critical pieces of equipment, in particular, the extruder (the part that softens and applies the filament onto the printing surface), are given a test run before finally being packaged for the consumer.

On the very outer edges of most sides of the floor, there are office spaces, designed by MKDA, including a large area featuring over 20 work stations for non-assembly members of the operations team. It also features a large break area, which doubled as a theater for the presentation that preceded the tour.  The break area has iPads and 3D printers available to staff.

The buildings have both redundant Internet access and redundant power, allowing the sites to stay operational even in adverse conditions.

In March, Industry City Chief Executive Officer Andrew Kimball unveiled a billion-dollar plan that will transform the complex into an international destination.