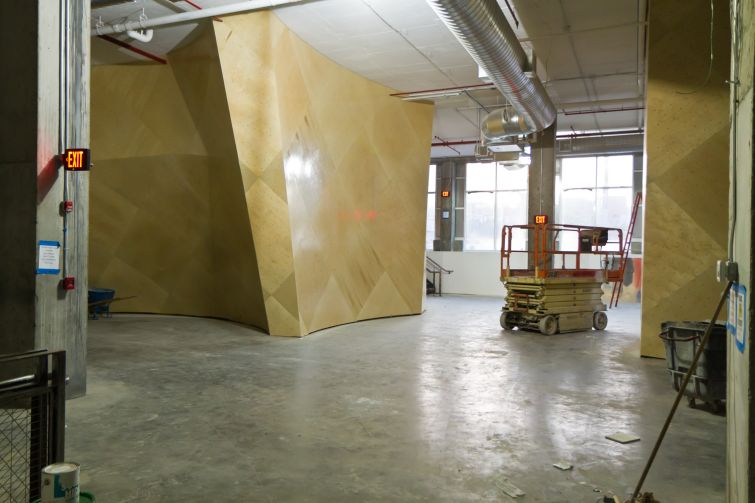 A new type of gym is rocking the foundation of a Long Island City residence… literally.

Brooklyn Boulders is set to open its fourth location—this time as a building amenity for the new Long Island City high rise at 23-10 41st Avenue between 23rd and 24th Streets. This isn’t just your treadmill and elliptical gym, but part rock climbing facility, part event space and part coworking space. And the new 25,000-square-foot gym could start being incorporated into future building designs.

“You can stay in our facility for five or six hours that way, as opposed to the typical gym model of getting you in and out as soon as possible,” said Lance Pinn, the co-founder of Brooklyn Boulders.

Construction started on the gym this November, and is expected to have a grand opening by September. Like the rest of Brooklyn Boulders locations, the Queensbridge site was designed by the company’s chief development officer, Chris Ryan, whom Mr. Pinn describes as a legendary rock climber in his own right.

With ceilings more than two stories high, the facility offers various rock climbing activities, as well as yoga classes and personal training. Utah-based Vertical Solutions installed the walls for Brooklyn Boulders, as with its locations in Boerum Hill, Boston and Chicago.

Mr. Pinn said the design of 23-10 41st Avenue already had those high ceilings in place (in order to get residents pristine views of Manhattan), which was “kind of a match made in heaven for us.”

In the future, Mr. Pinn said he hopes to work with developers on the initial design of a building with the plan for a Brooklyn Boulders pre-conceived in the retail or commercial space of a building.

But those designs aren’t just limited to walls that curve every which way for maximum climbing abilities. Brooklyn Boulders sites also doubles as coworking space able to house 30 to 50 workers with workstations including shared tables and standing desks.

“We do have several entrepreneurs that meet at our gym every single day and do work,” Mr. Pinn said. “People are bringing in laptops while doing rock climbing and other gym [activities]. If you don’t get that 15 minutes of work done, you can have a really unproductive climbing session or gym session.”

Fees aren’t necessarily set in stone; Mr. Pinn said the charge for doing business at Queensbridge or other locations is a mere conversation with one’s neighbors and five pushups or sit-ups per hour.

In the midst of everything else, Brooklyn Boulders Queensbridge will also have event and art space capable of holding 500 people. Other locations have hosted the likes of Queens-based rapper Action Bronson, who performed at the Boston-area location. (Since this site isn’t too far away from the Queensbridge Houses, where rappers like Nas and Mobb Deep got their start, Mr. Pinn said they’re more than welcome to drop by the space for a show, too.)

Mr. Pinn said visitors can expect to see most of the walls covered in graffiti tagged by street art veterans.

There’s also going to be white space, however, for artists to display their work, which will be up for sale and able to take home.

“You can expect all of the drywall to be covered in graffiti, except for certain areas” for art displays, Mr. Pinn said. “It’s good exposure for our artists and also makes it a cool location for people to be in.”