Rent Is For Suckers! Restaurateurs are Buying Instead of Renting 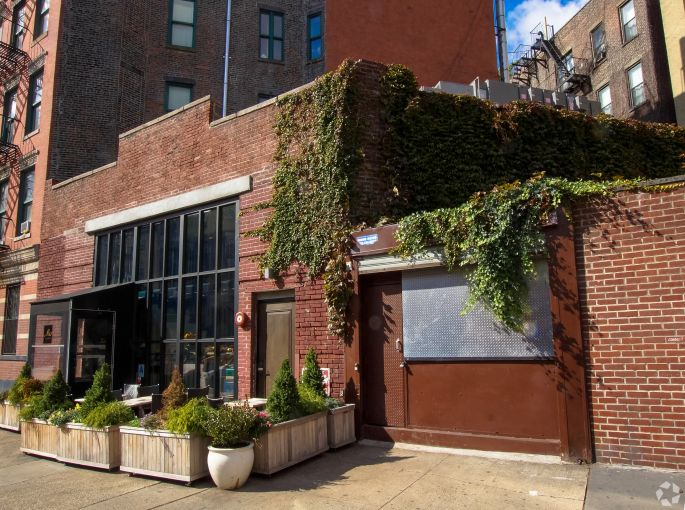 When chef Galen Zamarra, his business partner Eric Blinderman and their eight other investors opened Mas (farmhouse) at 39 Downing Street in 2004 they held a 10-year lease with no renewal option. And that was fine.

“Ten years seems like the end of time when you’re 24,” said Mr. Blinderman, referring to the then-age of many of the owners. “But in the course of a business it’s a blink of an eye.”

Particularly one with significant start up and operational costs and slim profit margins. “Opening up a restaurant is a large investment so you need a successful concept with a long lease to recoup your initial investment,” said Andrew Rigie, the executive director of New York City Hospitality Alliance, a three-year-old nonprofit group representing restaurants, hotels and bars.

Consult any retail broker specializing in restaurants and you’ll hear the same: savvy restaurateurs demand leases with a 10-year minimum.

“Whether you put in $200,000 or $2 million you want to amortize that cost over as long a time as possible. You have to get your name out; you have to build a customer base; you do not want to get kicked out too soon,” said Winick Realty Group’s Josh Siegelman. Fortunately, he added, most landlords want a long lease too so they don’t have to go through the process too frequently of paying brokers and losing money on dead time.

Mr. Blinderman said their landlord was amenable to an extension, at a premium that would likely have put them out of business. And theirs was a restaurant winning the game, experiencing success; a good problem to have, you’d think. “That’s the scary part,” said Mr. Blinderman. “We have friends and colleagues who built these tremendous institutions; then it’s gone. The restaurant industry is disguised as real estate transactions.”

Mr. Zamarra noted the difficulty of moving a successful established business of any scale. Think of the near-disappearance of Le Cirque. “It’s years of planning to move so the lease really became a concern early on.”

And so the Mas (farmhouse) owners agreed the best chance of long-term survival was property ownership, the dream of most every restaurateur.

Douglas Elliman residential broker Paul Zweben was a chef for 18 years, running such restaurants as Calle Ocho and BLT Prime, where he remains a partner. “If I had the opportunity to buy any of those spaces I would have. If you’re the landlord you essentially have two separate businesses. If, god forbid, the restaurant goes under you can lease to another restaurant.”

Mr. Zweben cited the typical 3 percent rent escalation as a seemingly small but significant annual increase, especially when the compounding effect is calculated. Even if you’re busy all the time and have tight control of food and other costs, he said, that’s a jump over five, 10, and more years of a lease. Plus, he added, the landlord has all the control. “Let’s say you’re killing it but a developer buys the building; you’re done.” For this 30-year restaurant industry veteran, owning the space is always the best option, unless the property is overpriced.

“But it’s not usually what people have the ability to do,” said Mr. Siegelman, one of the city’s most active restaurant brokers; 99.9 percent of the calls he receives from the restaurant industry are lease seekers. The good news is there’s a serious upside to leasing: availability. Even if you’re in the market for a complete building, they don’t come up as frequently, especially not for those with specific geographic requirements.

Another leasing upside: often in the city basement-level space is free. “If you can bring in an architect and an engineer, and it has the right bones, a basement can be usable,” said Mr. Siegelman who helped Mah Ze Dahr Bakery (operating out of Tom Colicchio’s commissary) lease 28 Greenwich Avenue, a bi-level former spa. The $15,000 monthly asking price was all about the 900-square-foot ground level, which the bakery intends to use for retail. The 1,340-square-foot basement was bonus and is being converted to a kitchen. Both will open this summer.

“With leasing, the terms are clearly defined and your real estate expenses fairly predictable,” said Bob Dunphy, a Transworld Business Advisors of New York broker, acknowledging the threat of a huge rent increase. “You are only responsible for the space you use. You can expand or relocate if you grow without having property to sell or lease. You can focus on your core business. Owning a building is a business in itself and it’s expensive to own a space in New York City: you need to rent the space you don’t use, maintain the building, deal with city inspectors and property tax, and so forth.”

Chef David Waltuck agreed. Last summer Mr. Waltuck and his business partner George Stinson opened Elan at 43 East 20th Street. There are many differences between Elan and their previous restaurant Chanterelle but the most notable is this: Elan is in a rented space. “Even if you’re paying key money it’s less of a hassle and less expensive,” said Mr. Waltuck. “There are so many rules.”

In 1988, after nearly 10 years operating on Grand Street in Soho, and motivated by an unpleasant personal (not financial) landlord experience, Mr. Waltuck and other investors purchased the retail condo space at 2 Harrison Street for $1.4 million. The real estate market crashed shortly after. Years passed. The value came back, exceeding what they paid for it, only to slump again just around the time the space was sold in 2010. “That’s real estate,” he said.

At the same time the Mas (farmhouse) owners were benefiting from the market’s collapse. In 2008, said Mr. Blinderman, (who receives a few calls every month asking if he wishes to sell) the 34-foot-wide, two-story townhouse at 28 Seventh Avenue South (1,500-square-foot main floor, 800-square-foot mezzanine, 1,500-square-foot basement) was listed for between $7 and $8 million. By 2010 it was in their range. Mr. Blinderman et al. purchased the building for $2.6 million.

“Most of the people I know who own restaurants and their space were able to take advantage of a real estate deal years and years ago when you could buy a building for less than $3 million,” said Lauren Cangiano, a 28-year residential broker at Halstead Property who opened Tre Otto in a 1,000-square-foot space at 1408 Madison Avenue with her husband in 2010.

“If I had the millions to buy a building I would not be in the restaurant business,” she said, half-joking while mentioning the potential rental income throughout.

A fire shut down Tre Otto in 2013, and ended the lease. The couple bought the neighboring business, at 1410 Madison Avenue, assuming the existing 10-year lease, renovating the 2,000-square-foot space and reopening earlier this year.

“Every day I look at other restaurants and wonder what they’re paying for rent,” she said. “I’m seeing very small places open tiny little outposts. I’m seeing second-floor and basement spaces. Do they make a lot of money? Probably not. You can make a good living if you take good care but this isn’t a business for gazzillionaires. And the climate now isn’t right for buying.”

Timing is only one reason the Mas (farmhouse) story is so interesting. The purchase and renovation of 28 Seventh Avenue South—about $3.6 million in total—happened with $720,000. Recipients of a CDC/504 Loan, administered by the Small Business Administration, the owners needed only 20 percent of their costs. Coincidentally, that’s how much they spent on upfront leasing and renovation at 39 Downing (thanks to a similar New York Business Development Corporation program enabling them to start-up with only 20 percent down, in that case $144,000).

Lack of inventory, not economics, is the biggest barrier to property purchase, agreed the partners. Luck also plays a role.

“The ability to buy is not something everyone can do, but the SBA can help,” said Mr. Zamarra. And it’s worth checking into. “The P&L looks the same with rent and mortgage but if $10,000 is going to equity it’s like going to a bank account.”

They used their new, second space—where they opened Mas (la grillade) in 2011—as leverage in lease negotiations at their original space. “We had the ability to explain that we could move close by.”

And every mortgage check is in an investment in their “forever home” where the cost of operating goes down each year, said Mr. Blinderman. “We’re hopefully in this for 30, 40, 50 years.”

Their second concept, however, including grills that emitted smoke too close to neighbors, was not as well received as their first (though there was initial critical acclaim). Three years in, sales were not where they needed to be. Again, the owners made a risky decision: shut down; start again.

“If we had seven years left on a lease the numbers wouldn’t add up. They’d equal you’re exiting, you’re out,” said Mr. Blinderman.

“When you own the building you don’t need permission from the landlord for projects. Smoke remediation needed an instant fix. We would have gone out of business in the first few months if we had to ask permission,” said Mr. Zamarra.

Instead, free to operate when and how they wished, they closed last April, completely renovated, changing design and concept, and opened Almanac in November. It’s a seasonal, ingredient-focused (meaning when-available only) modern American restaurant that’s been in the top five on OpenTable since day one.

Business sense and luck aside, passion is at a restaurant’s core. While talking to Commercial Observer, Mr. Blinderman remembered he needed to ask Mr. Zamarra about the sauce on a lamb dish he’d eaten the night before. “You have to try it,” he said enthusiastically.

And you might try their business strategy, too. “Everyone’s situation is unique but it’s not an impossible endeavor to protect yourself over the long term. It may well be that purchasing is cheaper than leasing,” said Mr. Blinderman. “The success or future success of a restaurant business depends on the landlord.”