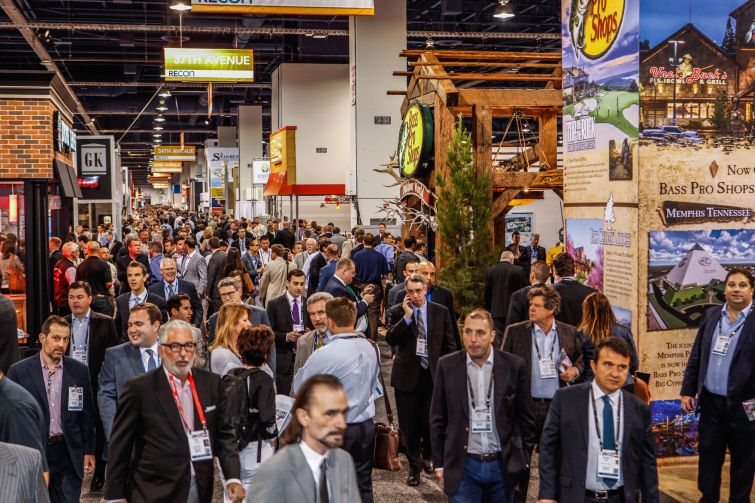 “Nobody goes there anymore. It’s too crowded.”—Yogi Berra, possibly talking about the cabana parties in Las Vegas at ICSC.

Approximately 36,000 real estate professionals attended the ICSC annual convention in Las Vegas this May. That number is more like 50,000 when you count the people who came simply to attend the private parties held at the nightclubs as well as the now-infamous cabana parties. Hearing these stories usually gets my Spidey sense tingling in the contrarian area of my brain. Proclamations of a bubble and that this “surely signifies a top” are commonly associated with these “record-breaking numbers.” However, after digging through the data, the facts reveal that this rally in retail investing surely has legs, and the contrarian brain may, for once, be overactive.

Stories of retail’s demise have been greatly exaggerated

It all comes down to supply and demand. Demand is strong for high-quality retail investments after a decade of (1) being underweighted by pension funds and other institutions, (2) unfounded fears of more bankruptcies after Borders and Circuit City filed (Radio Shack notwithstanding), (3) the long-rumored death of the mall and the rise of Internet sales making retail extinct and (4) while national retail sales have been flat or down in four of the first five months of 2015, they have been up in the long term—up 12.9 percent since 2011.

The accepted wisdom was previously that bankruptcy fears and Internet sales were reason enough to give the retail a higher cap rate (excluding grocery-anchored centers which were always in high demand) than multifamily or office. But investors seem to have come around to the fact that the naysayers are just that. As for the supply…when was the last time you heard about a new mall under construction? Taubman is building one in Sarasota anchored by Saks Fifth Avenue but you’d have to think hard to find another. And how about a power center (unenclosed mall) that wasn’t primarily pre-leased? Another rarity. And what about space demand? Vacancy rates across the U.S. are only 4.7 percent for malls and 5.4 percent for power centers (source: CoStar Group). Those stats hardly augur a sector’s demise.

Meanwhile, investors are hungry for yield. Funds that can invest in all property types can often find better yield in retail without having to incur the risk that, say, an operating business like a hotel can. “Cap rate creep,” has started to occur in retail as the retail cap rates compress slowly towards that of multifamily and office.
Obviously, it’s dangerous to generalize too broadly, as grocery-anchored centers and well-located power centers can’t simply be lumped in with old malls in a tertiary market. The latter continues to be out of favor and probably will be for the foreseeable future.

On the stock market side, it must be noted that shopping center REITs are back in vogue after being shunned during the 2009 doldrums. These REITs now trade between eight times and 22 times funds from operations (with high-quality Federal Realty Trust an outlier at 26 times). So stock investors are taking note of the increased optimism in retail too.

The financing market for retail

The retail financing industry is also aiding the retail sector. And it’s more than just historically low interest rates that are helping it along (though that certainly helps). CMBS has long been the bellwether of retail center financing as life companies have often eschewed all but the AAA retail assets. CMBS shops had two problems here recently. One was volume. While CMBS has picked up considerably since the dark days of 2009, it still didn’t break $100 billion in 2014 ($90.5 billion in 2014 and $86 billion in 2013, according to figures from Commercial Mortgage Alert). Second, B-piece buyers would downgrade any securitization where perceived lower-quality retail comprised more than 20 percent or so of the pool.

Both of these trends are reversing, however. First, total CMBS volume topped $35 billion in the first four months of 2015 (versus $21 billion at the same point last year), while B-piece buyers are getting more comfortable with a larger portion of the securitization being in retail. As an example, Wells Fargo Commercial Mortgage Trust 2015-C28, which just closed on May 21, 2015, had 33.8 percent of its pool in retail loans. Granted, this is quality retail, as this securitization included an 879,000 square feet portfolio of Stanley Kroenke-owned power centers and a 422,000-square-foot power center in Salinas, Calif. The $1.16 billion securitization went off at or above expectations. The Kroll-rated BBB-tranche went off at Swaps plus 355 with KKR the B-piece buyer, with several cover bidders.

The takeaway? B-piece buyers are more and more comfortable with retail, and securitization volume is surging. For the borrower, a typical full leverage CMBS quote today on a retail center that passes the sniff test is 10-year swaps plus 185 basis points. That’s a 5.12 percent coupon as of June 1’s writing. And since two years of interest only is easily achievable, that’s a lot of positive leverage based on cap rates in the high 6s and 7s on typical retail centers.

Commercial banks are also trying to compete with the securitized lenders and can also be well inside the conduits if the borrower is fine with a five-year deal. And if you need mezzanine or preferred equity on top of the first mortgage, that could now be achieved at a rate in the high single digits. The market is a far cry from the old days (five or six years ago) where you had to pay those subordinate lenders a yield in the teens.

Now, it’s not all unicorns and rainbows for retail, and there will surely be bumps in the road. Sears- and JCPenney-anchored malls in tertiary markets still can’t be financed at more than 50 percent LTV (if at all) by a conduit. And the threat of retail bankruptcies still looms. Sears is undoubtedly troubled. Selling some of their boxes back to Simon Property Group and General Growth Properties helps their liquidity short-term but doesn’t solve their long-term problems. Some speculate that casual wear purveyor Aéropostale will be the next retail bankruptcy victim. However, these fear mongers only help to prevent a bubble, by keeping a cap on any prospective feeding frenzy.
The aforementioned fundamentals indicate that the increased optimism in retail is well founded and should continue throughout 2015. Yes, the retail market will continue to be bifurcated between the haves and the have-nots. The latter will still occur enough to keep deadmalls.com up and running. But the demise of retail has indeed been greatly exaggerated.

Dan E. Gorczycki is a senior director for Avison Young, where he specializes in acquisition financing, construction loans and joint venture equity raises, especially in the retail sector.