Another Recession on the Way? Say It Ain’t So 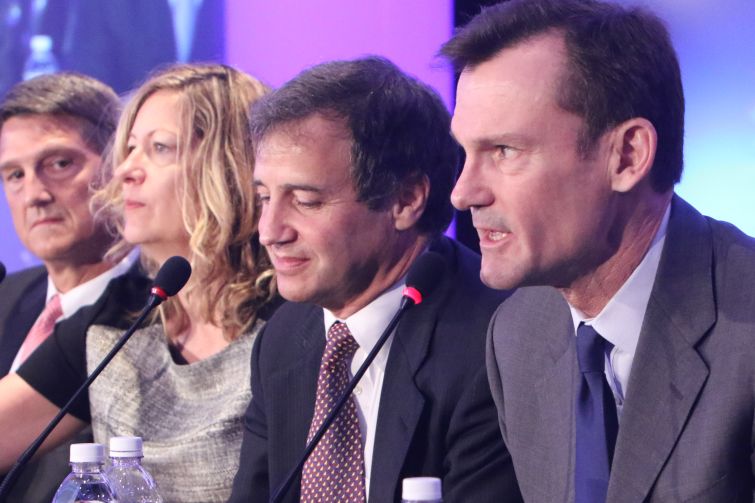 A group of panelists speak at CREFC. dghigliotty

Conversations at the CRE Finance Council’s 2015 New York conference took an unexpected turn this week with more than a dozen panelists cautioning that another economic downturn could hit the U.S. before 2020.

“Lending is becoming overheated again,” said one speaker, who asked not to be identified. “Competition is overwhelming disciplined market practices and credit quality is deteriorating.”

That comment came after a room full of real estate lenders agreed almost unanimously by a show of hands that the country is likely to experience another downturn in the next three to five years, according to people who were in attendance.

“We’ve never had an economic expansion in the U.S. that has run longer than 10 years and we are six years into our current recovery when you look at GDP,” said Sam Chandan, chief economist of Chandan Economics and a columnist for Commercial Observer. “Either this recovery is the outlier or we’re due for a recession in the next four years.”

Mr. Chandan said that working to improve financial regulations now could help mitigate pressures on borrowers and lenders whenever the next downturn occurs. “One of the shared concerns is that our financial regulatory system is as complicated as our lending environment, and in many ways fragmented,” he said.

While many at the conference spoke candidly about their concerns, some shrugged off the idea of a potential downturn as an inevitable outcome.

“It’s called a cycle for a reason,” said Richard Jones, a partner the global law firm Dechert LLP and chair of its finance and real estate group. “We are going to replicate the past, because the business we are in has not fundamentally changed, despite Elizabeth Warren’s best efforts.”

One banking executive at a large financial firm noted that while the level of competition among lenders gives the market the appearance of 2006 and 2007, leverage among banks is down and reform measures like Basel III and Dodd-Frank have helped temper risky lending.

Nonetheless, macro geopolitical factors could take their own toll, according to a person with little stake in the commercial real estate market.

“My biggest concern in three to five years from now is the U.S. overreacting to a global event and overspending money and resources to fix things in our image,” said foreign policy specialist Ian Bremmer during a keynote speech at CREFC. “Something akin to us going to war with Iraq after September 11.

“The weaponization of finance by the U.S. is another problem that could cause troubles ahead,” he added, referring to the U.S. government threatening billions of dollars in fines on foreign banks for violating American laws.

Others more entrenched in the real estate industry warned of troubles in the commercial mortgage-backed securities business. Two conference attendees referred to the CMBS market as a “boiling frog”—a reference to the notion that a frog will sit still in a pot of water as it slowly comes to a boil, killing itself before it can react.

“CMBS underwriting quality is starting to creep down right under our noses,” said one panelist, who asked not to be identified.

Another panelist said the U.S. CMBS market is “broken” and fails to meet borrower expectations. “I think they can repeat the mistakes of the past and get away with it,” that panelist said.