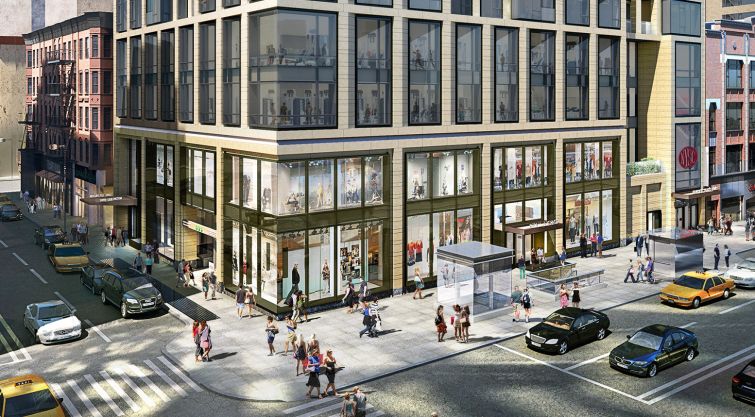 Rendering of what will come at 147 East 86th Street. Image: Ceruzzi Properties

A new $340 million, 230,000-square-foot HOK-designed mixed-use development is coming to the northeast corner of East 86th Street and Lexington Avenue.

The residential portion of the building, on floors five to 20, will be home to 50 luxury condominium units, developer Lou Ceruzzi of Ceruzzi Properties, a partner in the project primarily responsible for the retail component, told Commercial Observer. There will be about 30,000 square feet of retail space on the ground, second and lower levels of the building to be erected at 147 and 151 East 86th Street (it will use the address 147 East 86th Street). New York Sports Clubs will occupy 24,000 square feet on the third and fourth floors through a sale-leaseback. The asking rent for the commercial portion is $10 million net a year, said Ripco Real Estate’s Andrew Mandell, who is marketing the retail space.

“At the end of the day, the retail box that we’re having Andrew lease is spread over the basement, first and second floors,” Mr. Ceruzzi said. “Ultimately that will be owned by the Goldman estate and sublet to us for the same price we paid for the ground lease. The reason is so that condo association has title to both parcels and so we can sell condo units above on floors five and up that are not subject to any ground lease.”

The project’s design is being finished now, but it will include two- through five-bedroom units with asking prices of $3,000 per foot, Mr. Ceruzzi said. There will be 10,000 square feet of residential amenity space including a small health club, children’s playroom, movie room, lounge and 1,500-square-foot rooftop garden terrace. The penthouse units will have 1,500 square feet of rooftop space for private use.

“It’s a very, very well-designed building with fantastic amenities, really the highest end of finishes,” Mr. Ceruzzi said, including marble and granite in the kitchens and marble in the bathrooms.

At the same point, the health club leased the entire property, paying $750,000 annually now. That rent will increase to $1.7 million per year in the new building, Mr. Ceruzzi said. This March the trio also purchased 19,315 square feet of development rights from 1283-1291 Lexington Avenue for $12.4 million plus 6,535 square feet of footprint rights for $1.6 million. It is in the process of buying inclusionary rights.

“We’re looking to have a spot for a world-class retailer on a very important corner in New York City,” Mr. Ceruzzi said. “I expect that the retail component of our transaction will have one or more retailers on the first floor and at least one of the retailers will merchandise out of the lower-level space also.”

“We needed to do something with the space rather than let it just sit sallow while we do our plans,” Mr. Ceruzzi said. “I think it worked out well for us and them.”

The building’s design calls for the Lexington Avenue side of the sidewalk to be expanded and the subway station entrance rebuilt plus the addition of a subway elevator kiosk serving disabled residents.

“That could be the best residential corner in the entire United States because it sits in what I would argue is the densest residential population in the United States in terms of a neighborhood,” Mr. Mandell said. “It sits on top of one of the busiest subways in the New York subway system.”

Demolition of the two buildings is slated to commence in nine months with construction being completed in 30 months.