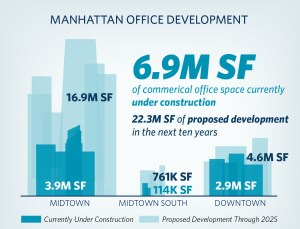 Midtown construction is dominated by Far West Side development, led by the 1.7 million-square-foot building at 10 Hudson Yards, which is scheduled for completion in early 2016, and is 78 percent pre-leased. Also, 55 Hudson Boulevard, a 1.6 million-square-foot building, has an estimated completion date of mid-2017 and is still searching for an anchor tenant. But recently, two much smaller buildings have been stealing the headlines from these mega-towers, both of which are expected to complete construction before the end of this year. At 7 Bryant Park, the Bank of China committed to lease 40 percent of the 472,000-square-foot building. Also, just last week, Nike signed a lease for the entire office portion of 855 Avenue of the Americas, totaling 147,000 square feet. Currently, the only building under construction Downtown is Tower Three at the World Trade Center development site; however, the 2.9 million-square-foot tower has not signed a new tenant since Group M leased 31 percent of the building at the end of 2013.

Recently, some future development sites have secured anchor tenants. At the Far West Side development, Skadden, Arps, Slate, Meagher & Flom LLP signed a 20-year lease for 550,000 square feet at 1 Manhattan West, which accounts for 25 percent of the 2.1 million-square-foot tower. Not to be outdone, Downtown could steal another Midtown Sixth Avenue tenant, as News Corp and 21st Century Fox are considering a move to Two World Trade Center. Locking in an anchor tenant at the 1-million-square-foot tenant would start-up construction at the site beyond the eighth floor.